Nuclear magnetic resonance plays an important role in the fields chemistry, materials science, physics and engineering. It is becoming a more and more useful method to probe the structure of molecules. The primary object of this module is to understand the fundamental concepts of NMR. It is assumed that the reader already understands the quantum numbers associated with electrons. For a more basic understanding of how NMR works, the reader is directed to the NMR introduction page.

Nuclear magnetic resonance, NMR, is a physical phenomenon of resonance transition between magnetic energy levels, happening when atomic nuclei are immersed in an external magnetic field and applied an electromagnetic radiation with specific frequency. By detecting the absorption signals, one can acquire NMR spectrum. According to the positions, intensities and fine structure of resonance peaks, people can study the structures of molecules quantitatively. The size of molecules of interest varies from small organic molecules, to biological molecules of middle size, and even to some macromolecules such as nucleic acids and proteins. Apart from these commonly utilized applications in organic compound, NMR also play an important role in analyzing inorganic molecules, which makes NMR spectroscopy a powerful technique.

But the a major question still remains- Why does NMR work? This module will begin by developing the concept of nuclear spin then moving into a discussion about energy levels and the relative populations and the interactions of a nucleus with the magnetic field.

The concept of spin is regularly addressed in subatomic particle physics. However, to most people spin seems like an abstract concept. This is due to the fact there is no macroscopic equivalent of what spin is. However, for those people who have taken an introduction to chemistry course have seen the concept of spin in electrons. Electrons are subatomic particles which have spin intrinsic to them. The nucleus is not much different. Spin is just another form of angular momentum. The nucleus consists of protons and neutrons and neutrons and protons are comprised of subatomic particles known as quarks and gluons. The neutron has 2 quarks with a -e/3 charge and one quark with a +2e/3 charge resulting in a total charge of 0. The proton however, has 2 quarks with +2e/3 charge and only one quark with a -e/3 charge giving it a net positive charge. Both protons and neutrons are spin=1/2.

Here are some examples using the isotopes of hydrogen

For larger nuclei, it is not immediately evident what the spin should be as there are a multitude of possible values. For the remainder of the discussion we will attribute the spin of the nucleus, I, to be an intrinsic value. There are some rules that the nuclei do follow with respect to nuclear spin. They are summarized in the table below.

The projection of the vector on the z axis (arbitrarily chosen), takes on discretized values according to m, where

The angular momentum along the z-axis is now

Pictorially, this is represented in the figure below for three values of \(I\).

The quantum numbers of the nucleus are denoted below.

Magnetic Moment of a Nucleus

We have now established that the nucleus has spin which can be denoted using specific quantum numbers. As with all charged particles, if the nucleus is moved in a loop it will generate a magnetic field. The magnetic moment \(\mu\) is related to the angular momentum of the nucleus by

The net or bulk magnetization of the sample is given by \(M\) and is the sum of each individual magnetic vector, or

since these magnetic moments are vectors and are randomly aligned, the bulk magnetization arising from the nucleus is zero. There may be unpaired electrons which give rise to paramagnetic, anti ferromagnetic, or ferromagnetic properties. However, if an external magnetic field is applied, the nuclei will align either with or against the field and result in a non-zero bulk magnetization.

In the absence of a magnetic field the magnetic dipoles are oriented randomly and there is no net magnetization (vector sum of µ is zero). Application of an external magnetic field, as was shown above, creates distinct energy levels based on the spin angular momentum of the nucleus. Each energy level is populated by the spins which have the same angular momentum. To illustrate this, consider a I=1/2 system. There are two energy levels, +1/2 and -1/2, which are populated by spins that have aligned against or with the external magnetic field, respectively.

The energy separation between these states is relatively small and the energy from thermal collisions is sufficient to place many nuclei into higher energy spin states. The number of nuclei in each spin state can be described by the Boltzmann distribution. The Boltzmann equation expresses the relationship between temperature and the related energy as shown below.

Where Nupper and Nlower represent the population of nuclei in upper and lower energy states, E is the energy difference between the spin states, k is the Boltzmann constant (1.3805x10-23 J/Kelvin ) and T is the temperature in K. At room temperature, the number of spins in the lower energy level, N lower, slightly outnumbers the number in the upper level, N upper.

The selection rule in NMR is

which is illustrated below. 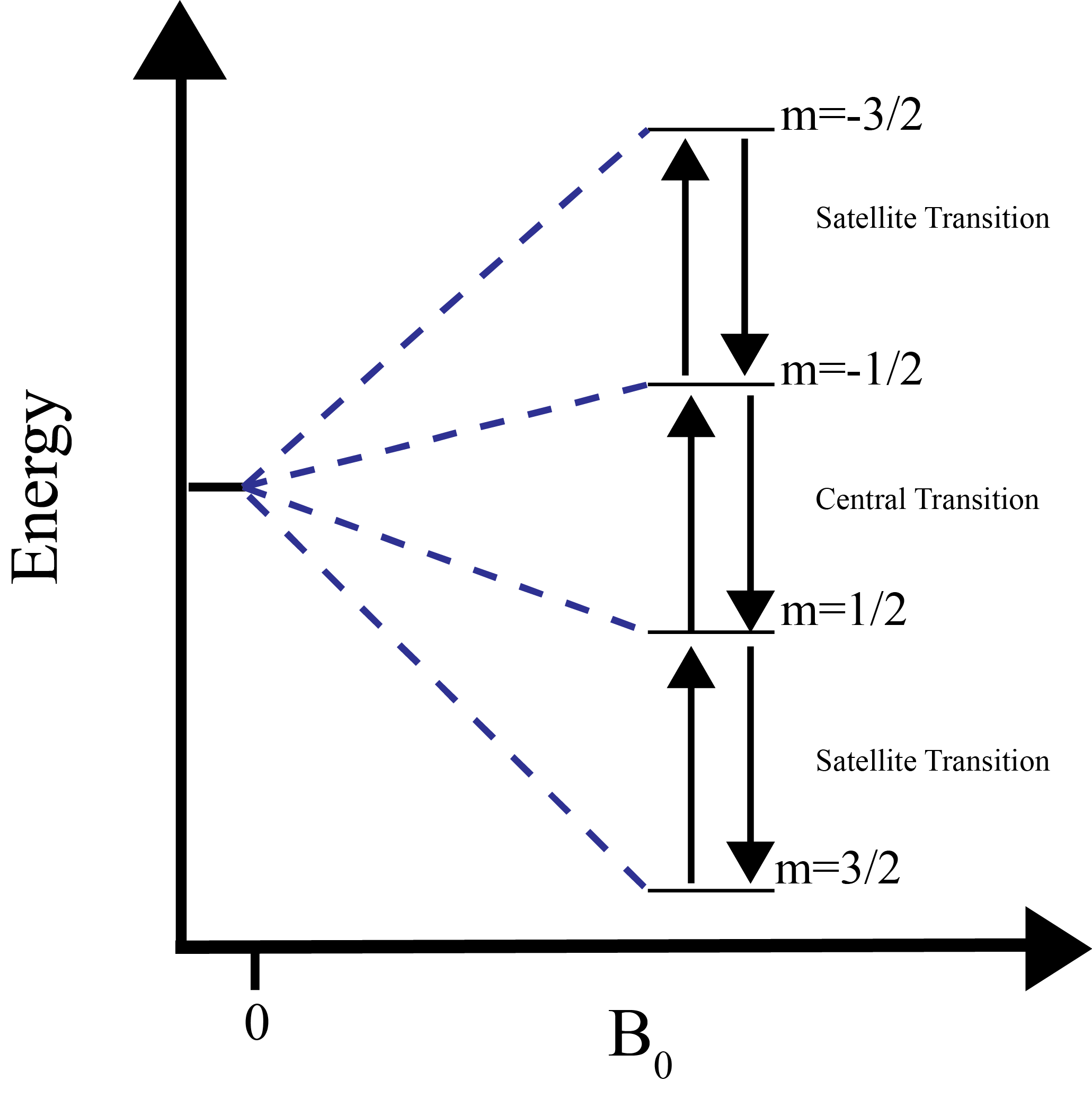 are known as satellite transitions, while the

During the NMR experiment several things happen to the nucleus, the bulk magnetization is rotated from the z axis into the xy plane and then allowed to relax back along the z-axis. A full theoretical explanation for a single atom was developed by Bloch into a set of equations known as the Bloch equations. From the NMR experiment chosen a variety of information can be gleaned by studying different interactions.