This module was created to better your understanding of quarks and other sub-nucleon particles. Both of these topics fall into the study of particle physics, which is the study of elementary particles that are too small to study directly.

Particle physics follows what is known as the Standard Model. This model includes the most elementary particles, which can combined to form composite particles. All known matter consist of fundamental particles, fermions and bosons, which are not known to have any substructure. Fermions are the most basic building blocks of the universe. The list of fermions contains six quarks and six leptons. The six quarks are: up (u), down (d), charm (c), strange (s), top (t), and bottom (b). The six leptons are: electron (e-), electron neutrino (νe), muon (μ−), muon neutrino (νμ), tauon (τ−), and tauon neutrino (ντ). Quarks and leptons are categorized together, forming six families and three generations. The generations are labeled to show differences in mass of the particles, organized so that the higher the generation, the higher the mass (i.e. third generation particles have greater mass than the first and second generation). Most atoms in the universe are made up of first generation particles. The other particles are only seen in extremely high energy conditions. All 12 fermions have antiparticles, which are identical in characteristics and mass to their corresponding fermion, but have an opposite electric charge. Bosons are what allow these fermions to interact with each other from a distance. Bosons are the carrier particles of all the forces that exist.

The six different types of quarks are known as flavors. These flavors combine in certain patterns to form many common particles. Each quark has an electrical charge and a spin. The u, c, and t quarks all have charges of +2/3 whereas the d, s, and b quarks all have -1/3 charges. Quarks are classified as spin-1/2 particles, meaning that their spin is either positive or negative 1/2. The heavier quarks (generation II and III) are unstable, therefor they rapidly become u and d quarks through the process of particle decay. Particle decay is the transformation from higher to lower mass states, either by breaking into more particles or by taking the form of energy. This gives us that u and d quarks are the most common in the universe, and are also the most stable.

For every quark there is an antiquark, denoted with a bar above the symbol. Each antiquark is identical to its corresponding quark in all characteristics, including its mass and spin, except for charge which is of opposite sign. Antiquarks possess color charges as well, and these colors are antired, antiblue, and antigreen.

Leptons are spin-1/2 particles, and can spin in one of two directions: up or down. Electrons, muons, and tauons have a -1 electromagnetic charge whereas the neutrino's all have no charge. While electrons, muons, and tauons all have noticeable masses, neutrinos are almost massless (and are very hard to find). The masses of each lepton increase as generation increases. The heavier leptons (generation II and III) are not found in ordinary matter, because they decay very rapidly into lighter, more stable leptons. Leptons, unlike quarks, are solitary, and are found alone.

Hadrons are particles that are composed of either two or three quarks and/or antiquarks and are held together by the strong strong nuclear force. Despite being formed by quarks that have fractions as charges, hadrons always have integer charges due to the sum of the fractions. The color charge of hadrons sums up to zero, which results in hadrons being colorless or "white". This is because the quarks each have their specific color charge, and when they interact with one another, the color charges cancel each other out leaving the hadron colorless. The most stable hadrons are protons and neutrons. Hadrons are classified as being either a meson or a baryon. 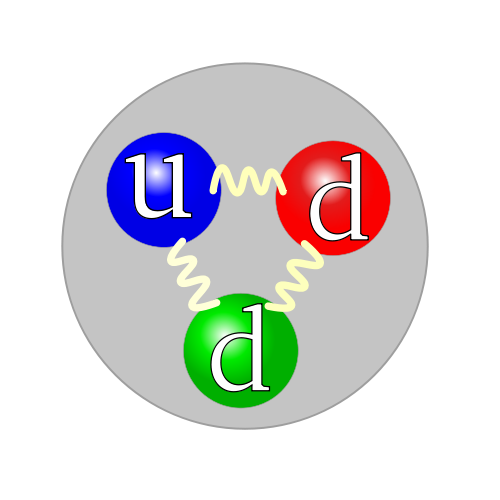 Baryons consist of three quarks. All baryons have antiparticles known as antibaryons in which each quark is replaced with its corresponding antiquark. The most common types of baryons are protons and neutrons, which make up most of the matter you see around. Protons are made up of two up quarks (+2/3 charge) with one down quark (-1/3), giving the proton a total net charge of +1 (4/3 - 1/3 = 1). Neutrons,on the other hand, are made up of two down quarks with one up quark, giving a total net charge of 0, or neutral (-2/3 + 2/3 = 0). There are four fundamental forces, which are each responsible for how particles interact with one another and all of the forces that we see around us. Any force you can think of is due to one of these fundamental forces.

There are four confirmed bosons, which are force carrier particles for the fundamental forces. Bosons allow particles to interact with other particles, without ever touching. Think of magnets: even when not touching the magnets interact, and can repel or attract one another. Gravity is another good example for bosons: an apple falls to the ground even with nothing between them.

Bosons have integer spin, which is different than the half-integer spins of fermions. All particles fill the space around them with countless numbers of bosons, which exist only briefly and are then replaced. If one or more of these bosons come into contact with the same type of boson but of a different parent particle, they can exchange. This exchanging of bosons is how particles interact, and therefor causes a force on each particle.

Photons (γ) are the force carriers for the electromagnetic force. Photons can have different levels of energy which all together form the electromagnetic spectrum. Photons travel at the speed of light (c), which is about 3×108 meters per second. This boson is massless, allowing for it to have an infinite range of interaction. The photon interacts with quarks, charged leptons, W−, and W+.

W bosons (W−, W+) are force carriers for the weak nuclear force, are electrically charged, and are very massive (almost a hundred times heavier than a proton). Since they are so massive, they are limited to a small range of interaction. The emission of this boson can either raise or lower the electric charge of the parent particle, due to the W boson being electrically charged. This boson interacts with quarks and leptons.

Z bosons (Z) are also force carriers for the weak nuclear force, are neutral, and are very massive (almost a hundred times heavier than a proton). Since they are so massive, they are limited to a small range of interaction. With no electric charge, the emission of a Z boson does not alter the electric charge of the parent particle. This boson interacts with quarks and leptons.

There are several theorized bosons to help describe other events and relationships that occur in the universe. These bosons have not yet been discovered, but are still predicted to exist.

It use to be the belief that protons, neutrons, and electrons were the smallest particles in the universe until the invention of the particle accelerator. Particle accelerators were first invented in the 1930s, and have since transformed into some of the most impressive and groundbreaking machines in the world. Today's most powerful particle accelerator is the Large Hadron Collider (LHC). This is a 27 km circular tunnel in Europe that shoots particles up to more than 99.999999% the speed of light. How do these machines apply to particle physics and elementary particles? The tunnel uses superconducting magnets and huge amounts of energy (as high as 1 trillion electronvolts) to send particles racing around the circular track. They often send electrons in one direction and either hydrogen nuclei, hadrons, or entire atoms in the opposite direction until they collide with each other. These collisions occur inside detectors that are placed at intervals in the tunnel. ▲Fig. 5: Particle accelerator's detector showing a proton colliding with an antiproton (Courtesy of Famargar, used with permission from Wikipedia Commons.)

Name all of the six leptons.

Name all of the six quarks.

Which two quarks are the lightest, most stable, and most common in the universe?

What are the two most common types of mesons?

How many, and what types of quarks are protons made up of?

(True/False) Particle accelerators send all projectiles in the same direction through the tunnel.

Which is not one of the colors in color charges: A) green B) orange C) red D) blue

What hadron is composed of two down quarks, and one up quark?

Which fundamental force is carried by the photon: A) gravitational B) electromagnetic C) weak nuclear force D) strong nuclear force

Which fundamental force is responsible for planetary orbits?

Why can't quarks be alone?

Name two theoretical bosons, and what they are responsible for?

Is it predicted that the Higgs boson interacts with photons?

What fundamental force is responsible for the attraction and repulsion of magnets?

If a new particle is discovered to have an integer spin, would it be categorized as a fermion or boson?

What could be the color charge of the two quarks in a meson for it to remain color neutral?

What could be the color charge of the three quarks in a baryon for it to remain color neutral?