The following mnemonic device will help you establish the approximate energy levels for the molecular orbitals of various organic ring systems.

In 1931, German chemist and physicist Erich Hückel proposed a theory to help determine if a planar ring molecule would have aromatic properties. His rule states that if a cyclic, planar molecule has \(4n+2\) \(π\) electrons, it is considered aromatic. This rule would come to be known as Hückel's Rule.

Perhaps the toughest part of Hückel's Rule is figuring out which electrons in the compound are actually π electrons. Once this is figured out, the rule is quite straightforward. Pi electrons lie in the p orbitals and sp2 hybridized atoms have 1 of these p orbitals each. When looking at a C=C double bond we know that there is one sigma bond and one pi bond. The pi bond is formed by the overlap of 1 p orbital from each carbon in the double bond. Each p orbital contains one electron so when the two p orbitals overlap the two electrons become a pi bond and are thus called pi electrons. Because aromaticity deals directly with double bonds and conjugation it is simpler to just count the number pi electrons in a compound. Each double bond (π bond) always contributes 2 π electrons. Benzene has 3 double bonds, so it has 6 π electrons. 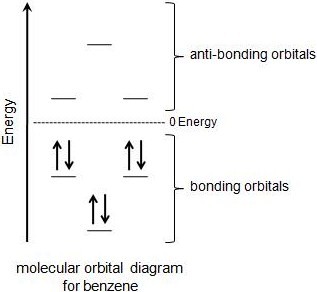 With Hückel's theory we can assume that if a molecule meets the other criteria for aromaticity and also has 2, 6, 10, 14, 18 ect. pi electrons it will most likely be aromatic.

More than 100 years ago, chemists recognized the possible existence of other conjugated cyclic polyalkenes, which at least superficially would be expected to have properties like benzene. The most interesting of these are cyclobutadiene, whose shape and alignment of p orbitals suggested it should have substantial electron-delocalization energies.

However, cyclobutadiene was found to be an extremely unstable molecules. In fact, cyclobutadiene is even more reactive than most alkenes. The synthesis of cyclobutadiene eluded chemists for almost 100 years. As more work was done, it became increasingly clear that the molecule, when formed in reactions, was immediately converted to something else. Finally, cyclobutadiene was captured in an essentially rigid matrix of argon at 8K. On warming to even 35K , it dimerizes through a Diels Alder reaction to yield a tricyclicdiene.

Due to the square ring, cyclobutadiene was expected to have some degree of destabilization associated with ring strain. However, estimations of the strain energies, though substantial, did not account for cyclobutadiene's high degree of instability. Also, why was it not being stabilized through cyclic conjugation in the same way as benzene. The answer can be seen in the molecular orbitals. 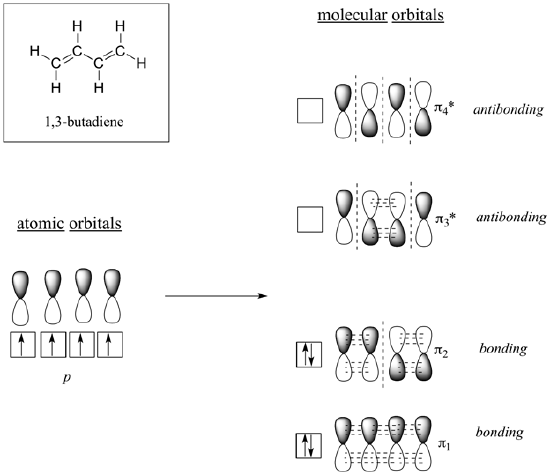 Just like 4n + 2 rule with aromaticity, compounds which are flat, cyclic, have a p orbital at every member of the ring, and 4n pi electrons should be antiaromatic. Another potentially antiaromatic molecule is 1,3,5,7-cyclooctatetraene.

Cyclooctatetraene was first synthesized in 1911 by a German chemist, R. Willstatter (Nobel Prize 1915), who reported an extraordinary thirteen-step synthesis of cyclooctatetraene from a rare alkaloid called pseudopelletierine isolated from the bark of pomegranate trees. However, during the Second World War, the German chemist W. Reppe found that cyclooctatetraene can be made in reasonable yields by the tetramerization of ethyne under the influence of a nickel cyanide catalyst: To make this determination it is important to first as if the compound has the possibility of cyclic conjugation. This requires that the compound be cyclic and have a p orbital at every atom in the ring. If the compound does not have both of these criteria it cannot be aromatic or antiaromatic and must therefore be nonaromatic. Next the number of pi electrons in the ring is determined to see if it follows the count of aromaticity (4n + 2) or antiaromaticity (4n). Before making the final determination, it is vital to know the actual geometry of the molecule. Despite the number of pi electrons, a compound cannot be aromatic or antiaromatic if its geometry is not planar to allow for p orbital overlap. The specific rule is that if you have an sp2 conjugated system, the lone pair will be involved if it makes the system more stable. In this case, conferring Hückel 4n+2 aromaticity. For furan with two lone pairs on the oxygen atom, if we count electrons from the carbon atoms, we have 4 (one per carbon). So adding two electrons from one of the lone pairs will give 6 = 4(1)+2, so Hückel rule is applicable and furan is aromatic.

b) Not aromatic - not fully conjugated, top C is sp3 hybridized

d) Aromatic - N is using its 1 p orbital for the electrons in the double bond, so its lone pair of electrons are not π electrons, there are 6 π electrons, n=1

i) Not aromatic - not fully conjugated, top C is sp3 hybridized

j) Aromatic - O is using its 1 p orbital for the elections in the double bond, so its lone pair of electrons are not π electrons, there are 6 π electrons, n=1