Sometimes, two compounds can have the same molecular formula but different structures. In transition metal complexes, that can happen if the same ligands are arranged around the metal in different ways.

For example, the complex ion [CoCl2(NH3)4]+ contains two chlorine ligands that can be placed in two different ways around the cobalt. The cobalt in this complex has octahedral geometry. Every ligand in the complex is 90 degrees away from four other ligands, and 180 degrees away from a fifth. If there are two chloride ligands, then they might be found 90 degreed away from each other, or they might be found 180 degrees away from each other. The former case exists, and it is called the cis-isomer; the latter case also exists, and is called the trans-isomer (cis means same, as in same side, as opposed to trans, which means opposite).

In this case, the two compounds have different physical properties, most readily seen in the two different colors of the complexes: one is purple and the other is green. The exact reasons for the colors are subtle; you're not expected to know why one is green and the other is purple at this stage.

Draw structures for the following compounds:

Draw structures of the following complexes: 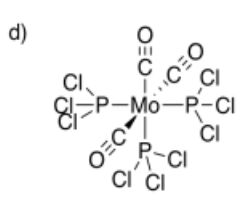 See a more in-depth discussion of coordination complexes in a later course.