A two-step mechanism has been proposed for these electrophilic substitution reactions. In the first, slow or rate-determining, step the electrophile forms a sigma-bond to the benzene ring, generating a positively charged benzenonium intermediate. In the second, fast step, a proton is removed from this intermediate, yielding a substituted benzene ring. The following four-part illustration shows this mechanism for the bromination reaction. Also, an animated diagram may be viewed. Step 1: The electrophile forms a sigma-bond to the benzene ring, generating a positively charged Wheland intermediate

Step 2: A proton is removed from this intermediate via an electrophile elimination reaction, yielding a substituted benzene ring

This mechanism for electrophilic aromatic substitution should be considered in context with other mechanisms involving carbocation intermediates. These include SN1 and E1 reactions of alkyl halides, and Brønsted acid addition reactions of alkenes.

To summarize, when carbocation intermediates are formed one can expect them to react further by one or more of the following modes:

1. The cation may bond to a nucleophile to give a substitution or addition product (coordination).
2. The cation may transfer a proton to a base, giving a double bond product (electrophile elimination).
3. The cation may rearrange to a more stable carbocation, and then react by mode #1 or #2.

SN1 and E1 reactions are respective examples of the first two modes of reaction. The second step of alkene addition reactions proceeds by the first mode, and any of these three reactions may exhibit molecular rearrangement if an initial unstable carbocation is formed. The carbocation intermediate in electrophilic aromatic substitution (the Wheland intermediate) is stabilized by charge delocalization (resonance) so it is not subject to rearrangement. In principle it could react by either mode 1 or 2, but the energetic advantage of reforming an aromatic ring leads to exclusive reaction by mode 2 (i.e., proton loss). 4. Draw the formation of Cl+ from AlCl3 and Cl2 The first step in the nitration of benzene is to activate HNO3 with sulfuric acid to produce a stronger electrophile, the nitronium ion.

Because the nitronium ion is a good electrophile, it is attacked by benzene to produce nitrobenzene.

Further applications of nitration and sulfonation

Because sulfonation is a reversible reaction, it can also be used in further substitution reactions in the form of a directing blocking group because it can be easily removed. The sulfonic group blocks the carbon from being attacked by other substituents and after the reaction is completed it can be removed by reverse sulfonation. Benzenesulfonic acids are also used in the synthesis of detergents, dyes, and sulfa drugs. Benzenesulfonyl chloride is a precursor to sulfonamides, which are used in chemotherapy. 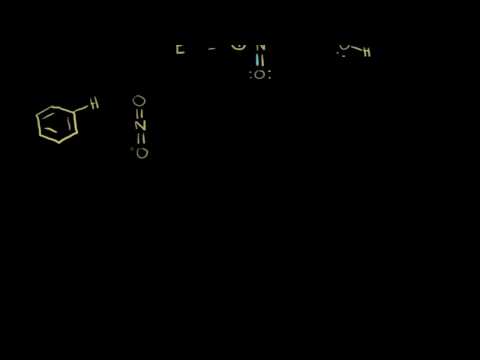 5. Draw an energy diagram for the nitration of benzene. Draw the intermediates, starting materials, and products. Label the transition states. Electrophilic nitration introduces a deactivating, meta-directing substituents on an aromatic ring. The attached nitrogen is in a high oxidation state, and reduction converts the nitro into an electron donating amino group. Reduction is easily achieved either by catalytic hydrogenation (H2 + catalyst), or with reducing metals in acid. Examples of this reduction are shown here. Several alternative methods for reducing nitro groups to amines are known. These include zinc or tin in dilute mineral acid, and sodium sulfide in aqueous ammonia solution. The procedures described above are sufficient for most cases.