The absolute configuration at a chiral center in a molecule is a time-independent and unambiguous symbolic description of the spatial arrangement of ligands (groups) bonded to the chiral center.

The relative configuration is the experimentally determined relationship between two enantiomers even though we may not know the absolute configuration. The sign of rotation of plane-polarized light by an enantiomer is not easily related to its configuration. This is true even for substances with very similar structures. Thus, given lactic acid, \(\ce{CH_3CHOHCO_2H}\), with a specific rotation \(+3.82^\text{o}\), and methyl lactate, \(\ce{CH_3CHOHCO_2CH_3}\), with a specific rotation \(-8.25^\text{o}\), we cannot tell from the rotation alone whether the acid and ester have the same or a different arrangement of groups about the chiral center. Their relative configurations have to be obtained by other means. 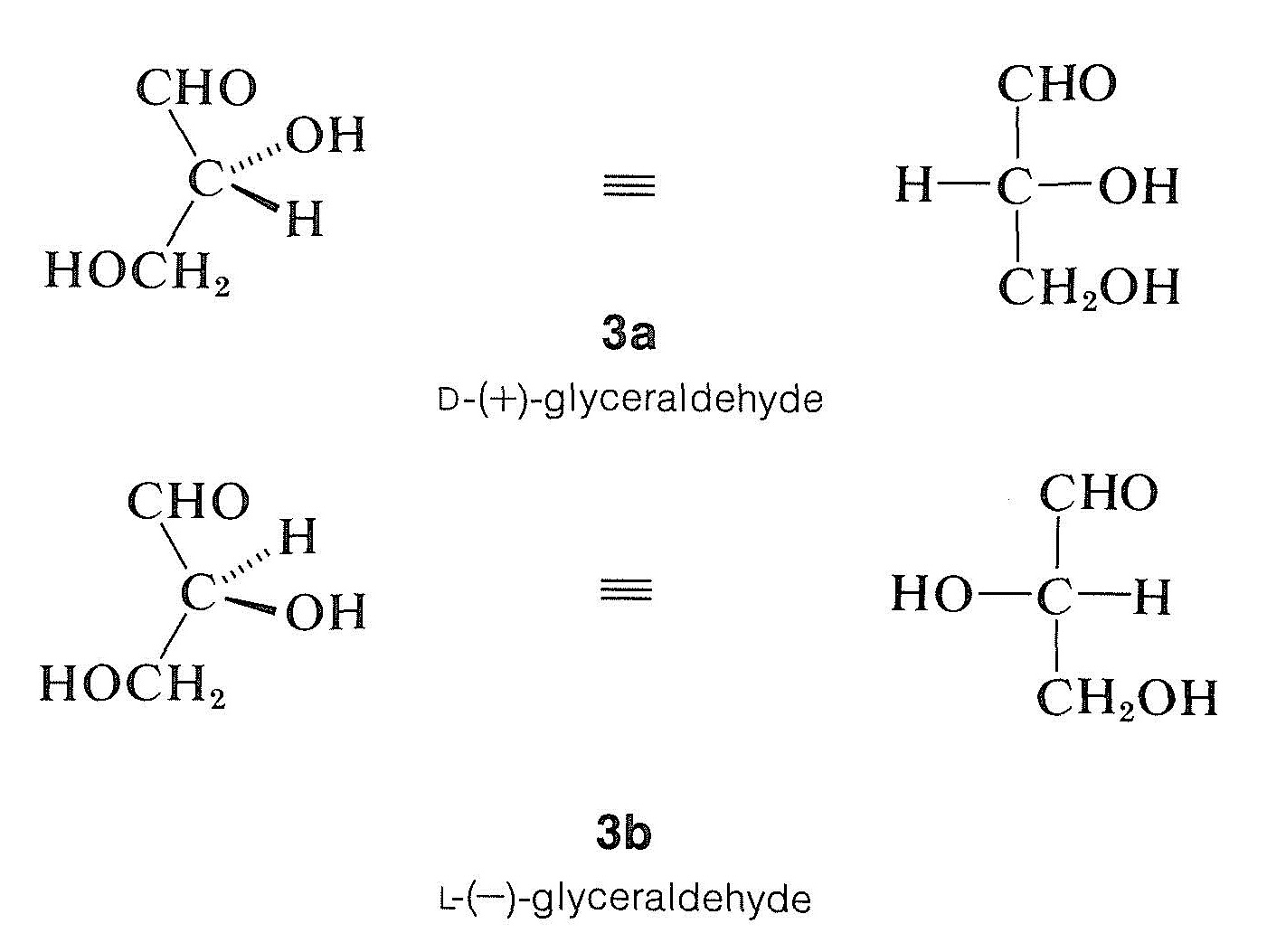 When there are several chiral carbons in a molecule, the configuration at one center usually is related directly or indirectly to glyceraldehyde, and the configurations at the other centers are determined relative to the first. Thus in the aldehyde form of the important sugar, \(\left( + \right)\)-glucose, there are four chiral centers, and so there are \(2^4 = 16\) possible stereoisorners. The projection formula of the isomer that corresponds to the aldehyde form of natural glucose is \(4\). By convention for sugars, the configuration of the highest-numbered chiral carbon is referred to glyceraldehyde to determine the overall configuration of the molecule. For glucose, this atom is \(\ce{C5}\), next to the \(\ce{CH_2OH}\) group, and has the hydroxyl group on the right. Therefore, naturally occurring glucose, which has a \(\left( + \right)\) rotation, belongs to the \(D\) series and is properly called \(D\)-\(\left( + \right)\)-glucose: However, the configurations of \(\alpha\)-amino acids possessing more than one chiral carbon are determined by the lowest-numbered chiral carbon, which is the carbon alpha to the carboxyl group. Thus, even though the natural \(\alpha\)-amino acid, threonine, has exactly the same kind of arrangement of substituents as the natural sugar, threose, threonine by the amino-acid convention belongs to the \(L\)-series, whereas threose by the sugar convention belongs to the \(D\)-series: