The epimer term is useful because in biochemical pathways, compounds with multiple chiral centers are isomerized at one specific center by enzymes known as epimerases. Two examples of epimerase-catalyzed reactions are below. Now, let's extend our analysis to a sugar molecule with three chiral centers. Going through all the possible combinations, we come up with eight total stereoisomers - four pairs of enantiomers.

Let's draw the RRR stereoisomer. Being careful to draw the wedge bonds correctly so that they match the RRR configurations, we get: 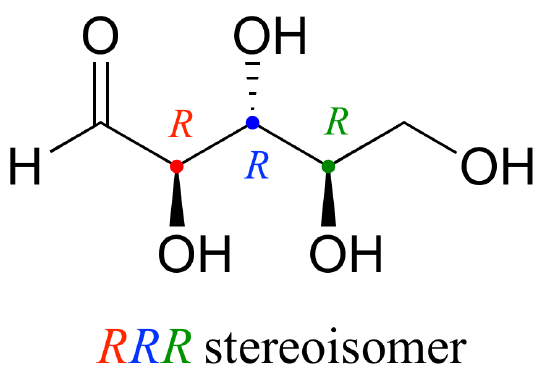 Now, using the above drawing as our model, drawing any other stereoisomer is easy. If we want to draw the enantiomer of RRR, we don't need to try to visualize the mirror image, we just start with the RRR structure and invert the configuration at every chiral center to get SSS. Try making models of RRR and SSS and confirm that they are in fact nonsuperimposable mirror images of each other.

One more definition at this point: diastereomers which differ at only a single chiral center are called epimers. For example, RRR and SRR are epimers: The RRR and SSR stereoisomers shown earlier are diastereomers but not epimers because they differ at two of the three chiral centers.

The sugar below is one of the stereoisomers that we have been discussing. The only problem is, it is drawn with the carbon backbone in a different orientation from what we have seen. Determine the configuration at each chiral center to determine which stereoisomer it is.

Draw the enantiomer of the xylulose-5-phosphate structure in the previous figure.

The structure of the amino acid D-threonine, drawn without stereochemistry, is shown below. D-threonine has the (S) configuration at both of its chiral centers. Draw D-threonine, it's enantiomer, and its two diastereomers.

D-glucose and D-fructose are not stereoisomers, because they have different bonding connectivity: glucose has an aldehyde group, while fructose has a ketone. The two sugars do, however, have the same molecular formula, so by definition they are constitutional isomers.

D-glucose and D-ribose are not isomers of any kind, because they have different molecular formulas.

Exercise 5: Identify the relationship between each pair of structures. Your choices are: not isomers, constitutional isomers, diastereomers but not epimers, epimers, enantiomers, or same molecule Exercise 6: Identify the relationship between each pair of structures. Hint - figure out the configuration of each chiral center.