Nuclei with spin \(I > \dfrac{1}{2}\) comprise more that 2/3 of the NMR active nuclei. These nuclei exhibit a quadrupolar moment which couples to the electric field gradient resulting in extensive peak broadening. This page is dedicated to understanding the origins of the quadrupole moment and the effects on the NMR line shape. It will be developed through a heavy mathematical treatment, however, the illustrations and captions will provide a pictorial representation of the mathematical treatment. If there is an non-symmetric field there will be a force on the quadrupole, i.e., an electric field gradient. We can then define the quadrupole moment as the tendency of the quadrupole to rotate about an axis. Due to the 3D nature of a quadrupole it may be described by a second rank tensor Q where

The quadrupole can then couple to an Electric Field Gradient (EFG) The electric field gradient is denoted a V and is also described by a second rank tensor.

EFGs are generated in solids and liquids by th electrons in the sample.

While calculations of the quadrupole moment for a given nuclei are beyond the scope of this page, the moments for the nuclei have been calculated and a few examples are listed below.

As the spin of a quadrupole nucleus is larger than I=1/2 we develop multiple energy levels (2I+1) and therefore multiple transitions are expected. In half-integer spin systems (e.g. 3/2, 5/2, 7/2) There is still a -1/2 to 1/2 transition knowns as the central transition. The other transitions are known as satellite transitions. A good example is listed below:

While it may be expected that these transitions happen at the same energy levels, we we see in a latter section that this is not the case!

Derivation of the Hamiltonian

If we consider the picture below, We can describe the electrostatic interaction between the electron, which has a non-spherical charge distribution, and the protons of the nucleus through a coulombic interaction such that

where Z is the atomic number, and rp and re are the proton and electron distances.

Most likely, the PAS of the rp and re will not coincide with the lab frame and instead should be expressed by the principle axis system of angles \( \theta_p , \phi_p, \theta_e\) as denoted in the figure above. Converting the reference frame to a frame with its origin at the center of the nucleus we can obtain

where r< is the smaller value between rp or re and r> is the larger value, and Y denotes the spherical harmonics. In the case that the electrons do not penetrate the nucleus, re>rp and

From thie above equation, we will derive the Hamiltonian for the quadrupolar interaction, HQ. In order to do this we first start by showing the symmetry relation

The dot product infers that we can then separate the potential energy equation into two pieces, one for the nuclear energy denoted as Q(l) and one for the electronic energy as k(l). These expressions are given as

The total potential energy is then

In order to fully expand this Hamiltonian, we want to relate Q and K to the molecular parameters. Q will be related to only the operators involving the nuclear spin such that

where T is the spherical tensor. K will be related to the EFG. Lets begin our discussion by expanding Q. Consider the effect of Q on the spins such that

We can then solve for A

Adopting a similar approach for k

We can expand k(2) and find

Substituting the equations in for k and Q we would be able to obtain HQ in an arbitary frame. However, it is much more convient to express HQ in terms of the principle axis system of the EFG. Therefore, we choose the following condition

and we obtain our expression for the HQ as

Then HQ reduces to

Expansion of the Hamiltonian

We can actually re-write this expression to account for the description of the EFG that was given in the Cartesian components if we change spin operators to their Cartesian analogues. This gives the result

and the magnitude of the EFG will then be given as

For the remainder of the discussions we can simplify the constant term to \(\chi\),

This is known as the quadrupole coupling constant and is the accpeted term in the NMR literature. Readers must be wary however as there are several different definitions floating in the literature. The expansion of the Hamiltonian is done using perturbation theory. It has been shown that experimental spectra may be exactly calculated using the first and second perturbations to the Hamiltonian. Using this information, the Hamiltonian may be expanded in terms of polar coordinates and raising and lowering operators. This is done to transform the Hamiltonian from the PAS of the EFG into the laboratory frame

From which we can get first and second order corrections to the energy levels,

The signal exhibited by the quadrupolar nucleus exhibits a very characteristic powder pattern. Looking at the energy levels, it is easy to see there are multiple transitions which can occur. For a spin 1 nucleus, the transitions are from -1 to 0 and 0 to 1. These two transitions manifest themselves as a double horned powder pattern, each horn representative of a transition. The difference in intensities is due to the alignment of the crystallites with respect to the magnetic field. If the crystallite is aligned with the B0 field, then after application of a \(\frac{\pi}{2}\) pulse, it will lie in the x-y plane and consequently contribute fully to the signal. If the crystallite is oriented with some angle relative to the B0 axis and a pulse is applied, it will not process as long and consequently will not be detected for as long and give less of a signal.

from this it is easy to see why two horns are observed. m is either 1 (red) or -1 (blue) which changes the sign of the quadrupolar perturbation to the Larmor frequency.

For nuclei, such as 87Rb, which have multiple transitions, the powder patterns are more complex. Similar to the CSA the lineshape is dependent on the magnitude of \(\chi\) and \(\eta\), as shown in the figure below.

Typically, the satellite transitions are not observed in quadrupolar spectra. The frequency for a symmetric transition, such as -1/2 to 1/2 in quadrupolar nuclei may be represented by the sum of the 0th 2nd and 4th rank Legendre polynomials or mathematically as

The second and fourth rank interactions also have associated frequencies. These are given below

These equations are more useful mathematically and become important in the discussion of pulse sequences of quadrupolar nuclei.

Magnetic Field Effects and the Center of Gravity

The nature of the quadrupolar interaction is heavily influenced by the magnetic field. Below is a figure that shows the field dependence of a Ga resonance in \(\beta\)-Ga2O3. The reader should take note of two things. First, Note how the spectrum narrows as the field is increased. This shows the effect of the central transition is inversely proportional to \(\omega_0\). Second, note the shift in the center of gravity of the peak. As the field increases, the peak shifts progressivley upfield, although the isotropic peak position, denoted by the dotted line is constant. 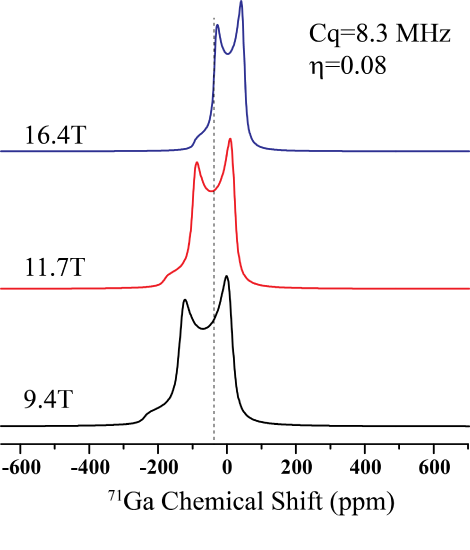 As mentioned earlier, a quadrupolar nucleus is efficiently relaxed by a non-uniform electric field that is a product of the solute molecules interaction with the dipolar solvent. This relaxation is dependent on the interaction of the electric field gradient at the nucleus. When the nucleus is in a molecule that is surrounded by a non-spherical electron density distribution, it creates a gradient. The field gradient, q, describes the electron charge cloud’s deviation from spherical symmetry. The value of q is found to equal zero if the groups around the quadrupolar nucleus have a cubic symmetry, such as in the Td point group. However, if a non-cublic molecule has a threefold or higher symmetry axis, the deviation from spherical symmetry is expressed as a magnitude of q. The two parameters, q, the field gradient, and η, the asymmetric parameter, become necessary only if the molecule's point group's highest symmetry axis is a threefold symmetry or less. Depending on the molecule, certain cancellations can take place leading the asymmetric parameter, η, to equal zero. This is caused by a combination of very specific bond angles and charge distribution in the molecule being analyzed. Ultimately, the effectiveness of the relaxation is dependent on the magnitude of the electric field gradient, q.

A common approach to resolving quadrupolar effects on the spectra of solution state NMR is elevating temperatures while collecting NMR data. The molecular reorientational correlation times are then shorter than the normal time scale, so the homogenous broadening of the line can be reduced. Unfortunately, the temperature required to create this motional tapering is unfeasibly high for many samples that would deem this technique necessary.