The Reactivity of the Nucleophile

Now that we have determined what will make a good leaving group, we will now consider nucleophilicity. That is, the relative strength of the nucleophile. Nucleophilicity depends on many factors, including charge, basicity, solvent, polarizability, and the nature of the substituents. When Moving Across a Row, Nucleophilicity Follows basicity

In the section Nucleophilic Substitution, we assigned a relationship to leaving groups containing C, N, O, and F, showing that the strength of the leaving group follows electronegativity. This is based on the fact that the best leaving groups are those that are weak bases that do not want to share their electrons. The best nucleophiles however, are good bases that want to share their electrons with the electrophilic carbon. The relationship shown below, therefore, is the exact opposite of that shown for the strength of a leaving group.

In general chemistry, we classified solvents as being either polar or nonpolar. Polar solvents can be further subdivided into protic and and aprotic solvents.

Since oxygen and nitrogen are highly electronegative atoms, the O-H and N-H bonds that are present in protic solvents result in a hydrogen that is positively polarized. When protic solvents are used in nucleophilic substitution reactions, the positively polarized hydrogen of the solvent molecule can interact with the negatively charged nucleophile. In solution, molecules or ions that are surrounded by these solvent molecules are said to be solvated. Solvation is the process of attraction and association of solvent molecules with ions of a solute. The solute, in this case, is a negatively charged nucleophile.

The following diagram depicts the interaction that can occur between a protic solvent and a negatively charged nucleophile. The interactions are called hydrogen bonds. A hydrogen bond results from a from a dipole-dipole force between between an electronegative atom, such as a halogen, and a hydrogen atom bonded to nitrogen, oxygen or fluorine. In the case below, we are using an alcohol (ROH) as an example of a protic solvent, but be aware that this interaction can occur with other solvents containing a positively polarized hydrogen atom, such as a molecule of water, or amides of the form RNH2 and R2NH. Why is this important? Solvation weakens the nucleophile; that is, solvation decreases nucleophilicity. This is because the solvent forms a "shell" around the nucleophile, impeding the nucleophile's ability to attack an electrophilic carbon. Furthermore, because the charge on smaller anions is more concentrated, small anions are more tightly solvated than large anions.

The picture below illustrates this concept. Notice how the smaller fluoride anion is represented as being more heavily solvated than the larger iodide anion. This means that the fluoride anion will be a weaker nucleophile than the iodide anion. In fact, it is important to note that fluoride will not function as a nucleophile at all in protic solvents. It is so small that solvation creates a situation whereby fluoride's lone pair of electrons are no longer accessible, meaning it is unable to participate in a nucleophilic substitution reaction. An aprotic solvent is a solvent that lacks a positively polarized hydrogen. The next diagram illustrates several polar aprotic solvents that you should become familiar with.

The consequence of this weakened interaction is two-fold. First, by using an aprotic solvent we can raise the reactivity of the nucleophile. This can sometimes have dramatic effects on the rate at which a nucleophilic substitution reaction can occur. For example, if we consider the reaction between bromoethane and potassium iodide, the reaction occurs 500 times faster in acetone than in methanol.

A second consequence that results from the weak interaction that occurs between aprotic solvents and nucleophiles is that, under some conditions, there can be an inversion of the reactivity order. An inversion would result in nucleophilicity following basicity up and down a column, as shown in the following diagram. When we considered the effects of protic solvents, remember that the iodide anion was the strongest nucleophile. Now, in considering aprotic solvents under some conditions, the fluoride anion is the strongest nucelophile.

What happens as we move up and down a column when considering uncharged nucleophiles? It turns out that, in the case of uncharged nucleophiles, size dictates nucleophilicity. This is because larger elements have bigger, more diffuse, and more polarizable electron clouds. This cloud facilitates the formation of a more effective orbital overlap in the transition state of bimolecular nucleophilic substitution (SN2) reactions, resulting in a transition state that is lower in energy and a nucleophilic substitution that occurs at a faster rate. 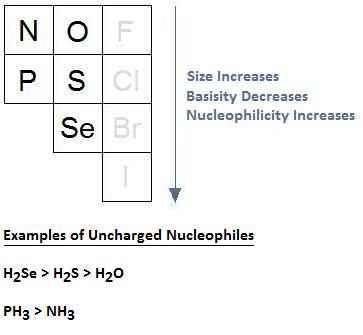 In the section Kinetics of Nucleophilic Substitution Reactions, we learned that the SN2 transition state is very crowded. Recall that there are a total of 5 groups around the electrophilic center.