In oxidation-reduction ("redox") reactions, electrons are transferred from a donor (reducing agent) to an acceptor (oxidizing agent). But how one predict whether, or in which direction, such a reaction will actually go? Presented below is a very simple way of understanding how different redox reactions are related.

Predicting the directions of oxidation-reduction reactions

When discussing acid-base reactions, the picture can be constructed of minimizing free energy for a acid/base base in which protons "Fall" from higher-energy sources (acids) to lower-energy sinks (bases). Similarly, electrons-transfer reactions spontaneously proceed in the direction in which electrons fall (in free energy) from sources (reducing agents) to sinks (oxidizing agents). For example: Will the reaction the following reaction go in the forward or reverse direction as written?

Assume equal effective concentrations of the two ions to avoid favoring one or the other direction. We make can use of an electron free energy diagram, the relevant portion of which is shown here:

Because electrons have a higher energy on Zn than they do on Cu, copper ions will serve as an electron sink to Zn, and the reaction will go to the right: the Zn gets oxidized to Zn2+, and the Cu2+ is reduced to metallic copper.

This is just minimizing free energy of the entire system as a guiding principle in all reactions viewed from a thermodynamics perspective. Since free energy is related to potential of a reaction via recall the relation \( \Delta{G} = -nFE \), the free energy (or Gibbs energy) on the y-axes can be substituted with the negative potential.

Falling through the Activity Series

In this diagram, electron donors (otherwise known as reducing agents or reductants) are shown on the left, and their conjugate oxidants (acceptors) are on the right. The vertical location of each redox couple represents the free energy of an electron in the reduced form of the couple, relative to the free energy of the electron when attached to the hydrogen ion (and thus in H2). 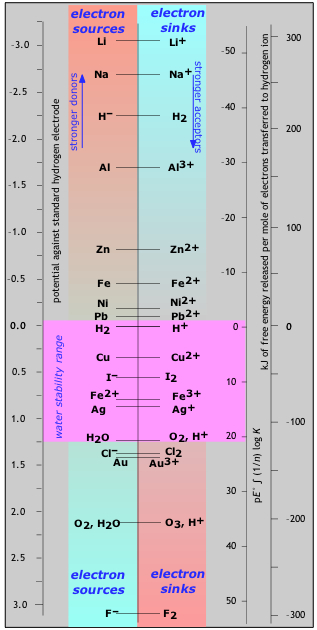 An oxidant can be regarded as a substance possessing vacant electron levels; the "stronger" the oxidizing agent, the lower the energy of the vacancy (the sink). If a reductant is added to a solution containing several oxidants, it will supply electrons to the various empty levels below it, filling them from the lowest up. Note however, that electron transfer reactions can be very slow, so kinetic factors may alter the order in which these steps actually take place.

H2 and H2O. Locate the couples involving these two elements within the vertical section labeled "water stability range" (light blue background). The metals above the H2/H+ couple are known as the active metals because they can all donate electrons to\(H^+\), reducing it to \(H_2\) and leaving the metal cation. In other words, \(H^+\) can serve as an electron sink to these metals, which are therefore attacked by acid. But since some \(H^+\) is always present in water, all of these metals can react with water. Generally, the higher they are, the more readily they react. With zinc and below, reaction with water is so slow at room temperature as to be negligible, but these metals will be attacked by acidic solutions, in which the concentration of \(H^+\) ions is much greater. Those metals that are below hydrogen in this table are not attached by \(H^+\) and are referred to as the noble metals. (Gold, Au, just below chlorine, is the noblest of all.)

The species on the right side below the H2O/O2 couple can all serve as electron sinks to water and will oxidize it to O2. However, this reaction can be extremely slow; only F2, the strongest of all the oxidizing agents (at the very bottom of the table) reacts quickly. It turns out, then, that only those redox pairs situated within the water stability region are thermodynamically stable in aqueous solution; all others will tend to decompose the water.

Three scales of free energy are shown in the figure on the right.

Falling through the Biological Respiratory Chain

This diagram provides an overview of the major redox couples that provide the energy that drives the life process. Most organisms derive their metabolic energy from respiration, a process in which electrons from foodstuffs (nominally glucose), fall to lower-free energy acceptors on the right. In eucaryotic organisms this electron sink is dioxygen. Aerobic respiration is the most efficient of all because the electron falls so far (as it does so, part of the energy is captured by a series of intermediates and used for the synthesis of ATP).

To make the glucose, animals rely on plants, which utilize the energy of sunlight to force electrons from \(O_2\) back up to the top left of the diagram. This, of course, is photosynthesis, which is just respiration driven in reverse. Aerobic respiration is a fairly recent development in the history of life. There still exist a host of primitive organisms (all bacteria) that inhabit anoxic environments and must employ other electron sinks that reside higher on the scale, and thus yield smaller amounts of energy.

Among the more familiar of these sinks:

Not all organisms start with glucose; H2, just below it, can serve as an electron source and was likely an important one during the earliest stages of life, as were most of the sources below it.

If you already know some electrochemistry, you probably know how to use the Nernst Equation to carry out quantitative calculations. Nevertheless, this is still a very helpful picture when you have to deal with multiple redox systems which occur very commonly in environmental chemistry, analytical chemistry, and biochemistry.