Please watch this video, and then read the text below and try the practice problems.
**There is an error at the end of the video - you should find O2 to be paramagnetic (not diamagnetic).

To a great extent, the order of molecular orbitals in energy can be considered to follow from the order of the atomic orbitals from which they are constructed. There are some departures from that rule, sometimes, but that's the simplest place to start. So, in a molecule, the lowest-energy molecular orbitals would be the ones formed from the lowest-energy atomic orbitals, the 1s orbitals. What we see here is a molecular orbital interaction diagram. The middle of the diagram is just the molecular orbital energy diagram. It is analogous to the atomic orbital energy diagram (which goes 1s, 2s, 2p, 3s...). The order of energy so far is σ1s, σ1s*. The sides of the diagram just refer back to where those molecular orbitals came from, with dotted lines to guide you from one place to another. Altogether, the picture says that the 1s orbital on one atom and the 1s orbital on the other atom can combine in two different ways, producing the lower-energy, bonding σ1s and the higher-energy, antibonding σ1s*.

The next lowest set of atomic orbitals is the 2s level. These spherical orbitals would combine very much like 1s orbitals, and we would get a similar diagram, only at a slightly higher energy level. In the context of MO, suppose we do have 2s electrons. That must mean that each atom has two 1s electrons of its own, for a total of four. When those four electrons are filled into the MO diagram from the bottom up, they will occupy both the bonding σ1s and the antibonding σ1s*. The effect of both those combinations being occupied is to cancel out the bonding; those two pairs of electrons remain non-bonding. So we can ignore them and we aren't really missing anything. 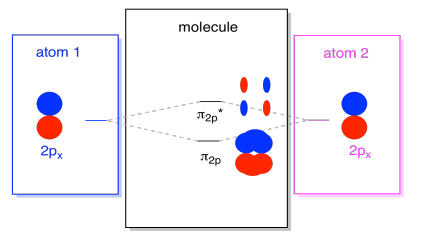 There are actually two of those off-axis p orbitals. In addition to the px set, we would have a py set. If the px set is in the plane of the screen, the py set has one orbital sticking out in front and one hidden behind. Nevertheless, the combinations between the two py orbitals are exactly the same as what we saw between the two px orbitals. They are just rotated into a perpendicular plane with respect to the px combinations. We can put all of those 2p-based orbitals together in one diagram. It's starting to get a little more crowded, but this diagram is just a combination of the pieces we have already seen. Note that the px, py, and pz atomic orbitals all start out at the same energy (we have stacked them here so that you can still see the correlation between the atomic and molecular orbitals). That means that the π2p & π2p* orbitals will be "nested" between the σ2p & σ2p* orbitals. Finally, keeping in mind that the 2p orbitals are higher in energy than the 2s orbitals, we can combine those pictures into one diagram. Again, we have seen these individual pieces before; we are just assembling them now. While we are at it, we can can add in the electrons. How? It's just the total number of valence electrons. For an example, we have used N2. Each nitrogen has five valence electrons, for a total of ten, so we have just filled in ten electrons, starting at the bottom of the molecular orbital energy level diagram. If this were another molecule, such as F2 or O2, we would construct the overall diagram in a similar way, but just use a different number of electrons.

In other words, the energy of the electrons determines the behavior of the molecule. The other energy levels are only possibilities that remain unfulfilled. Think about the picture of dinitrogen.

The remaining orbitals (s p* antibonding and each of the p * antibonding levels) are unoccupied. These are imaginary levels that do not play a role in determining the energy of dinitrogen. In a real molecular orbital calculation, the electrons in these levels would contribute to the overall energy of the molecule.

We get additional information from this picture. For example, we can see the bond order in dinitrogen.

In dinitrogen, the s s bonding s s* antibonding levels cancel each other out. One pair is lower in energy than it was in the atom, but the other is higher. There is no net lowering of energy. These electrons do not contribute to a nitrogen-nitrogen bond. These are non-bonding electron pairs.

Remember, we have made some short-cuts in this picture, and a real molecular orbital calculation could give slightly different results. Nevertheless, it would still reveal a bond order of three as well as two non-bonding electron pairs.

Very often the results of molecular orbital calculations reinforce what we would predict from Lewis structures. If you draw a Lewis structure of dinitrogen, you will also predict a triple nitrogen-nitrogen bond. The chief advantage of molecular orbital theory is that it allows quantitative prediction of energy when we do a real calculation on a computer. In addition, it is important to realize that there is no real reason for the octet rule unless we consider quantum mechanics. Lewis structures are founded on an empirical observation that electrons form pairs and octets, without attempting to explain why. Molecular orbital theory takes some fundamental relationships from physics and applies them to very complicated molecules with very good success. Just by knowing the number of electrons in the molecule, and by knowing approximately where the nuclei are located in the structure, molecular orbital calculations give very useful information about energy. In addition, in more complicated cases than N2, these calculations can even correct our first guess about molecular geometry and where the bonds are located.

A Molecular Orbital Diagram for a diatomic molecule (two atoms) always has the same basic pattern. A Molecular Orbital Diagram for a diatomic molecule (two atoms) varies in the number of electrons. How do you populate the electrons? Construct a qualitative molecular orbital diagram for diboron, B2. Do you think boron-boron bonds could form easily, based on this picture?

Make drawings and notes to summarize the effect of populating antibonding orbitals.

a) Na, because Na has a lower ionization potential (and a lower electronegativity) than Al.