Carbohydrates (CHOs) are among the most complex of biological molecules. If you have ever "counted" your carbs, you know that one biological function of CHOs is to store and provide energy (upon oxidation) to the body for required functions. Instead of concentrating on how CHOs are used for energy production, we will focus predominantly on their structures, which allows them to elicit their main function to provide binding interactions with other biomolecules, either in solution or on cell membranes. Binding, promoted through IMFs, initiates and modulates all biological interactions and processes. First, we will consider the structure of simple and more complex carbohydrates.

Monosaccharides can exist in solution in an equilibrium mixture of a straight chain and cyclic form. An example is shown below for the common sugar D-glucose (Glc). The R/S designation for each stereocenter is included to make it easier to see the orientation of each OH group as the straight chain form cyclizes. In the process of forming the 6-membered ring, a lone pair on the slightly negative OH on C5 forms a bond to the slightly positive C1. This process requires rotation around the various C-C bonds to allow the OH on C5 to approach C1. Since the carbon can only have 4 bonds, bond formation to C1 from the OH on C5 causes the C=O (an aldehyde) to become C-OH (an alcohol). The chair, wedge/dash and "Haworth" projections of the resulting ring are shown. Note that the OH on C1 can point up (beta form, remembered by the phrase butterflies UP) or down (alpha form, remembered by ants DOWN). In the beta form, all ring substituents are in the equatorial position (in the chair form) and in alternating up and down forms in the wedge structure, making the beta form the most stable of all possible 6-membered cyclic forms of 6C sugars. Since there are 4 stereocenters in a 6C sugar aldehyde, there are 24 or 16 possible stereoisomers. Most 6C sugars are D sugars which are defined to have the same R,S designation as D-glyceraldehyde at the last stereocenter in the sugar. Common 6C sugars are D-mannose (Man) and D-galactose (Gal). D-glucose, D-mannose, and D-galactose, all of which have the R configuration at C5, differ in the orientation of the OH groups in the ring structures at C2, C3, and C4. Hence they are diastereomers. The most common 6C sugar containing a ketone (RCOR) at C2 is fructose.

Since sugars are polyhydroxy aldehydes or ketones, can the OH's on C2, C3, and C4 also form a bond to C1 (as illustrated for the C5 OH above) and form rings. They can but the most common form is the 6-membered ring form shown above for D-glucose. How many atoms would be in the rings if the other OH's were involved in ring formation? Why is the 6-membered ring most abundant in nature?

Many derivatives of monosaccharides are found in nature. These include: Longer polysaccharides can be quite simple in structure, but given the diversity of monosaccharides that each have multiple OH groups available to connect two monosaccharides in a polymer, the complexity of polysaccharide structure can be overwhelming to study and understand. Compare this to a protein, a polymer of amino acids that, with the exception of the side chains, each have only two functional groups involved in the linkages between the amino acids.

The simplest polysaccharides consist of only one monosaccharide repeating unit. Three examples of homopolysaccharides, glycogen/starch, cellulose, and chitin are shown below. The monomer in glycogen/starch and cellulose is glucose. The differences between them is the linkage between the glucose monomers. In starch and glycogen, which are energy storage polysaccharides, the linkage is alpha 1-4. In cellulose, the most abundant biomolecule, the linkage is beta 1-4. The beta linkage ensures that all bulky groups on the glucose chairs are in the more stable, equatorial position. This is yet another example of the fact that structure can account for properties and function of molecules. A small covalent change to glucose, the substitution of a CH3CONH- for a OH group on C2 of glucose gives the monosaccharide N-acetylglucosamine. This polymerizes, like cellulose, with a beta 1-4 linkage, to form a new polysaccharide, chitin, with markedly different properties than cellulose. Chitin, is the main component of the exoskeleton of arthropods.

Starch consist of 20-30 % amylose, an unbranched alpha 1-4 polymer of D-glucose, and 70-80% amylopectin, which consists of alpha 1-4 links with alpha 1-6 links every 25-30 glucose residues. Glycogen is similar to amylopectin and also has a protein, glycogenin, at the core of the glycogen particle. Polysaccharides can also be made of a repeating disaccharide unit, instead of repeating monosaccharides in the homopolysaccharides shown above. One example is a glycosoaminoglycan called heparin (an anticoagulant, shown in the figure below) that is composed repeating units of the disaccharide, D-glucuronate-2-sulfate (alpha 1,4) GlcNSulfo-6-sulfate. This disaccharides consists of two glucoses that have been chemically modified. Note the charges on this repeat unit. Another example is the disaccharide repeat in the peptidoglycan (contains both CHO and amino acids) cell walls of bacteria (see figure below). The repeat again consists of chemically modified glucose units. Compare the repeat with the main component of the cytoskeleton, chitin. Nature has chosen variants of this repeat to create a rigid and protective exoskeleton and cell wall for arthropods and bacteria. Here is a figure that provides a better view of the overall cell wall of Gram-positive bacteria. Carbohydrates are covalently attached to many different biomolecules, including lipids, to form glycolipids, and proteins, to form glycoproteins. Glycoproteins and glycolipids are often found in biological membranes, to which they are anchored by nonpolar interactions. A special kind of glycoprotein, a proteoglycan, actually has more carbohydrate mass than protein. What is the function of these carbohydrates? Two are apparent. First, glycosylation of proteins helps protect the protein from degradation by enzyme catalysts within the body. However, a second main function arises from the facilitation of biomolecule recognition. Covalently attached carbohydrates that "decorate" the surface of glycoproteins or glycolipids provide new binding sites for interactions with other biomolecules. Hence glycosylation allows for cell:cell, cell:protein, or protein:protein interactions. Unfortunately, bacteria and viruses often recognize glycosylated molecules on cell membranes, allowing for their import into the cell.

Here are some "cartoon" examples of carbohydrates covalently linked to the amino acid asparagine (Asn) on a glycoprotein. 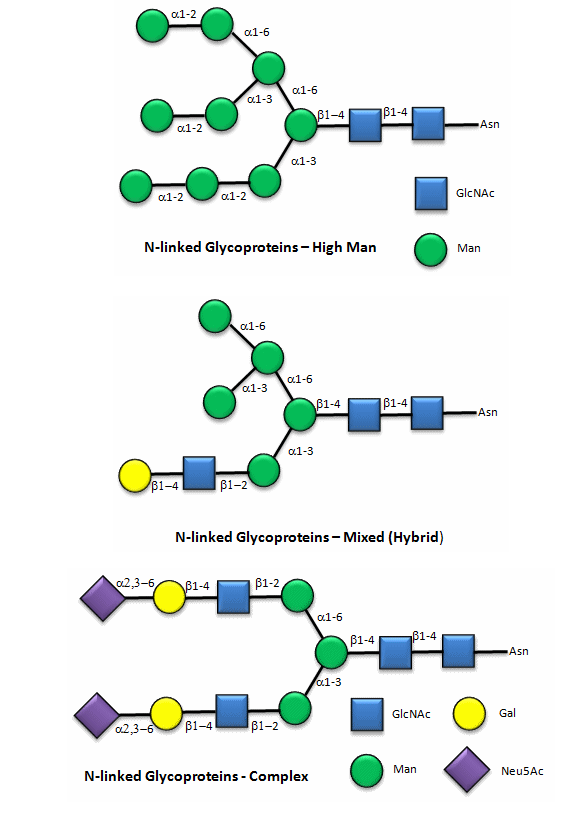 Here are some examples of biomolecular interactions promoted by IMFs involving carbohydrates.

Influenza Virus binding to Cell Surface Glycoproteins with Neu5Ac - A protein on the surface of influenza virus, hemagluttinin, binds to sialic acid (Sia), which is covalently attached to many cell membrane glycoproteins on host cells. The sialic acid is usually connected through an alpha (2,3) or alpha (2,6) link to galactose on N-linked glycoproteins. The subtypes found in avian (and equine) influenza isolates bind preferentially to Sia (alpha 2,3) Gal which predominates in avian GI tract where viruses replicate. Human virus of H1, H2, and H3 subtype (cause of the 1918, 1957, and 1968 pandemics) recognize Sia (alpha 2,6) Gal, the major form in human respiratory tract. The swine influenza HA bind to Sia (alpha 2,6) Gal and some Sia (alpha 2,3)both of which found in swine.

Leukocyte: Cell Wall binding - During inflammation, circulating leukocytes (a type of white blood cell) tether and roll on the walls of blood vessels where they become active. E-, L- and P-selectin proteins are the primary proteins responsible for the tethering and rolling of these leukocytes. P-selectin binds, in part, to a tetrasaccharide, sialyl-Lewisx (SLEX) on the cell surface.. The interaction between P-selectin and the cell mediates the initial binding/rolling of the leukocyte on the vessel wall.

Draw a Haworth and wedge/dash ring structure for the five carbon sugar D-ribose, whose straight chain form is shown below. D-ribose is extremely important in the biological world since its 5-membered ring form is found in RNA. A variant, deoxyribose, in which the OH on C2 is replaced with an H atom, is part of the main chain of DNA.

Humans utilize two kinds of energy storage molecules: glycogen and triacylglycerides. (Review the structure of triacyglycerides from Chapter 8.1). Given intermolecular forces between these different types of molecules and water, predict which one might be biologically advantageous from a weight/mass perspective for an organism who must support this storage mass.

a. a straight chain homopolymer

b. a highly branched chain homopolymer

c. a linear heteropolymer with a repeat unit consisting of two different monomers

Nature uses all of these motifs in the biological world of carbohydrates. There must be advantages of these varying structure. Offer a possible reason for the following types of polysaccharide structures being adopted by nature.

a. straight chain and elongated polymer of glucose which can form fibrils in cellulose

b. a highly branched polymer of glycogen which must be broken down by enzymes to form glucose in times of urgent energy need

The repeating disaccharide motif of heparin (discussed above) is shown below once more.

a. Would you expect this molecule to collapse into a compact spherical structure or have a more open and extended structure? Explain.

b. Heparin is used widely as an anticoagulant. It affects the properties of thrombin, an enzyme that causes the blood to clot. Thrombin is a globular (spherical) protein. For heparin to have a direct effect on thrombin, it must interact with it. What structural features of thrombin might be involved in this interaction? Draw a cartoon model showing the interaction.