A very important concept to keep in mind is that there is an inherent thermodynamic stability associated with conjugation. This stability can be measured experimentally by comparing the heat of hydrogenation of two different dienes. (Hydrogenation is a reaction type that we will learn much more about in chapter 15: essentially, it is the process of adding a hydrogen molecule – two protons and two electrons – to a p bond). When the two conjugated double bonds of 1,3-pentadiene are ‘hydrogenated’ to produce pentane, about 225 kJ is released per mole of pentane formed. Compare that to the approximately 250 kJ/mol released when the two isolated double bonds in 1,4-pentadiene are hydrogenated, also forming pentane.

The formation of synthetic polymers from dienes such as 1,3-butadiene and isoprene is discussed in Section 18.5. Synthetic polymers are large molecules made up of smaller repeating units. You are probably somewhat familiar with a number of these polymers; for example, polyethylene, polypropylene, polystyrene and poly(vinyl chloride). Figure 13.6: Energy diagram for the hydrogenation of 1,3-butadiene (not to scale). The two most frequent ways to synthesize conjugated dienes are dehydration of alcohols and dehydrohalogenation of organohalides, which were introduced in the preparation of alkenes (Section 9.9). The following scheme illustrates some of the routes to preparing a conjugated diene.

Exercise 2.9: Identify all conjugated and isolated double bonds in the structures below. For each conjugated pi system, specify the number of overlapping p orbitals, and how many pi electrons are shared among them.

Exercise 2.10: Identify all isolated and conjugated pi bonds in lycopene, the red-colored compound in tomatoes. How many pi electrons are contained in the conjugated pi system?

1,4-Addition is an electrophilic addition reaction of conjugate dienes. The first step is reversible; the second step is irreversible. Thus, the overall reaction is irreversible, i.e, the system is under kinetic control and the major product is the faster-forming product. The first step, an acid-base reaction, generates the allylic carbocation 4 and the chloride ion.  In the second step, 4 reacts with the chloride ion.  In the two resonance forms (4a, 4b) of 4, 4a has the more stable carbocation center and, therefore, is more stable than 4b. Thus, in the hybrid the partial positive charge on C-2 is more intense than that on C-4.

In the second step, the chloride ion reacts faster with the more electrophilic C-2, leading to 3. Thus, 3 is the faster-forming product and, since the system is under kinetic control, major product. Notice that, at high temperature, 2 and 3 interconvert via 4.

Hence, 2 is the major product. The net reaction from 1 to 4 is the addition of two ligands to atoms 1 and 4 in 1. Hence, the reaction is called 1,4-addition, or conjugate addition, and its product (2) 1,4-adduct. 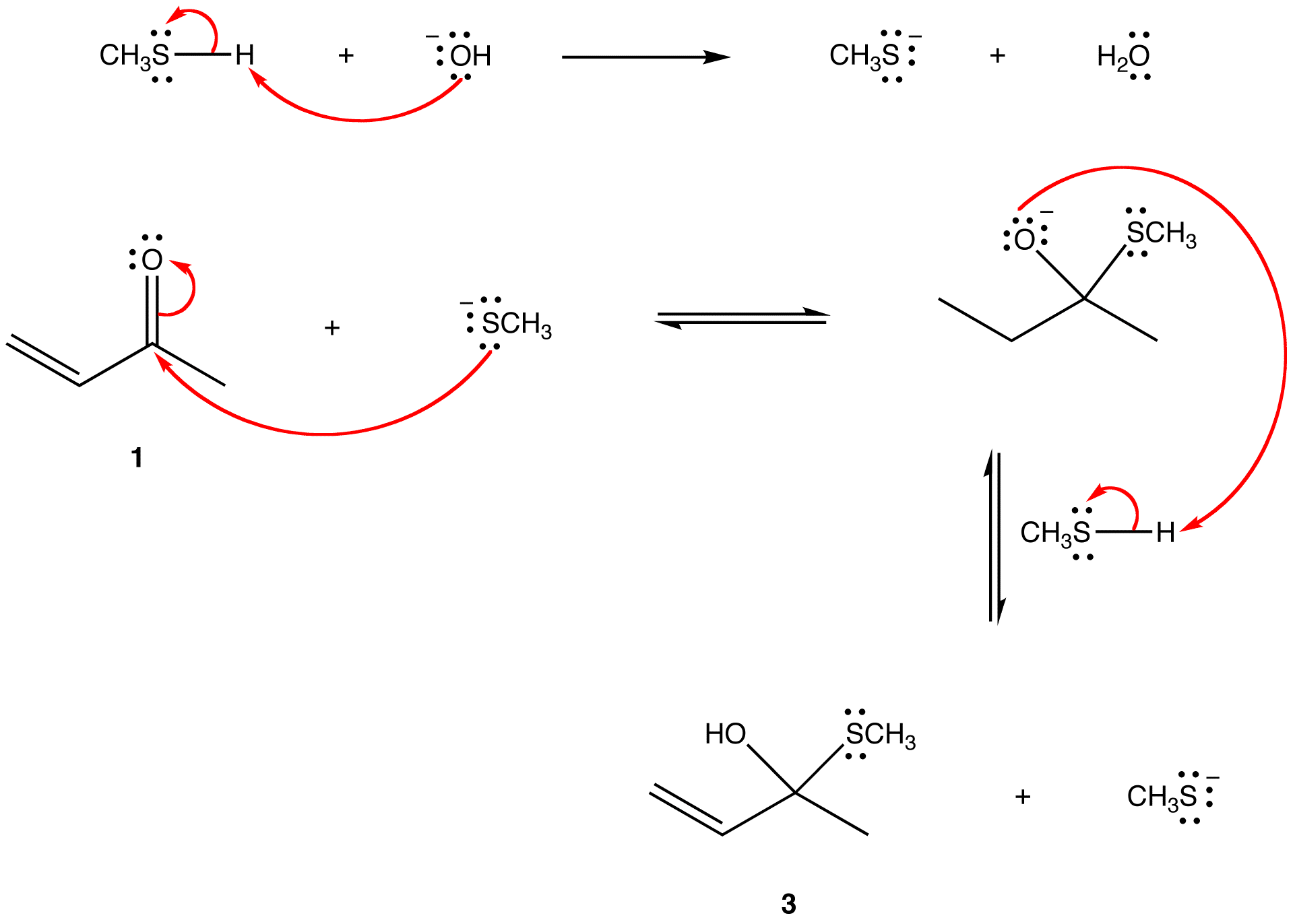 The overall reaction between an α, β–unsaturated compound and a nucleophile is regioselective. Whether the dominant process is 1,4-addition or 1,2-addition depends on several factors, such as the alkene-containing reactant (the α, β–unsaturated compound), nucleophile, solvent, concentration, temperature, reaction time, and catalyst, if any, making if difficult to make a generalization. Most resonance-stabilized carbon nucleophiles, such as enolate ions and enamines overwhelmingly prefer 1,4-addition to 1,2-addition. (See Michael addition) A YouTube element has been excluded from this version of the text. You can view it online here: http://pb.libretexts.org/ochem2walker/?p=58