Not all carbocations have suitable hydrogen atoms (either secondary or tertiary) that are on adjacent carbon atoms available for rearrangement. In this case, the reaction can undergo a different mode of rearrangement known as alkyl shift (or alkyl group migration). Alkyl Shift acts very similarily to that of hydride shift. Instead of the proton (H) that shifts with the nucleophile, we see an alkyl group that shifts with the nucleophile instead. The shifting group carries its electron pair with it to furnish a bond to the neighboring or adjacent carbocation. The shifted alkyl group and the positive charge of the carbocation switch positions on the moleculeReactions of tertiary carbocations react much faster than that of secondary carbocations. We see alkyl shift from a secondary carbocation to tertiary carbocation in SN1 reactions: We observe slight variations and differences between the two reactions. In reaction #1, we see that we have a secondary substrate. This undergoes alkyl shift because it does not have a suitable hydrogen on the adjacent carbon. Once again, the reaction is similar to hydride shift. The only difference is that we shift an alkyl group rather than shift a proton, while still undergoing various intermediate steps to furnish its final product.

With reaction #2, on the other hand, we can say that it undergoes a concerted mechanism. In short, this means that everything happens in one step. This is because primary carbocations cannot be an intermediate and they are relatively difficult processes since they require higher temperatures and longer reaction times. After protonating the alcohol substrate to form the alkyloxonium ion, the water must leave at the same time as the alkyl group shifts from the adjacent carbon to skip the formation of the unstable primary carbocation. 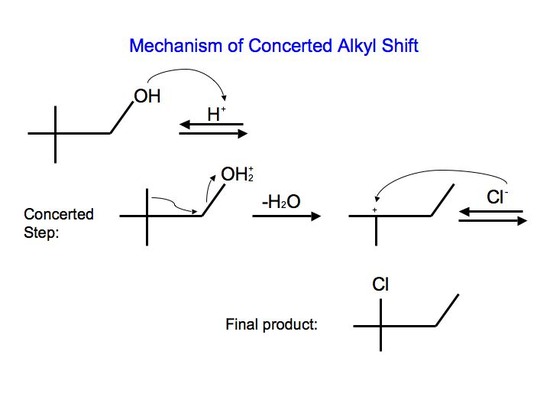 E1 reactions are also affected by alkyl shift. Once again, we can see both minor and major products. However, we see that the more substituted carbons undergo the effects of E1 reactions and furnish a double bond. See practice problem #4 below for an example as the properties and effects of carbocation rearrangements in E1 reactions are similar to that of alkyl shifts.

Typically, hydride shifts can occur at low temperatures. However, by heating the solutionf of a cation, it can easily and readily speed the process of rearrangement. One way to account for a slight barrier is to propose a 1,3-hydride shift interchanging the functionality of two different kinds of methyls. Another possibility is 1,2 hydride shift in which you could yield a secondary carbocation intermediate. Then, a further 1,2 hydride shift would give the more stable rearranged tertiary cation.

More distant hydride shifts have been observed, such as 1,4 and 1,5 hydride shifts, but these arrangements are too fast to undergo secondary cation intermediates.

Carbocation rearrangements happen very readily and often occur in many organic chemistry reactions. Yet, we typically neglect this step. Dr. Sarah Lievens, a Chemistry professor at the University of California, Davis once said carbocation rearrangements can be observed with various analogies to help her students remember this phenomenon. For hydride shifts: "The new friend (nucleophile) just joined a group (the organic molecule). Because he is new, he only made two new friends. However, the popular kid (the hydrogen) glady gave up his friends to the new friend so that he could have even more friends. Therefore, everyone won't be as lonely and we can all be friends." This analogy works for alkyl shifts in conjunction with hydride shift as well. 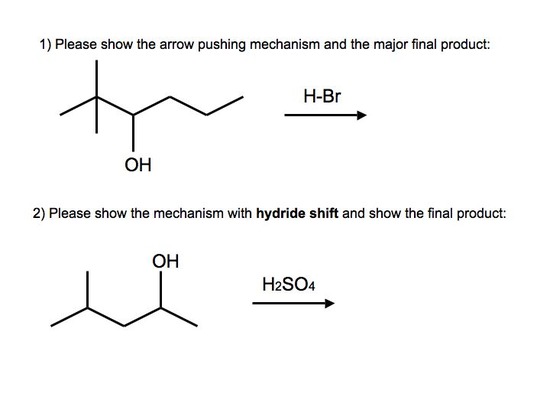