Our most detailed knowledge of atomic and molecular structure has been obtained from spectroscopy-study of the emission, absorption and scattering of electromagnetic radiation accompanying transitions among atomic or molecular energy levels. Whereas atomic spectra involve only electronic transitions, the spectroscopy of molecules is more intricate because vibrational and rotational degrees of freedom come into play as well. Early observations of absorption or emission by molecules were characterized as band spectra-in contrast to the line spectra exhibited by atoms. It is now understood that these bands reflect closely-spaced vibrational and rotational energies augmenting the electronic states of a molecule. With improvements in spectroscopic techniques over the years, it has become possible to resolve individual vibrational and rotational transitions. This has provided a rich source of information on molecular geometry, energetics and dynamics. Molecular spectroscopy has also contributed significantly to analytical chemistry, environmental science, astrophysics, biophysics and biochemistry.

An alternative relation for reduced mass is

reminiscent of the formula for resistance of a parallel circuit. Note that, if \(m_2\rightarrow\infty\), then \(\mu\rightarrow m_1\). The term containing \(\dot{\vec{R}}\) represents the kinetic energy of a single hypothetical particle of mass \(\mu\) located at the center of mass \(\vec{R}\). The remaining terms represent the \(relative\) motion of the two particles. It was the appearance of a \(single\) particle of effective mass \(\mu\) moving in the potential field \(V(r)\).

We can thus write the Schrödinger equation for the relative motion

When we treated the hydrogen atom, it was assumed that the nuclear mass was infinite. In that case we can set \(\mu =m\), the mass of an electron. The Rydberg constant for infinite nuclear mass was calculated to be

If instead, we use the reduced mass of the electron-proton system

This changes the Rydberg constant for hydrogen to

in perfect agreement with experiment.

In 1931, H. C. Urey evaporated four liters of hydrogen down to one milliliter and measured the spectrum of the residue. The result was a set of lines displaced slightly from the hydrogen spectrum. This amounted to the discovery of deuterium, or heavy hydrogen, for which Urey was awarded in 1934 Nobel Prize in Chemistry. Estimating the mass of the deuteron, 2H1, as twice that of the proton, gives

half the mass of the electron. Thus the ionization energy equals 6.80 eV, half that of hydrogen atom. Positron emission tomography (PET) provides a sensitive scanning technique for functioning living tissue, notably the brain. A compound containing a positron-emitting radionuclide, for example, 11C, 13N, 15O or 18F, is injected into the body. The emitted positrons attach to electrons to form short-lived positronium, and the annihilation radiation is monitored.

A diatomic molecule with nuclear masses MA, MB has a reduced mass 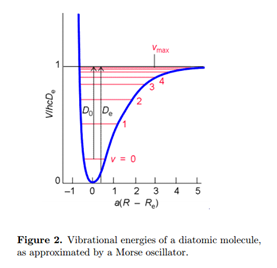 The energy origin can be chosen so V (Re) = 0. At the minimum of the potential, V'(Re) = 0. The best fit to the parabola (17) is obtained with a force constant set equal to

From the solution for the harmonic oscillator, we identify the ground state vibrational energy, with quantum number \(\nu\) = 0

An improved treatment of molecular vibration must account for anharmonicity, deviation from a harmonic oscillator. Anharmonicity results in a finite number of vibrational energy levels and the possibility of dissociation of the molecule at sufficiently high energy. A very successful approximation for the energy of a diatomic molecule is the Morse potential:

Note that V (Re) = 0 at the minimum of the potential well. The Schrö​dinger equation for a Morse oscillator can be solved to give the energy levels

or, expressed in wavenumber units,

Higher vibrational energy levels are spaced closer together, just as in real molecules. Vibrational transitions of diatomic molecules occur in the infrared, roughly in the range of 50-12,000 cm-1. A molecule will absorb or emit radiation only if it has a non-zero dipole moment. Thus HCl is infrared active while H2 and Cl2 are not. A normal mode will be infrared active only if it involves a change in the dipole moment. All three modes of H2O are active. The symmetric stretch of CO2 is inactive because the two C-O bonds, each of which is polar, exactly compensate. Note that the bending mode of CO2 is doubly degenerate. Bending of adjacent bonds in a molecule generally involves less energy than bond stretching, thus bending modes generally have lower wavenumbers than stretching modes.

The rigid rotor model assumes that the internuclear distance R is a constant. This is not a bad approximation since the amplitude of vibration is generally of the order of 1% of R. The Schrö​dinger equation for nuclear motion then involves the three-dimensional angular momentum operator, written \(\hat{J}\) rather than \(\hat{L}\) when it refers to molecular rotation. The solutions to this equation are already known and we can write

The moment of inertia is given by

where RA and RB are the distances from nuclei A and B, respectively, to the center of mass. In wavenumber units, the rotational energy is expressed

Following is a table of spectroscopic constants for the four hydrogen halides:

The force constant can be found from the vibrational constant. Equating the energy quantities \(\hbar\omega=hc\tilde{\nu }\), we find

The internuclear distance R is determined by the rotational constant. By definition,

A nonlinear molecule has three moments of inertia about three principal axes, designated Ia, Ib and Ic. The classical rotational energy can be written

where Ja, Jb, Jc are the components of angular momentum about the principal axes. For a spherical rotor, such as CH4 or SF6, the three moments of inertia are equal to the same value I. The energy simplifies to J2/2I and the quantum-mechanical Hamiltonian is given by

just as for a linear molecule. But the levels of a spherical rotor have degeneraciesof (2J + 1)2 rather than (2J + 1).

Since it is possible to have simultaneous eigenstates of \(\hat J^2\) and one of its components \(\hat J_a\), the energies of a symmetric rotor have the form

The quantum states of molecules are composites of rotational, vibrational and electronic contributions. The energy spacing characteristic of these different degrees of freedom vary over many orders of magnitude, giving rise to very different spectroscopic techniques for studying rotational, vibrational and electronic transitions. Electronic excitations are typically of the order of several electron volts, 1 eV being equivalent to approximately 8000 cm-1 or 100 kJ mol​-1. As we have seen, typical energy differences are of the order of 1000 cm-1 for vibration and 10 cm-1 for rotation. Fig. 6 gives a general idea of the relative magnitudes of these energy contributions. Each electronic state has a vibrational structure, characterized by vibrational quantum numbers v and each vibrational state has a rotational structure, characterized by rotational quantum numbers J and M. When a molecule undergoes a transition to a different electronic state, the electrons rearrange themselves much more rapidly than the nuclei. To a very good approximation, the electronic state can be considered to occur instantaneously, while the nuclear configuration remains fixed. This is known as the Franck-Condon principle. It has the same physical origin as the Born-Oppenheimer approximation, namely the great disparity in the electron and nuclear masses. On a diagram showing the energies of the ground and excited states as functions of internuclear distance, Franck-Condon behavior is characterized by vertical transitions, in which R remains approximately constant as the molecule jumps from one potential curve to the other. Seymour Blinder (Professor Emeritus of Chemistry and Physics at the University of Michigan, Ann Arbor)