Lewis structures, also known as Lewis-dot diagrams, show the bonding relationship between atoms of a molecule and the lone pairs of electrons in the molecule. Lewis structures can also be useful in predicting molecular geometry in conjuntion with hybrid orbitals. A compound may have multiple resonance forms that are also all correct Lewis structures. This section will discuss the rules for writing out Lewis structures correctly.

Writing out Lewis structures can be at times, tricky and somewhat difficult. A compound can have multiple Lewis Structures that contribute to the shape of the overall compound, so one Lewis structure of a compound may not necessarily be exactly what the compound looks like. But before we begin, there are a few things to know. An electron is represnted as a dot. A bond, which is made up of 2 shared electrons, is represented by two dots between the bonded atoms or a line (Kekulé structures lines).Double bonds and triple bonds are represented as two and three lines/(pairs of electrons), respectively. Lone pairs on the outer rims of an atom are represented as two dots. The electrons represented in a lewis stucture are the outer-shell electrons, which are called valence electrons. This is because they are the ones involved in chemical reactions. The examples listed below may or may not be consistent for each step for the sake of showing multiple examples, since all steps apply to every compound. Now we are ready to begin.

Step 2: Add up the valence electrons for each atom in the molecule.

Step 3: (Octet Rule) All covalent bonds are shown by two shared electrons. Place a pair of electrons between two elements that are connected to each other with a single bond. Next, give as many atoms as possible 8 electrons, except for Hydrogen, which has a duet (2-shared electrons). Do this by placing lone electron pairs on the outer atoms until each outer atom fulfills the octet. Place any remaining lone electron pairs on the central atom. Usually, electronegative atoms will have lone pairs on them. The number of electrons placed on the molecule should correspond to the total number of valence electrons of the atoms in the molecule.

Many times, satisfying the octet rule and total number of valence electrons in the molecule with only single bonds is not the case, meaning that there could be less valence electrons than needed to satisfy all octets with only single bond connections. In these situations, double or triple bonds may be needed to obtain octets. Rectify these situations by moving a lone pair of electrons from one atom to the bond between those two atoms. By doing this, one atom that is deficient of an electron pair of its octet can be filled, while having no effect on the other atom’s octet. Each compound is a case-by-case scenario and thus must be thought out carefully to solve the octet/total # of valence electron problems.

****A simple way to find the need for double or triple bonds is by counting the number of electrons to fill all octets, then finding the difference with the total number of valence electrons available in that compound. The difference will show exactly how much electrons that need to be shared to meet the octet (duet for hydrogen) for all atoms.*****

Step 4: Assign Formal Charges (FC) to each atom in the molecule.The formal charge of an atom is pretty much the difference between the number of valence electrons that a neutral atom would have and the number of electrons that is contained on the atom of the Lewis structure. If a charge on an atom is zero, you don't need to put any symbols on that atom. The total of the formal charges on a neutral molecule should be equal to zero. An atom is charged if the total charge of the atom is different from the valence electrons of the free, non-bonded atom.

Charge is distributed over the surroundings and thus called, a formal charge.

Exception 1: Some compounds have odd # of electrons.

-Note: Lithium and hydrogen each have 1 electron to share. Hydrogen meets its duet, but Lithium is still 6 electrons deficient from meeting octet.

Exception 3: After the second row of table of elements, it is not uncommon to see an "expanded valence shell," where atoms have more than 8 valence electrons. The usual explanation is that the bonding involves d-orbital electrons, and the resulting Lewis structures look like that shown below. 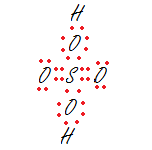 Notice that sulfur atom has 12 electrons around it.

By the rules of drawing Lewis structures, both of these structures have undesirable features. The top structure has expanded octets, whereas the bottom structure contains separated formal charge. However, quantum mechanical electronic structure calculations find little d-orbital participation in the bonding, as would be expected for expanded octet bonding, suggesting that the formal charge separation is preferable to expanding the octets. Therefore, there is generally no reason to draw structures with expanded octets, because they usually don't contribute significantly to the overall structure of the molecule. Even molecules such as XeF6 can be drawn without expanded octets.

Step 1: Build the backbone of ozone.

Step 2: Total up the valence electrons.

There are 20 electrons in the drawing but only 18 available electrons.

So, drag one pair of electrons from one of the exterior oxygens and make a double bond with the central oxygen to the respective side, while maintaining the octet rule. These are the resonance forms of ozone.

Draw out a correct Lewis Structure for the following compounds.

Another simple and general procedure to draw Lewis structures has been proposed by A.B.P. Lever (see reference 5). Before beginning this procedure it is necessary to know the basic geometry of the molecule, i.e. whether it is cyclic or noncyclic, and which atoms are connected to which. Several worked examples for the determination of the Lewis structures of simple and more complicated species using the above described method can be found in the original paper and in Chemistry Net.