The first example of a resolvable compound containing a chiral nitrogen atom was resolved by William Pope and Stanley Peachey in 1899. It had the structure shown below.

Chiral sulfoxides find application in certain drugs such as esomeprazole and armodafinil and are a good example of a stereogenic sulfur center.

Due to their tetrahedral configuration, amines with three different substituents are chiral. The R and S enantiomeric forms of chiral amines cannot be resolved due to their rapid interconversion by a process called pyramidal or nitrogen inversion. During the inversion, the sp3 hybridized amine momentarily rehybridizes to a sp2 hybridized, trigonal planar, transition state where the lone pair electrons occupy a p orbital. The nitrogen then returns to tetrahedral sp3 hybridization causing the lone pair electrons to enter to a hybrid orbital on the opposite side of the nitrogen. During this process substituents invert to form the enantiomer, analogous to the Walden inversion seen in SN2 reactions. The thermodynamic barrier for this inversion (~25 kJ/mol) is low enough to allow rapid inversion at room temperature, leading to a mixture of interconverting R and S configurations. At room temperature a nitrogen atom exists as a racemic mixture of R and S configurations. 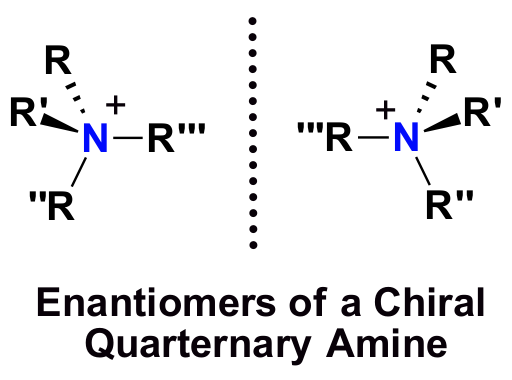 The Enantiomers of a chiral quaternary amine. Trivalent phosphorus compounds called phosphines have a tetrahedral electron-group geometry which makes them structurally analogous to amines. The rate of inversion for phosphines are so much slower than amines that chiral phosphines can be isolated. In this case the set of lone pair electrons are considered a substituent and given the lowest Cahn-Ingold-Prelog priority. The phosphorus center of phosphate ions and organic phosphate esters is also tetrahedral, and thus potentially a stereocenter. In order to investigate the stereochemistry of reactions at the phosphate center, 17O and 18O isotopes of oxygen (the ‘normal’ isotope is 16O) can be incorporated to create chiral phosphate groups. Phosphate triesters are chiral if the all four substituent groups are different (including the carbonyl oxygen).

Trivalent sulfur compounds called sulfonium salts (R3S+) have a tetrahedral electron-group geometry similar to amines and can be chiral if the R groups are all different. In a similar fashion as phosphorus, the inversion rates are slow enough for chiral sulfonium salts to be isolated. Here again the set of lone pair electrons are considered a substituent and given the lowest CIP priority. Sulfonium salts will be discussed in greater detail in Section 18.8.

An excellent example of a chiral sulfonium salt in biological systems is the coenzyme S-adenosylmethionins (SAM). The presence of a sulfonium allows SAM to be a biological methyl group donor in many metabolic pathways. Note that SAM has an S configuration at the sulfur atom.

The sulfur in sulfoxides (R'SOR'') can be chiral if both R groups are different. Here again the inversion rate is slow enough to allow chiral sulfoxides to be isolated. An excellent example is methyl phenyl sulfoxide. Sulfoxides will also be discussed in greater detail in Section 18.8.