The first four of these possibilities are summarized in Scheme \(\sf{\PageIndex{I}}\).

Scheme \(\sf{\PageIndex{I}}\). Common bonding arrangements for hydrogen. The E-H and E---E bonds in the bridging hydride represent sharing of two or more electrons among the three atoms.

In forming H+ and E-H and H- like species the chemical properties of hydrogen are similar to both the alkali metals and the halogens. For this reason it is considered to have an ambiguous position in the periodic table (Figure \(\sf{\PageIndex{1}}\)). Figure \(\sf{\PageIndex{1}}\). Hydrogen has an ambiguous position in the Periodic table. It is usually placed above the alkali metal group although it could also be placed above the halogens.

At room temperature and pressure elemental hydrogen exists in the form of dihydrogen, H2. Dihydrogen is a colorless odorless gas that finds wide industrial application.

In the laboratory H2 may be prepared by the electrolytic or chemical reductions of water involving the half reaction.

Such reductions are commonly carried out on acidic solutions since the potentials required are lower, as may be seen from in the Pourbaix diagram for hydrogen given in Figure \(\sf{\PageIndex{2}}\).

A common method is to add Zn to a solution of hydrochloric acid.

Industrially it is more common to produce hydrogen via steam reforming of methane and other hydrocarbons.

In this process the formally C4- of methane acts as the reductant. The product of steam reforming is a mixtures of CO and H2.. Similar mixtures can also be produced by the anaerobic thermal decomposition of organics and in goal gasification reactions. In all cases they are called syngas (i.e. synthesis gas) since they can be used in other industrial syntheses. Its s CO component is capable of acting as a reductant so additional hydrogen can be produced from it via the water-gas shift reaction.

The "cracking" of hydrocarbons also serves as a source of industrially-produced hydrogen, although the alkenes so produced are perhaps even more important as the source of a majority of commodity organic chemicals.

Much of the hydrogen produced industrially is consumed in the Haber-Bosch synthesis of ammonia. The quantities involved are such that hydrogen production for this purpose has been variously estimated to account for 1-2% of global energy consumption.

Dihydrogen has also been considered for use as a fuel since its combustion is both highly exothermic and green, giving rise only to water.

One of the major obstacles to the implementation of hydrogen as a fuel is that its production by steam reforming and the water-gas shift reaction generates CO & CO2 and costs more energy than is gained from its combustion. For this reason photocatalytic water splitting is considered one of the hold grails of energy research. Figure \(\sf{\PageIndex{3}}\). Distribution of the different types of element hydrides across the periodic table. The figure is adapted from the Periodic Table at https://chem.libretexts.org/Bookshelves/General_Chemistry/Map%3A_Chemistry_-_The_Central_Science_(Brown_et_al.)/02._Atoms%2C_Molecules%2C_and_Ions/2.5%3A_The_Periodic_Table

Ionic hydrides are metal salts of the hydride anion, H-. These are formed by the alkali and all the alkaline earth metals except Be. These are typically prepared by direct reaction of the metal and hydrogen.

As salts of H- ionic hydrides form ionic lattices (the NaCl structure is common for MH, the Rutile and PbI2 for MH2).

For this reason CaH2 is widely used as a drying agent for organic solvents.

The H:- ion in a ionic hydrides may in principle act as a nucleophile. However, in practice this application is limited to the less reactive and consequently more selective hydrides of aluminum and boron, both of which are usually classified as intermediate hydrides on account of the covalent character of their E-H bonds.

Covalent molecular hydrides are formed by the nonmetals, metalloids, and many post-transition metals. The chemical and physical properties they possess varies across the main group and depends somewhat on the row and whether the element hydride is electron deficient, electron rich, or electron precise. Specifically,

Electron deficient hydrides are those of Be and the group 13 elements (B, Al, Ga, In, and Tl) for which the neutral monomeric element hydride (BeH2, BH3, AlH3, GaH3, InH3, and TlH3 does not possess enough electrons to satisfy the octet rule. Thus these hydrides commonly form dimers (B, Al, Ga, In, Tl) or polymers (Be) held together by bridging E-H-E bonds (Scheme \(\sf{\PageIndex{IIA}}\)). These E-H-E bonds are explained as three-center two-electron bonds in valence bond theory Scheme \(\sf{\PageIndex{IIB}}\) but may also be described in terms of molecular orbitals Note \(\sf{\PageIndex{1}}\).

Scheme \(\sf{\PageIndex{II}}\). (A) Bridging E-H-E bonds in Al2H6 and (B) their valence bond description in terms of overlap between the H 1s and Al sp3 orbitals.

Scheme \(\sf{\PageIndex{III}}\). In the absence of extremely strong acids or bases (A) electron-deficient hydrides like BH3 tend to act as Lewis acids in forming dducts with bases like THF while electron rich hydrides as can act as (B) Lewis bases through their lone pairs, as water with Cu2+ when anhydrous CuSO4 is dissolved in water, or (C) as Brønsted acids, as water does when it is used to quench the alkoxide product of a nucleophilic addition reaction. 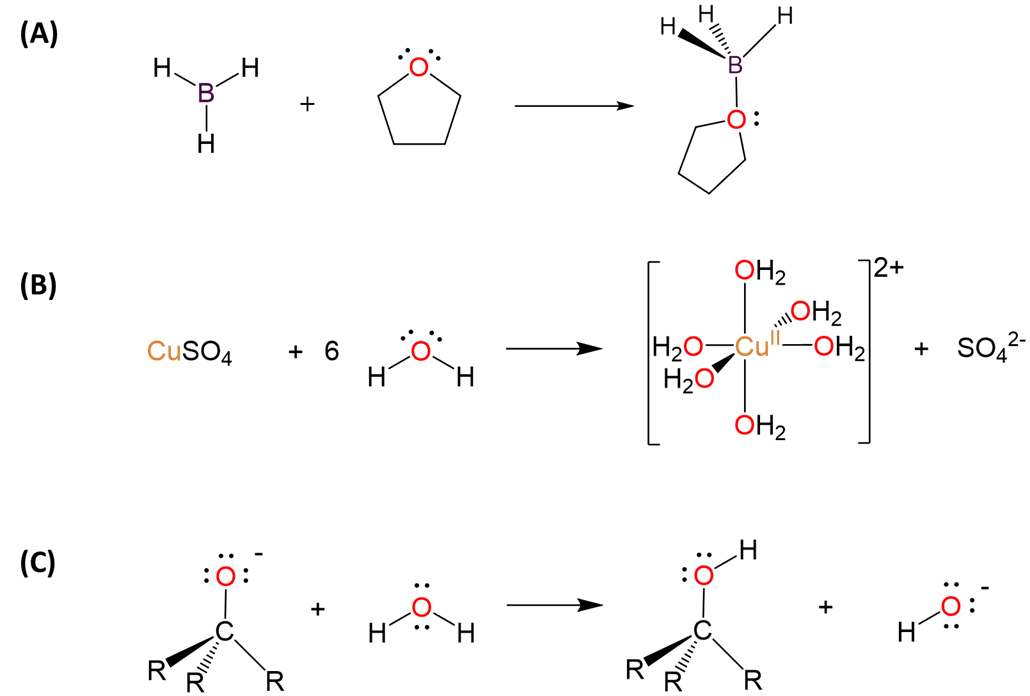 Moreover, all element hydrides - whether electron deficient, precise, or rich - can function as a weak Brønsted acids or hydride donors depending on the polarity of the E-H bond. Hydrides in which hydrogen is bound to an electron rich and electornegative elements tend to act as Brønsted acids while those involving more electropositive elements tend to function as hydride donors, as illustrated in Scheme \(\sf{\PageIndex{IV}}\).

Scheme \(\sf{\PageIndex{IV}}\). (A) The electron rich hydride of chlorine acts as Brønsted acid in forming a pyridinium complex while (B) the relatively electropositive hydride in tetrahydroaluminate is widely used as a hydride donor in organic chemistry, as illustrated by the use of Lithium aluminum hydride to form alcohols from ketones. 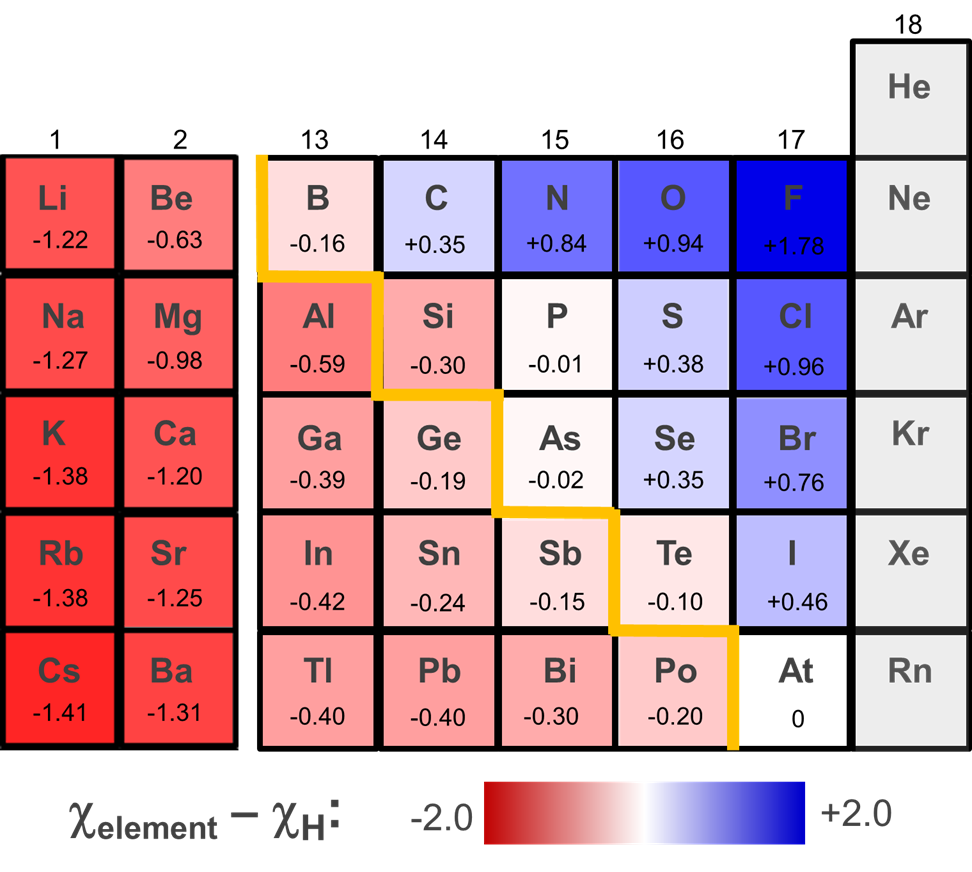 The ability of a given element hydride to function as an acid or hydride donor may be modified by a number of factors. One of these is the solvation energy of the species formed. According to Figure \(\sf{\PageIndex{4}}\), Germane (GeH4) might be expected to function as a hydride donor. However, it can be deprotonated in liquid ammonia, likely because of the large solvation energy of the resulting H+ ion.

Electronic factors that affect the stability of the element hydride's conjugate acid or base forms also play a role. For example, carbon-hydrogen bonds are normally very weakly acidic but can (A) act as strong Brønsted acids when the resulting anion is highly stabilized or (B) This is illustrated by the well-known ability of C-H bonds to function as Brønsted acids, hydride donors, or neither depending on the electron-richness of the carbon center and the stability of the resulting structure (Scheme \(\sf{\PageIndex{V}}\)).

Scheme \(\sf{\PageIndex{V}}\). (A) enolate chemistry such as that used in the formation of acetylacetate (acac) ligands is based on the ability of C-H bonds \(\sf{\alpha}\) to a carbonyl to act as acids and (B) a C-H bond of NADH functions as a hydride donor in biochemical systems. Notice the similarity in reactivity of the C-H hydride in NADH and the Al-H in LiAlH4 shown in in Scheme \(\sf{\PageIndex{IV}}\). Additional aspects of the acid-base chemistry of the element hydrides is described in 6: Acid-Base and Donor-Acceptor Chemistry, as is hydrogen's ability to form hydrogen bonds.

In interstitial or metallic hydrides hydrogen dissolves in a metal to form nonstoichiometrix compounds (solid solutions) of formula MHn. They are called metallic hydrides since they possess the typical metallic properties of luster, hardness, and conductivity and are called interstitial hydrides because the H occupies interstices in a FCC, HCP, or BCC metal lattice, as illustrated schematically in Figure \(\sf{\PageIndex{5}}\).

Figure \(\sf{\PageIndex{5}}\). Schematic illustration of the process of formation of an interstitial hydride showing breakup of dihydrogen and its uptake into the metal lattice. The metal lattice expands 10-20% during this process.1 Taken from https://chem.libretexts.org/Bookshelves/Inorganic_Chemistry/Map%3A_Inorganic_Chemistry_(Housecroft)/10%3A_Hydrogen/10.7%3A_Binary_Hydrides_-_Classification_and_General_Properties/10.7D%3A_Molecular_Hydrides_and_Complexes_Derived_from_them

Note. \(\sf{\PageIndex{1}}\). A Qualitative Molecular Orbital Description of the bonding in Diborane

The B-H-B bonds in diborane may also be explained using a molecular orbital description, as illustrated by the qualitative MO diagram in Figure \(\sf{PageIndex{6}}\). Figure \(\sf{\PageIndex{6}}\). Qualitative MO diagram for diborane. The symmetry adapted bonding and antibonding MOs contributing involved in bridge bonding are shown in violet. The derivation of this diagram is presented in 8.5.1. Properties of the Group 13 Elements and Boron Chemistry.