So far you have learned that during the technique of potentiometry, the potential, or voltage, of an electrochemical cell is measured. The cell consists of both an indicator and reference electrode. Since the potential of the reference electrode is constant, it is the potential developed at the indicator electrode that contains information about the amount of analyte in a sample. During the measurement, there is little to no current flow. An electrochemical cell for making a potentiometric measurement with a membrane electrode (also known as an ion-selective electrode, ISE) is shown in Figure 1. As you can see the main difference between an ISE and the direct indicator electrode is in the ISE's composition. 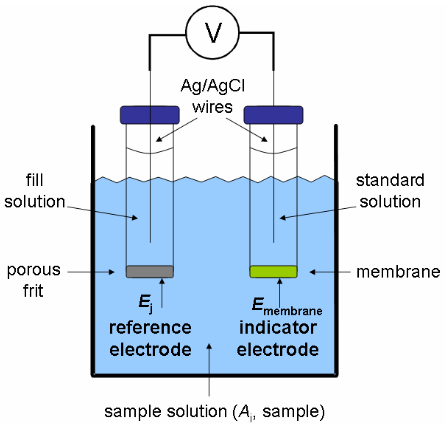 Figure 1. Electrochemical cell for making a potentiometric measurement with an ISE.

As indicated by their name, ion-selective electrodes possess a high degree of selectivity. The selectivity of the ISE is determined by the composition of the membrane. Ideally the membrane allows the uptake of only one specific ion into it. The analyte ion may be a cation or an anion. The three main components of making a measurement at an ISE are an inner reference, or standard, solution and an outer analyte, or sample, solution separated by a thin membrane. These components are shown in Figure 1. Redox processes do not occur at ISEs. The potential developed at the membrane is the result of either an ion exchange process or an ion transport process occurring at each interface between the membrane and solution. The basics of ion exchange and ion transport are reviewed in the next sections.

In the following ion exchange process, a lithium cation displaces a potassium cation from the organic anion, R- :

We can imbed the lipophilic R- in a membrane, as shown in Figure 2, and place it in a solution of Li+

Ion Transport with an Ionophore

Now that you understand the basics of ion exchange, let’s put a membrane, containing an ionophore, between an “unknown” analyte solution and a “known” reference solution (Figure 3). In this example, the analyte is A+. The ionophore is a neutral “carrier” molecule represented by the blue oval. Figure 4 shows the chemical structure of two ionophores. The ionophore cannot diffuse out of the membrane and but can “trap” the analyte ion (A+) at the interface between the solution and membrane. Without the ionophore, the analyte would be unable to partition into the organic membrane. Figure 3. Development of a potential at an ISE.

As with the ion-exchange process, equilibrium is established at both solution-membrane interfaces. The resulting charge separation at each interface leads to a phase-boundary potential. Figure 5. Electrochemical cell for a potentiometric measurement with an ISE.

By now you have learned that the identity of the membrane determines the selectivity of the electrode. In other words the type of membrane used dictates which analyte you can detect. Therefore different electrodes are used for different ions. The membrane should also have low electronic conductivity. The membrane must have low solubility in the analyte solution – we don’t want it to dissolve!!

There are three main types of membranes. The electrodes are classified by the membrane material.

Relationship Between Potential and Concentration

For all of the ISEs described above, the same equations can be used to predict the relationship between potential and analyte activity (A) or concentration.

The potential of each side is related to activity (A) or concentration as described by the Nernst equation, where z is the charge of the ion of interest:

Since Aref and Eo are both constant, Einner (equation 3) is constant. If equations 2 and 3 are plugged into equation 1, they combine to give the following:

Note that the “const” term contains Einner and the E0 from the Eouter term. Also, don’t forget the that –log(1/a) = log(a).

You can see that ISEs should exhibit a Nernstian response, as you previously learned for the direct indicator electrodes.

You have learned that one of the most important analytical characteristics of ISEs is their selectivity; i.e. a specific ion electrode will only respond to the presence of one species. In reality, ion-selective electrodes can experience interferences by responding to the presence of other ions. Although the fluoride electrode comes close, no membrane is 100% specific for only one ion. Equation 4 assumes that all of the electrode response (Emeas) is due to one ion. Let’s call this analyte ion i and its activity Ai (note that the charge is now zi). We will call the interfering ion j with corresponding activity Aj and charge zj. We can account for the lack of 100% specificity by incorporating the activity of j and a selectivity coefficient (kij) into equation 4. This new equation is called the Nikolskii-Eisenman equation:

Continue onto the next page to work on some problems about ISEs.

For further reading on ISEs, refer to references 8 through 13 and the following online resources: