Volcanoes are some of the most fascinating and deadly natural phenomena in the world. Immediately, lava flows and avalanches of poisonous gas and dust come to mind; those with which Vesuvius buried Pompeii and those of Kīlauea, Pinatubo, and St. Helens that are in recent memory. While we tend to consider only the shared danger or visual beauty of lava and smoke plumes, volcanoes around the world differ physically and chemically because of location and source of magma. 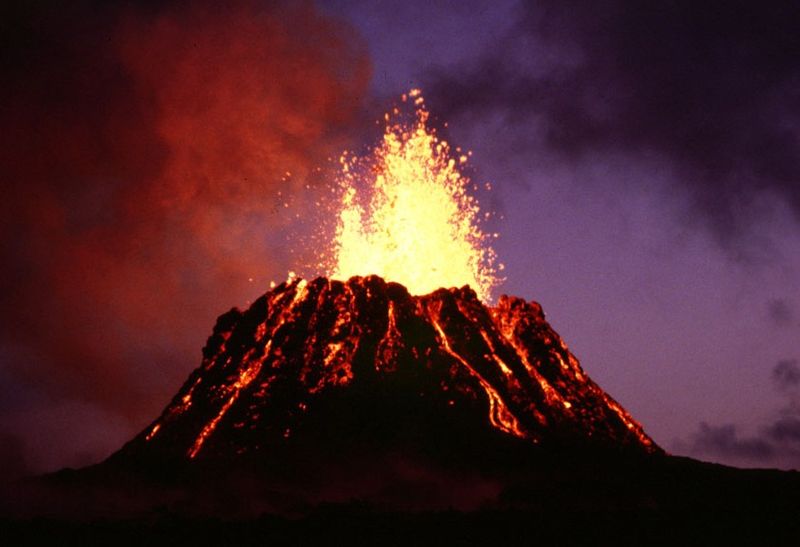 We do not generally think of lava as a chemical, which is correct; lava is essentially a superheated mixture of minerals that can vary in chemical composition. However, it is this difference in elemental composition that leads to general classifications of lava based on the property of viscosity, which can be thought of as how quickly or slowly a fluid moves when disturbed.

The behavior of lava in terms of viscosity seems to be relative to the size of the molecules that comprise it. Though felsic lava contains elements of relatively small size such as sodium and aluminum, these elements form polymers and large crystalline macromolecules such as silica (silicon dioxide), which is known as the minerals feldspar and quartz. Mafic and ultramafic lava, which have progressively lower viscosities, also contain progressively lower quantities of silica and aluminum, which form macromolecules. Instead, they are rich in magnesium oxide, which does not form large molecular structures in liquid state.

Intermolecular forces called London forces explain this trend. London forces are found in all molecules but are notable as the only intermolecular forces present in nonpolar molecules. They are caused by shifting electron density within molecules that cause temporary polizations in a normally nonpolar molecule. This results in one side of the molecule being positively polarized and the other to be negatively polarized; molecules can then temporarily attract each other.

This dependence on the size of the molecule is readily explained by London’s theory. In larger molecules, the valence electrons are on the whole farther from the nuclei. The electron cloud is more diffuse, less tightly held, and hence more easily polarizable than for smaller molecules. Can you identify which lava flow in the above picture is pāhoehoe and which is ʻaʻā? One is in the center of the picture, and the other is towards the right flowing through the gray cooled lava.

Don't let the Hawaiian names throw you off - pāhoehoe lava is given as low viscosity, which means it flows easily and is very liquid in appearance. This is the central flow the glows a deeper red. The flow to the right is noticeably surrounded by more solid material; it is the ʻaʻā flow, which has a high viscosity and so appears more sluggish.

Let's go back to felsic lava and note that a phase change occurs with high intermolecular forces; this type of lava is generally heterogeneous in phase, with a sluggish liquid flow and many solid cinders being carried along. In this case, the strength of the London force has restricted flow so much that the lava is no longer in a liquid phase.

The effect of intermolecular forces on phase can be extended to predict relative melting points and boiling of compounds by considering at their relative sizes. By examining just London forces in nonpolar molecules, can you predict whether a larger molecule should have a higher boiling point than a smaller one?

† Only forms a solid at very high pressures.

The table shows a clear correlation between molecular size, intermolecular forces, and melting and boiling points. Larger molecules contain more electrons, allowing for larger intermolecular forces. These forces tighten the bonds between molecules and makes them harder to separate, or change into a more fluid phase. Thus, larger molecules generally have higher melting and boiling points than smaller ones.