Last lecture addressed three aspects. The first is the introduction of the commutator which is meant to evaluate if two operators commute (a property used extensively in basic algebra courses). Not every pair of operators will commute meaning the order of operations matter. The second aspect is to redefine the Heisenberg Uncertainty Principle now within the context of commutators. Now, we can identify if any two quantum measurements (i.e., eigenvalues of specific operators) will require the Heisenberg Uncertainty Principle to be addressed when simultaneously evaluating them. The third aspect of the lecture was the introduction of vibrations, including how many vibrations a molecule can have (depending on linearity) and the origin of this. The solutions to the harmonic oscillator potential were qualitatively shown (via Java application) with an emphasis of the differences between this model system and the particle in the box (important).

Last lecture laid the groundwork for understanding spectroscopy. We first introduce bra-ket notation as a means to simplify the manipulation of integrals. We introduced a qualitative discussion of IR spectroscopy and then focused on "selection rules" for what vibrations are "IR-active" and can be seen in IR spectra. The two criteria we got were that the vibration requires a changing dipole moment (a static dipole is not needed as discussed for \(CO_2\)) and that \(\Delta v = \pm 1\) for the transition. We were setting the ground work for explaining how to derive the second selection rule using the concept of a transition moment and symmetry. We will pick up that discussion there.

The simplified potential discussed in general chemistry is the potential energy function used in constructing the Hamiltonian. From solving the Schrodinger equations, we get eigenfunctions, eigenvalues (energies) and quantum numbers. Combining these on the potential like we did for the particle in a box give a more detailed (quantum) picture

Zero-point energy is the lowest possible energy that a quantum mechanical system may have,i.e. it is the energy of the system's ground state. The uncertainty principle states that no object can ever have precise values of position and velocity simultaneously.

For the particle in the 1D box of length \(L\), with energies

For the Harmonic Oscillator with energies

Many people have make cookie ideas of tapping into the zero-point energy to drive our economy. This is a silly idea and impossible, since this energy cannot be tapped (see https://van.physics.illinois.edu/qa/...ng.php?id=1256 for more discussion

Infrared (IR) spectroscopy is one of the most common and widely used spectroscopic techniques employed mainly by inorganic and organic chemists due to its usefulness in determining structures of compounds and identifying them. Chemical compounds have different chemical properties due to the presence of different functional groups. A molecule composed of n-atoms has 3n degrees of freedom, six of which are translations and rotations of the molecule itself. This leaves 3N-6 degrees of vibrational freedom (3N-5 if the molecule is linear). Vibrational modes are often given descriptive names, such as stretching, bending, scissoring, rocking and twisting. The four-atom molecule of formaldehyde, the gas phase spectrum of which is shown below, provides an example of these terms.

The spectrum of gas phase formaldehyde, is shown below.

The exact frequency at which a given vibration occurs is determined by the strengths of the bonds involved and the mass of the component atoms.

In the early days of quantum theory, P. A. M. (Paul Adrian Maurice) Dirac created a powerful and concise formalism for it which is now referred to as Dirac notation or bra-ket (bracket \( \langle \, | \, \rangle\)) notation. Bra-ket notation is a standard notation for describing quantum states in the theory of quantum mechanics composed of angle brackets and vertical bars. It can also be used to denote abstract vectors and linear functionals in mathematics.

For the ground state of the well-known particle-in-a-box with length \(L=1\).

However, if we wish to express \( \psi \) in momentum space we would write

How one finds this latter expression will be discussed later.

Spectroscopy is a matter-light interaction. You first need to know the results of the Schrödinger equation of a specific system. This includes both eigenstates (wavefuctions), eigenvalues (energies), and quantum numbers and You need to understand how to couple the eigenstates with electromagnetic radiation. This is done via the transition moment integral

The transition moment integral gives information about the probability of a transition occurring. For IR of a single harmonic oscillator, \(\hat{M}\) can be set to \(x\). A more detailed discussion will be presented later. So the probability for a transition in HO is \[P_{i \rightarrow f} = \langle \psi_i | x | \psi_f \rangle\]

The vibration must change the molecular dipole moment to have a non-zero (electric) transition dipole moment. Molecules CAN have a zero net dipole moment, yet STILL UNDERGO transitions when stimulated by infrared light.

When two electrical charges, of opposite sign and equal magnitude, are separated by a distance, a dipole is established. The size of a dipole is measured by its dipole moment (\(\mu\)). Dipole moment is measured in Debye units, which is equal to the distance between the charges multiplied by the charge (1 Debye equals \(3.34 \times 10^{-30}\; C\, m\)). The dipole moment of a molecule can be calculated by Equation \(\ref{d1}\):

The dipole moment acts in the direction of the vector quantity. An example of a polar molecule is \(\ce{H_2O}\). Because of the lone pair on oxygen, the structure of H2O is bent (predicted by the VSEPR model) that the vectors representing the dipole moment of each bond do not cancel each other out. Hence, water is polar.

Yes.: A vibration does change the dipole moment of the molecule since there is a difference in electronegativity so the distance between the two atoms affects the dipole moment. This is not the symmetric stretch, but the other modes. 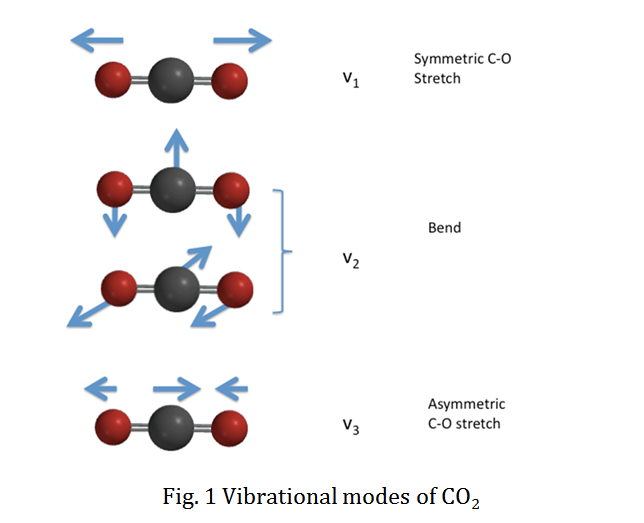 Using the harmonic oscillator and wave equations of quantum mechanics, the energy can be written in terms of the spring constant and reduced mass as

when a molecule absorbs energy, there is a promotion to a higher lying energy state. Let consider the first excited state with energy (via Equation \ref{18} with \(v=1\)):

The energy associated with this transition is