Table 10.5.1 Some Common Acids That Do Not Contain Oxygen

The relationship between the names of the oxoacids and the parent oxoanions is illustrated in Figure 10.5.1 , and some common oxoacids are in Table 10.5.1.

Refer to Table 10.5.1 and Table 10.5.2 to find the name of the acid. If the acid is not listed, use the guidelines given previously.

where R can be an alkyl group, an aryl group, or a hydrogen atom. The simplest example, HCO2H, is formic acid, so called because it is found in the secretions of stinging ants (from the Latin formica, meaning “ant”). Another example is acetic acid (CH3CO2H), which is found in vinegar. Like many acids, carboxylic acids tend to have sharp odors. For example, butyric acid (CH3CH2CH2CO2H), is responsible for the smell of rancid butter, and the characteristic odor of sour milk and vomit is due to lactic acid [CH3CH(OH)CO2H]. Some common carboxylic acids are shown in Figure 10.5.2. 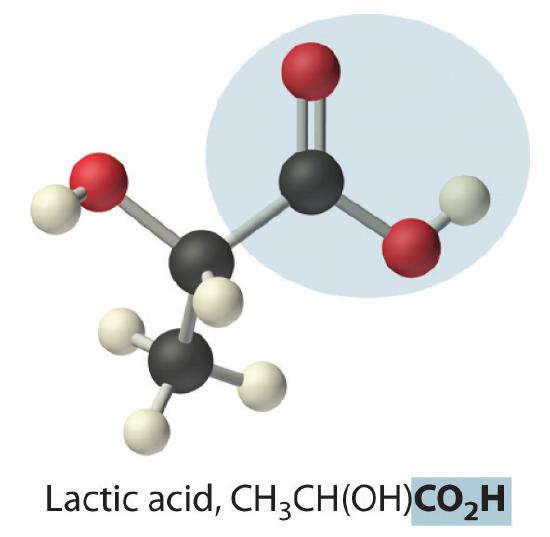 Concentrated aqueous solutions of ammonia (NH3) contain significant amounts of the hydroxide ion, even though the dissolved substance is not primarily ammonium hydroxide (NH4OH) as is often stated on the label. Thus aqueous ammonia solution is also a common base. Replacing a hydrogen atom of NH3 with an alkyl group results in an amineAn organic compound that has the general formula RNH2, where R is an alkyl group. Amines, like ammonia, are bases such as (RNH2). Amines have pungent odors—for example, methylamine (CH3NH2) is one of the compounds responsible for the foul odor associated with spoiled fish. The physiological importance of amines is suggested in the word vitamin, which is derived from the phrase vital amines. The word was coined to describe dietary substances that were effective at preventing scurvy, rickets, and other diseases because these substances were assumed to be amines. Subsequently, some vitamins have indeed been confirmed to be amines.