Since compounds are neutral, it can be difficult to evaluate and compare their overall stability without going through the tedious process of performing bond energy calculations.

For the remaining weak acids (HA), we can determine their relative acidity by comparing the relative electron densities of their conjugate bases (A-).

the lower the electron density, the more stable the conjugate base

There are four main considerations for evaluating electron density.

These considerations are listed in order of importance and are explained individually, but must be looked at collectively.

Identity of the Element

Within a Group (aka down a column) As we move down the periodic table, the electrons are occupying higher energy subshells creating a larger atomic size and volume. As the volume increases, the electron density decreases.

This relationship of atomic size and electron density is illustrated when we compare the relative acidities of methanol, CH3OH, with methanethiol, CH3SH. The lower pKa value of 10.4 for methanethiol indicates that it is a stronger acid than methanol with a pKa value of 15.5. It is important to remember that neither compound is considered an acid. These relationships become useful when trying to deprotonate compounds to increase their chemical reactivity in non-aqueous reaction conditions.

Across a Period (aka across a row) As we move across a period of the main group elements, the valence electrons all occupy orbitals in the same shell. These electrons have comparable energy, so this factor does not help us discern differences relative stability. Differences in electronegativity are now the dominant factor. This trend is shown when comparing the pKa values of methane, ammonia, water, and hydrofluoric acid reflects the relative electonegativities of the C < N < O < F. First, we will focus on individual atoms, and think about trends associated with the position of an element on the periodic table. We’ll use as our first models the simple organic compounds ethane, methylamine, and ethanol, but the concepts apply equally to more complex biomolecules, such as the side chains of alanine, lysine, and serine.

We can see a clear trend in acidity as we move from left to right along the second row of the periodic table from carbon to nitrogen to oxygen. The key to understanding this trend is to consider the hypothetical conjugate base in each case: the more stable (weaker) the conjugate base, the stronger the acid. Look at where the negative charge ends up in each conjugate base. In the ethyl anion, the negative charge is borne by carbon, while in the methylamine anion and ethoxide anion the charges are located on a nitrogen and an oxygen, respectively. Remember the periodic trend in electronegativity (section 2.3A): it also increases as we move from left to right along a row, meaning that oxygen is the most electronegative of the three, and carbon the least. The more electronegative an atom, the better it is able to bear a negative charge. Thus, the ethoxide anion is the most stable (lowest energy, least basic) of the three conjugate bases, and the ethyl anion is the least stable (highest energy, most basic).

More importantly to the study of biological organic chemistry, this trend tells us that thiols are more acidic than alcohols. The pKa of the thiol group on the cysteine side chain, for example, is approximately 8.3, while the pKa for the hydroxyl on the serine side chain is on the order of 17.

Draw the structure of the conjugate base that would form if the compound below were to react with 1 molar equivalent of sodium hydroxide:

Is resonance possible to localize the charge?

In the previous section we focused our attention on periodic trends - the differences in acidity and basicity between groups where the exchangeable proton was bound to different elements. Now, it is time to think about how the structure of different organic groups contributes to their relative acidity or basicity, even when we are talking about the same element acting as the proton donor/acceptor. When evaluating conjugate bases for the presence of the resonance contributors, remember to look for movable electrons as described in section 1.10 of this chapter. Delocalizing electrons over two or more atoms lowers the electron density.

The first model pair we will consider is ethanol and acetic acid, but the conclusions we reach will be equally valid for all alcohol and carboxylic acid groups. Despite the fact that they are both oxygen acids, the pKa values of ethanol and acetic acid are very different. What makes a carboxylic acid so much more acidic than an alcohol? As before, we begin by considering the conjugate bases. The effects of induction on relative acidity can also be seen when comparing acetic acid with trifluoroacetic acid. The difference in acidity does not have to do with resonance delocalization because no additional resonance structures can be drawn for the fluorinated molecule. The fluorine atoms inductively pull some of the electron density away from the carboxylate ion to further delocalize the negative charge of the conjugate base.

The presence of the chlorines clearly increases the acidity of the carboxylic acid group. A chlorine atom is more electronegative than a hydrogen, and thus is able to ‘induce’, or ‘pull’ electron density towards itself, away from the carboxylate group. In helping to further spread out the electron density of the conjugate base, which as we know has a stabilizing effect. In this context, the chlorine substituent is called an electron-withdrawing group. Notice that the pKa-lowering effect of each chlorine atom, while significant, is not as dramatic as the delocalizing resonance effect illustrated by the difference in pKa values between an alcohol and a carboxylic acid. In general, resonance effects are more powerful than inductive effects. The inductive electron-withdrawing effect of the chlorines takes place through covalent bonds, and its influence decreases markedly with distance – thus a chlorine two carbons away from a carboxylic acid group has a decreased effect compared to a chlorine just one carbon away. 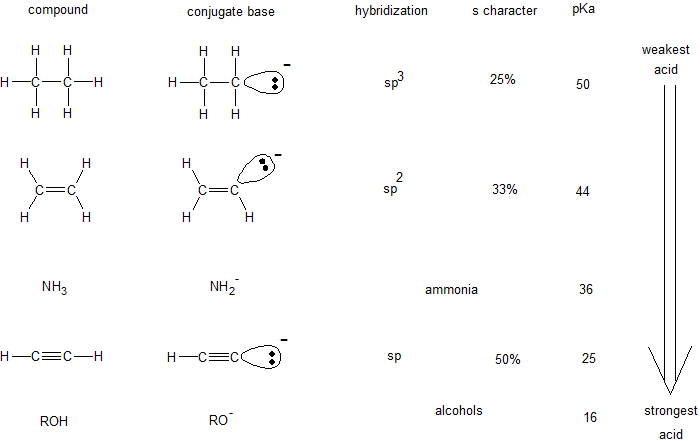 Let's practice by comparing the relative acidity of phenol with acetic acid. 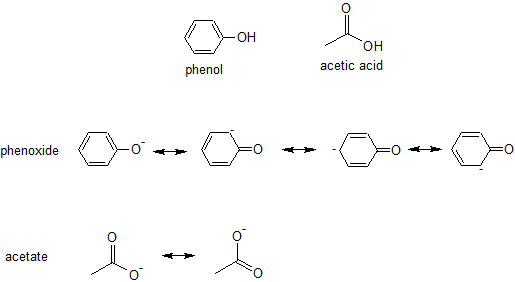 Which compound is the stronger acid - phenol or acetic acid?

To answer this question, we draw all the relevant resonance contributors for each conjugate base, phenoxide and acetate, respectively.