The Henderson-Hasselbach Equation - a Quantitative View

We will use the general reaction for a weak acid to write the Ka expression.

Additional reagents can be added to a reaction solution to change the pH of the reaction conditions beyond the effects of an individual compound.

An application of the Henderson-Hasselbach Equation is the ability to determine the relative acidity of compounds by comparing their pKa values. The stronger an acid, the greater the ionization, the lower the pKa, and the lower the pH the compound will produce in solution. Some selected pKa values for compounds in the study of organic chemistry are shown bellow. Since organic reactions can be performed in non-aqueous environments, the pH can exceed 14 and organic compounds can have pKa values above 16. It is a variation on that line from the Wizard of Oz, "We don't live in water anymore."

It is a very good idea to commit to memory the approximate pKa ranges of the compounds above. A word of caution: when using the pKa table, be absolutely sure that you are considering the correct conjugate acid/base pair. If you are asked to say something about the basicity of ammonia (NH3) compared to that of ethoxide ion (CH3CH2O-), for example, the relevant pKa values to consider are 9.2 (the pKa of ammonium ion) and 16 (the pKa of ethanol). From these numbers, you know that ethoxide is the stronger base. Do not make the mistake of using the pKa value of 38: this is the pKa of ammonia acting as an acid, and tells you how basic the NH2- ion is (very basic!)

While this course begins with single functional groups, we will eventually work with interesting compounds containing multiple functional groups. Recognizing which hydrogens can be ionized as acidic protons and which hydrogens can NOT, is a useful skill. Notice in this example that we need to evaluate the potential acidity at four different locations on the molecule. 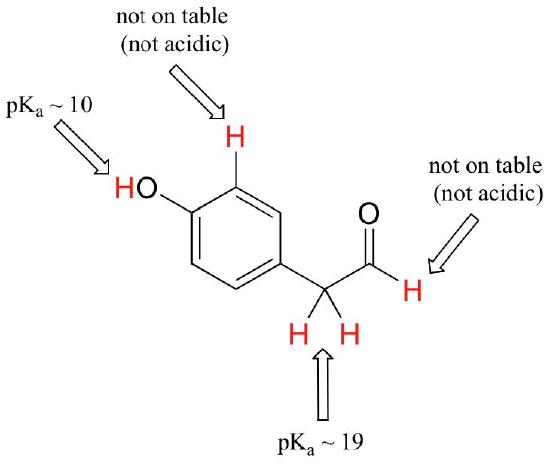 Acidic & Basic Environments - Everything is Relative in Reactivity

It is also important to remember that organic chemistry does NOT have to occur in water so pKa values can be as high as 50.