Because benzene will appear throughout this course, it is important to recognize the stability gained through the resonance delocalization of the six pi electrons throughout the six carbon atoms. Benzene also illustrates one way to recognize resonance - when it is possible to draw two or more equivalent Lewis strucutres. If we were to draw the structure of an aromatic molecule such as 1,2-dimethylbenzene, there are two ways that we could draw the double bonds: In order to make it easier to visualize the difference between two resonance contributors, small, curved arrows are often used. Each of these arrows depicts the ‘movement’ of two pi electrons. A few chapters from now when we begin to study organic reactions - a process in which electron density shifts and covalent bonds between atoms break and form - this ‘curved arrow notation’ will become extremely important in depicting electron movement. In the drawing of resonance contributors, however, this electron ‘movement’ occurs only in our minds, as we try to visualize delocalized pi bonds. Nevertheless, use of the curved arrow notation is an essential skill that you will need to develop in drawing resonance contributors.

Usually, derivatives of benzene (and phenyl groups, when the benzene ring is incorporated into a larger organic structure) are depicted with only one resonance contributor, and it is assumed that the reader understands that resonance hybridization is implied. This is the convention that will be used for the most part in this book. In other books or articles, you may sometimes see benzene or a phenyl group drawn with a circle inside the hexagon, either solid or dashed, as a way of drawing a resonance hybrid.

Curved arrows indicate electron flow. The base of the curved arrow is placed at the source of the electrons that are moving. The head of the arrow is placed at the destination of the electrons. A single barbed arrow represents one electron and a double barb represents two electrons. Electrons move from regions of relative high density to regions of low density or toward electronegative elements. It is important to use accuracy and precision when drawing curved arrows.

It is also important to consciously use the correct type of arrow. There are four primary types of arrows used by chemists to communicate one of the following: completion reaction, equilibrium reaction, electron movement, resonance forms. The three other types of arrows are shown below to build discernment between them.

Resonance is most useful wen it delocalizes charge to stabilize reactive intermediates and products. Recognizing, drawing, and evaluating the relative stability of resonance contributors is essential to understanding organic reaction mechanisms.

Guidelines for drawing and working with resonance contributors

Learning to draw and interpret resonance structures, there are a few basic guidelines to help avoid drawing nonsensical structures. All of these guidellines make perfect sense as long as we remember that resonance contributors are merely a human-invented convention for depicting the delocalization of pi electrons in conjugated systems. When we see two different resonance contributors, we are not seeing a chemical reaction! We are seeing the exact same molecule or ion depicted in two different ways. All resonance contributors must be drawn as proper Lewis structures, with correct formal charges. Never show curved 'electron movement' arrows that would lead to a situation where a second-row element (ie. carbon, nitrogen, or oxygen) has more than eight electrons: this would break the 'octet rule'. Sometimes, however, we will draw resonance contributors in which a carbon atom has only six electrons (ie. a carbocation). In general, all oxygen and nitrogen atoms should have a complete octet of valence electrons.

1. There is ONLY ONE STRUCTURE for each compound or ion. This structure takes its character from the sum of all the contributors, not all resonance structures contribute equally to the sum.

2. Atoms must maintain their same position.

4. All resonance contributors for a molecule or ion must have the same net charge.

5. Recognize which electrons can participate in resonance

a) unshared e- pairs or radicals

a) atoms with a positive (+) charge

b) electronegative atoms that can tolerate a negative charge

a) move pi e- toward positive (+) charge or other pi bonds

Usually, you will see carboxylate groups drawn with one carbon-oxygen double bond and one carbon-oxygen single bond, with a negative formal charge located on the single-bonded oxygen. In actuality, however, the two carbon-oxygen bonds are the same length, and although there is indeed an overall negative formal charge on the group, it is shared equally between the two oxygens. Therefore, the carboxylate can be more accurately depicted by a pair of resonance contributors. Alternatively, a single structure can be used, with a dashed line depicting the resonance-delocalized pi bond and the negative charge located in between the two oxygens. 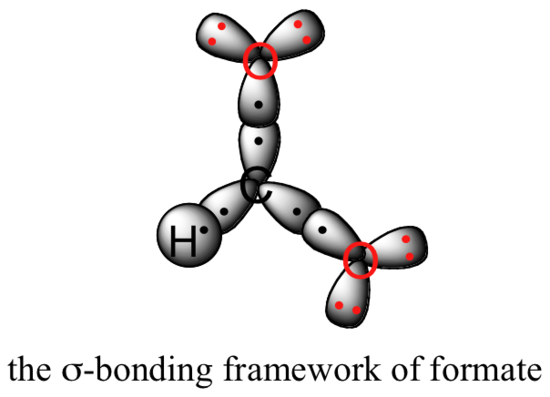