Shorthand notations to represent organic molecules rely on our knowledge of common neutral bonding patterns. Knowing these patterns, we can fill in the missing structural information. Some of these shorthand ways of drawing molecules give us insight into the bond angles and relative positions of atoms in the molecule, while some notations eliminate the carbon and hydrogen atoms and only indicate the heteroatoms (the atoms that are NOT carbon or hydrogen).

There are three primary methods to communicate chemical structure of organic molecules:

Condensed: all atoms are written to communicate structure without drawing any chemical bonds based on the carbon backbone The condensed formula for propanal is CH3CH2CHO. Can you visualize the bond-line structure of propanal? If yes, excellent, If no, the following practice will help.

The Kekule structure for propanal is shown below.

The bond-line structure for propanal is shown below. 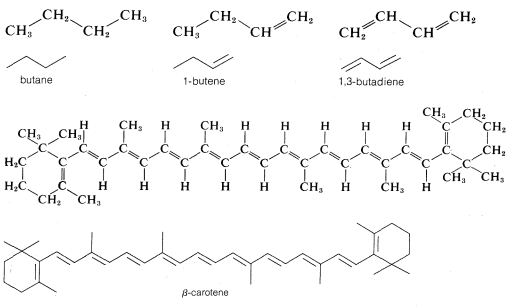