The Lewis structure below (of one of the four nucleoside building blocks that make up DNA) can appear complex and confusing at first glance. Fortunately, common bonding patterns occur that can allow for simplifications when drawing structures. The rules for the simplifies structures rely on the neutral bonding patterns for carbon, orygen, nitrogen, phosphorus, and sulfur primarily. Since organic compounds have a hydrocarbon backbone, the atoms that are NOT carbon and hydrogen are called heteroatoms. 2'-deoxycytidine contains seven heteroatoms: four oxygen atoms land three nitrogen atoms. Heteroatoms are a primary source of chemical reactivity for organic chemistry. 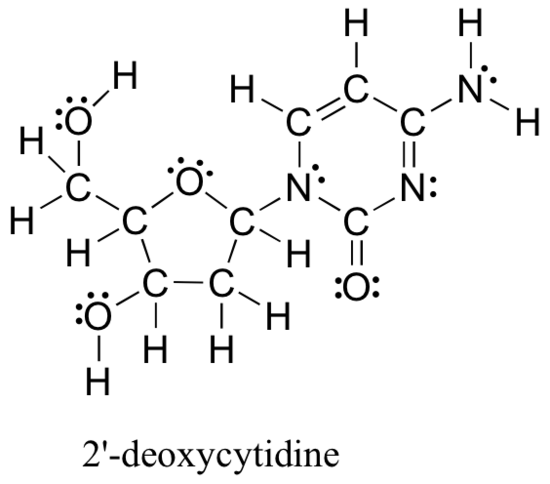 Heteroatoms: atoms in an organic compound that are NOT carbon or hydrogen,

The ability to quickly and efficiently draw large structures and determine formal charges is not terribly hard to come by - all it takes is a few shortcuts and some practice at recognizing common bonding patterns.

<style type="text/css"></style> In carbon dioxide, the carbon atom has double bonds to oxygen on both sides (O=C=O). Later on in this chapter and throughout this book we will see examples of organic ions called ‘carbocations’ and carbanions’, in which a carbon atom bears a positive or negative formal charge, respectively. If a carbon has only three bonds and an unfilled valence shell (in other words, if it does not fulfill the octet rule), it will have a positive formal charge.

If, on the other hand, it has three bonds plus a lone pair of electrons, it will have a formal charge of -1. Another possibility is a carbon with three bonds and a single, unpaired (free radical) electron: in this case, the carbon has a formal charge of zero. (One last possibility is a highly reactive species called a ‘carbene’, in which a carbon has two bonds and one lone pair of electrons, giving it a formal charge of zero. You may encounter carbenes in more advanced chemistry courses, but they will not be discussed any further in this book).

The pattern for hydrogens is easy: hydrogen atoms have only one bond, and no formal charge. The exceptions to this rule are the proton, H+, and the hydride ion, H-, which is a proton plus two electrons. Because we are concentrating in this book on organic chemistry as applied to living things, however, we will not be seeing ‘naked’ protons and hydrides as such, because they are too reactive to be present in that form in aqueous solution. Nonetheless, the idea of a proton will be very important when we discuss acid-base chemistry, and the idea of a hydride ion will become very important much later in the book when we discuss organic oxidation and reduction reactions. As a rule, though, all hydrogen atoms in organic molecules have one bond, and no formal charge.

Two third row elements are commonly found in biological organic molecules: sulfur and phosphorus. Although both of these elements have other bonding patterns that are relevant in laboratory chemistry, in a biological context sulfur almost always follows the same bonding/formal charge pattern as oxygen, while phosphorus is present in the form of phosphate ion (PO43-), where it has five bonds (almost always to oxygen), no lone pairs, and a formal charge of zero. Remember that atoms of elements in the third row and below in the periodic table have 'expanded valence shells' with d orbitals available for bonding, and the the octet rule does not apply.

Finally, the halogens (fluorine, chlorine, bromine, and iodine) are very important in laboratory and medicinal organic chemistry, but less common in naturally occurring organic molecules. Halogens in organic compounds usually are seen with one bond, three lone pairs, and a formal charge of zero. Sometimes, especially in the case of bromine, we will encounter reactive species in which the halogen has two bonds (usually in a three-membered ring), two lone pairs, and a formal charge of +1.