Matter can be identified by its characteristic inertial and gravitational mass and the space that it occupies. Matter is typically commonly found in three different states: solid, liquid, and gas.

A substance is a sample of matter whose physical and chemical properties are the same throughout the sample because the matter has a constant composition. It is common to see substances changing from one state of matter to another. To differentiate the states of matter at least at a particle level, we look at the behavior of the particles within the substance. When substances change state, it is because the spacing between the particles of the substances is changing due to a gain or loss of energy. For example, we all have probably observed that water can exist in three forms with different characteristic ways of behaving: the solid state (ice), liquid state (water), and gaseous state (water vapor and steam). Due to water's prevalence, we use it to exemplify and describe the three different states of matter. As ice is heated and the particles of matter that make up water gain energy, eventually the ice melts in to water that eventually boils and turns into steam.

Before we examine the states of matter, we will consider some ways samples of matter have been classified by those who have studied how matter behaves.

Evidence suggests that substances are made up of smaller particles that are ordinarily moving around. Some of those particles of matter can be split into smaller units using fairly strong heat or electricity into smaller rather uniform bits of matter called atoms. Atoms are the building blocks of elements. Elements are all those substances that have not ever been decomposed or separated into any other substances through chemical reactions, by the application of heat, or by attempting to force an direct electric current through the sample. Atoms in turn have been found to be made up of yet smaller units of matter called electrons, protons, and neutrons.

Elements can be arranged into what is called the periodic table of elements based on observed similarities in chemical and physical properties among the different elements. When atoms of two or more elements come together and bond, a compound is formed. The compound formed can later be broken down into the pure substances that originally reacted to form it.

Compounds such as water are composed of smaller units of bonded atoms called molecules. Molecules of a compound are composed of the same proportion of elements as the compound as a whole since they are the smallest units of that compound. For example, every portion of a sample of water is composed of water molecules. Each water molecule contains two hydrogen atoms and one oxygen atom, and so water as a whole has, in a combined state, twice as many hydrogen atoms as oxygen atoms..

Water can still consist of the same molecules, but its physical properties may change. For instance, water at a temperature below 0° Celsius is ice, whereas water above the temperature of 100° C is a gas, water vapor. When matter changes from one state to another, temperature and pressure may be involved in the process and the density and other physical properties change. The temperature and pressure exerted on a sample of matter determines the resulting form of that the matter takes, whether solid, liquid, or gas.

Since the properties of compounds and elements are uniform, they are classified as substances. When two or more substances are mixed together, the result is called a mixture. Mixtures can be classified into two main categories: homogeneous and heterogeneous. A homogeneous mixture is one in which the composition of its constituents are uniformly mixed throughout. A homogeneous mixture in which on substance, the solute, dissolves completely in another substance, the solvent, may also be called a solution. Usually the solvent is a liquid, however the solute can be either a liquid, solid, or a gas. In a homogeneous solution, the particles of solute are spread evenly among the solvent particles and the extremely small particles of solute cannot be separated from the solvent by filtration through filter paper because the spaces between paper fibers are much greater than the size of the solute and solvent particles. Other examples of homogeneous mixtures include sugar water, which is the mixture of sucrose and water, and gasoline, which is a mixture of dozens of compounds. 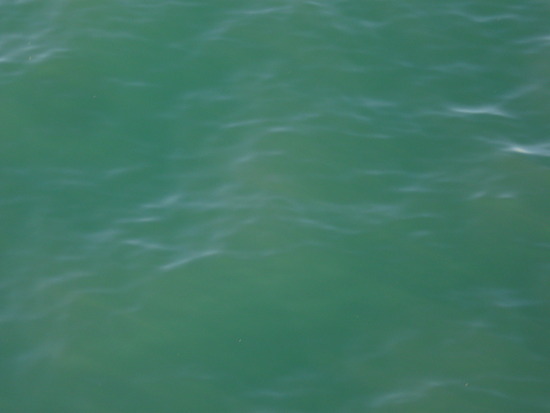 Homogeneous Mixtures: Filtered seawater is solution of the compounds of water, salt (sodium chloride), and other compounds. Mixtures that fall between a solution and a heterogeneous mixture are called colloidal suspensions (or just colloids). A mixture is considered colloidal if it typically does not spontaneously separate or settle out as time passes and cannot be completely separated by filtering through a typical filter paper. It turns out that a mixture is colloidal in its behavior if one or more of its dimensions of length, width, or thickness is in the range of 1-1000 nm. A colloidal mixture can also be recognized by shining a beam of light through the mixture. If the mixture is colloidal, the beam of light will be partially scattered by the suspended nanometer sized particles and can be observed by the viewer. This is known as the Tyndall effect. In the case of the Tyndall effect, some of the light is scattered since the wavelengths of light in the visible range, about 400 nm to 700 nm, are encountering suspended colloidal sized particles of about the same size. In contrast, if the beam of light were passed through a solution, the observer standing at right angles to the direction of the beam would see no light being reflected from either the solute or solvent formula units that make up the solution because the particles of solute and solvent are so much smaller than the wavelength of the visible light being directed through the solution. Colloidal Mixtures: Colloidal mixture have components that tend not to settle out. Milk is a colloid of liquid butterfat globules suspended in water

Most substances are naturally found as mixtures, therefore it is up to the chemist to separate them into their natural components. One way to remove a substance is through the physical property of magnetism. For example, separating a mixture of iron and sulfur could be achieved because pieces of iron would be attracted to a magnet placed into the mixture, removing the iron from the remaining sulfur. Filtration is another way to separate mixtures. Through this process, a solid is separated from a liquid by passing through a fine pored barrier such as filter paper. Sand and water can be separated through this process, in which the sand would be trapped behind the filter paper and the water would strain through. Another example of filtration would be separating coffee grounds from the liquid coffee through filter paper. Distillation is another technique to separate mixtures. By boiling a solution of a non-volatile solid disolved in a liquid in a flask, vapor from the lower boiling point solvent can be driven off from the solution by heat, be condensed back into the liquid phase as it comes in contact with cooler surfaces, and be collected in another container. Thus a solution such as this may be separated into its original components, with the solvent collected in a separate flask and the solute left behind in the original distillation flask. An example of a solution being separated through distillation would be the distillation of a solution of copper(II) sulfate in water, in which the water would be boiled away and collected and the copper(II) sulfate would remain behind in the distillation flask.

Everything that is familiar to us in our daily lives - from the land we walk on, to the water we drink and the air we breathe - is based upon the states of matter called gases, liquids, and solids.

When the temperature of a sample increases above the melting point of a solid, that sample can be found in the liquid state of matter. The particles in the liquid state are much closer together than those in the gaseous state, and still have a quite an attraction for each other as is apparent when droplets of liquid form. In this state, the weak attractive forces within the liquid are unable to hold the particles into a mass with a definite shape. Thus a liquid's shape takes on the shape of any particular container that holds it. A liquid has a definite volume but not a definite shape. Compared to to the gaseous state there is less freedom of particle movement in the liquid state since the moving particles frequently are colliding with one another, and slip and slide over one another as a result of the attractive forces that still exist between the particles, and hold the particles of the liquid loosely together. At a given temperature the volume of the liquid is constant and its volume typically only varies slightly with changes in temperature.

In the gas phase, matter does not have a fixed volume or shape. This occurs because the molecules are widely separated with the spaces between the particles typically around ten times further apart in all three spatial directions, making the gas around 1000 times less dense than the corresponding liquid phase at the same temperature. (A phase is a uniform portion of mater.) As the temperature of a gas is increased, the particles to separate further from each other and move at faster speeds. The particles in a gas move in a rather random and independent fashion, bouncing off each other and the walls of the container. Being so far apart from one another, the particles of a real gas only weakly attract each other such that the gas has no ability to have a shape of its own. The extremely weak forces acting between the particles in a gas and the greater amount of space for the particles to move in results in almost independent motion of the moving, colliding particles. The particles freely range within any container in which they are put, filling its entire volume with the net result that the sides of the container determine the shape and volume of gas. If the container has an opening, the particles heading in the direction of the opening will escape with the result that the gas as a whole slowly flows out of the container.

Other States of Matter