The half-life of a reaction, t1/2, is the amount of time needed for a reactant concentration to decrease by half compared to its initial concentration. Its application is used in chemistry and medicine to predict the concentration of a substance over time. The concepts of half life plays a key role in the administration of drugs into the target, especially in the elimination phase, where half life is used to determine how quickly a drug decrease in the target after it has been absorbed in the unit of time (sec, minute, day,etc.) or elimination rate constant ke (minute-1, hour-1, day-1,etc.). It is important to note that the half-life is varied between different type of reactions. The following section will go over different type of reaction, as well as how its half-life reaction are derived. The last section will talk about the application of half-life in the elimination phase of pharmcokinetics. We learn that the zero order kinetic rate law is as followed, where [A] is the current concentration, [A]0­ is the initial concentration, and k is the reaction constant and t is time:

In order to find the half life we need to isolate t on its own, and divide it by 2. We would end up with a formula as such depict how long it takes for the initial concentration to dwindle by half:

The t1/2 formula for a zero order reaction suggests the half-life depends on the amount of initial concentration and rate constant.

In First order reactions, the graph represents the half-life is different from zero order reaction in a way that the slope continually decreases as time progresses until it reaches zero. We can also easily see that the length of half-life will be constant, independent of concentration. For example, it takes the same amount of time for the concentration to decrease from one point to another point. 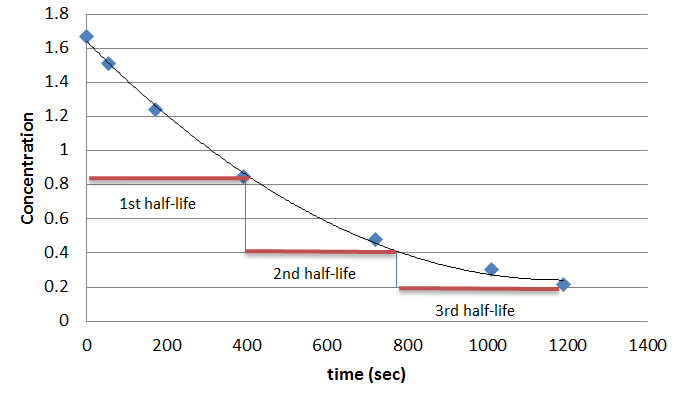 To find the half life we need to isolate t and substitute [A] with [A]0/2, we end up with an equation looking like this: As in zero and first order reactions, we need to isolate T on its own:

A following example is given below to illustrate the role of half life in pharmacokinetics to determine the drugs dosage interval. Another important application of half life in pharmacokinetics is that half-life tells how tightly drugs bind to each ligands before it is undergoing decay (ks). The smaller the value of ks, the higher the affinity binding of drug to its target ligand, which is an important aspect of drug design

2. Examine the following graph and answer What is the therapeutic range of drug B?

From the graph, estimate the dosage interval of drug B to ensure its maximum effect?

3. A patient is treating with 32P. How long does it takes for the radioactivity to decay by 90%? The half-life of the material is 15 days.

4. In first order half life, what is the best way to determine the rate constant k? Why?

How much time required for this reaction to be at least 50% and 60% complete?

Half-life: the amount of time it required for a reaction to undergoing decay by half.

2. Looking at the graph, we can see the therapeutic range is the amplitude of the graph, which is 5-15 mg/L

Even though it will get in the therapeutic range, such practice is not recommended.