This page explains how the fractional distillation (both in the lab and industrially) of an ideal mixture of liquids relates to their phase diagram.

On the last page, we looked at how the phase diagram for an ideal mixture of two liquids was built up. I want to start by looking again at material from the last part of that page. The next diagram is new - a modified version of diagrams from the previous page.

The secret of getting the more volatile component from a mixture of liquids is obviously to do a succession of boiling-condensing-reboiling operations. It is not quite so obvious how you get a sample of pure A out of this.

Fractional Distillation in the lab

A typical lab fractional distillation would look like this:

The fractionating column is packed with glass beads (or something similar) to give the maximum possible surface area for vapor to condense on. Some fractionating columns have spikes of glass sticking out from the sides which serve the same purpose. If you sketch this, make sure that you do not completely seal the apparatus. There has to be a vent in the system otherwise the pressure build-up when you heat it will blow the apparatus apart. In some cases, where you are collecting a liquid with a very low boiling point, you may need to surround the collecting flask with a beaker of cold water or ice. The mixture is heated at such a rate that the thermometer is at the temperature of the boiling point of the more volatile component. Notice that the thermometer bulb is placed exactly at the outlet from the fractionating column.

Relating what happens in the fractionating column to the phase diagram

Suppose you boil a mixture with composition C1. The vapor over the top of the boiling liquid will be richer in the more volatile component, and will have the composition C2.

That vapor now starts to travel up the fractionating column. Eventually it will reach a height in the column where the temperature is low enough that it will condense to give a liquid. The composition of that liquid will, of course, still be C2. So what happens to that liquid now? It will start to trickle down the column where it will meet new hot vapor rising. That will cause the already condensed vapor to reboil.

This new vapor will again move further up the fractionating column until it gets to a temperature where it can condense. Then the whole process repeats itself. Each time the vapor condenses to a liquid, this liquid will start to trickle back down the column where it will be reboiled by up-coming hot vapor. Each time this happens the new vapor will be richer in the more volatile component. The aim is to balance the temperature of the column so that by the time vapor reaches the top after huge numbers of condensing and reboiling operations, it consists only of the more volatile component - in this case, B.

Whether or not this is possible depends on the difference between the boiling points of the two liquids. The closer they are together, the longer the column has to be.

So what about the liquid left behind at each reboiling? Obviously, if the vapor is richer in the more volatile component, the liquid left behind must be getting richer in the other one. As the condensed liquid trickles down the column constantly being reboiled by up-coming vapor, each reboiling makes it richer and richer in the less volatile component - in this case, A. By the time the liquid drips back into the flask, it will be very rich in A indeed. So, over time, as B passes out of the top of the column into the condenser, the liquid in the flask will become richer in A. If you are very, very careful over temperature control, eventually you will have separated the mixture into B in the collecting flask and A in the original flask. Finally, what is the point of the packing in the column?

To make the boiling-condensing-reboiling process as effective as possible, it has to happen over and over again. By having a lot of surface area inside the column, you aim to have the maximum possible contact between the liquid trickling down and the hot vapor rising. If you didn't have the packing, the liquid would all be on the sides of the condenser, while most of the vapor would be going up the middle and never come into contact with it.

There is no difference whatsoever in the theory involved. All that is different is what the fractionating column looks like. The diagram shows a simplified cross-section through a small part of a typical column.

The column contains a number of trays that the liquid collects on as the vapor condenses. The up-coming hot vapor is forced through the liquid on the trays by passing through a number of bubble caps. This produces the maximum possible contact between the vapor and liquid. This all makes the boiling-condensing-reboiling process as efficient as possible. The overflow pipes are simply a controlled way of letting liquid trickle down the column.

If you have a mixture of lots of liquids to separate (such as in petroleum fractionation), it is possible to tap off the liquids from some of the trays rather than just collecting what comes out of the top of the column. That leads to simpler mixtures such as gasoline, kerosene and so on. 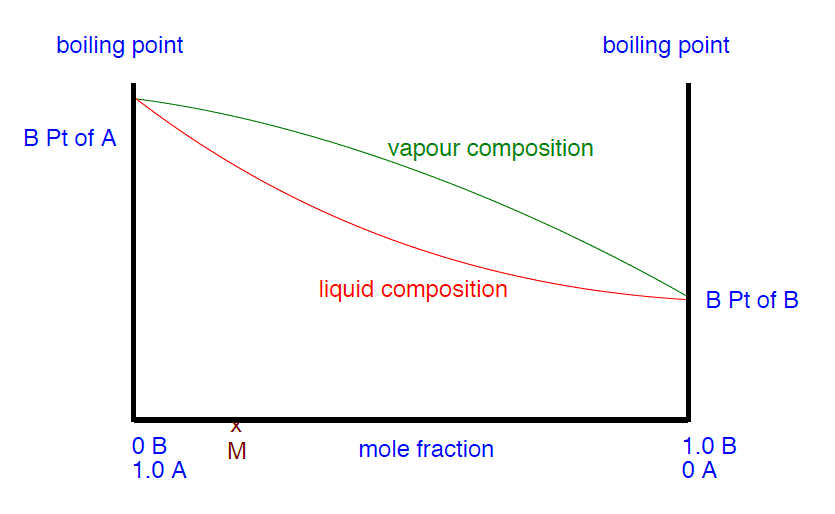