Since these configurational change notations are not appropriate for pericyclic reactions, new designations are needed. Cycloaddition reactions and sigmatropic rearrangements both involve pairs of σ-bond-making events (or a coupled bond-making & bond-breaking) associated with a π-electron system. If all the bonding events take place on the same face of the π-system the configuration of the reaction is termed suprafacial. If the bonding events occur on opposite sides or faces of the π-system the reaction is termed antarafacial. Suprafacial examples of these pericyclic transformations are shown below. The bracketed numbers that designate reactions of this kind sometimes carry subscripts (s or a) that specify their configuration. Thus the cycloaddition on the left may be termed a [4s + 2s] process.

Although cycloaddition reactions are concerted (no intermediate species are formed), the two new bonds are not necessarily formed in a synchronous fashion. Depending on partial charge distribution in the diene and dienophile reactants, the formation of one bond may lead the development of the other. Such unsymmetrical transition state bonding is termed asynchronous.

An example of an antarafacial [1,7] hydrogen shift is shown in the following diagram. The conjugated triene assumes a nearly planar coiled conformation in which a methyl hydrogen is oriented just above the end carbon atom of the last double bond. A [1s,7a] sigmatropic hydrogen shift may then take place, as described by the four curved arrows. With reference to the approximate plane of this π-electron system (defined by the green bonds), the hydrogen atom departs from the bottom face and bonds to the top face, so the transfer is antarafacial.

A different notation for configurational change is required for electrocyclic reactions. In these cases a σ-bond between the ends of a conjugated π-electron system is either made or broken with a corresponding loss or gain of a π-bond. For this to happen, the terminal carbon atoms of the conjugated π-electron system must be rehybridized with an accompanying rotation or twisting of roughly 90º. When viewed along the axis of rotation, the two end groups may turn in the same direction, termed conrotatory, or in opposite directions, termed disrotatory. The prefixes con and dis may be remembered by association with their presence in the words concur & disagree. These two modes of electrocyclic reaction are shown in the following diagram in the general form in which they are most commonly observed. Specific examples of these electrocyclic reactions were given earlier 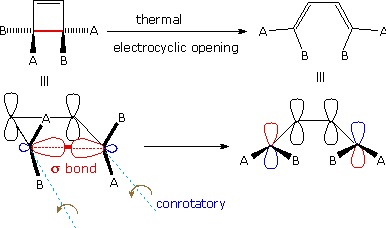