The Gabriel synthesis is a great way to make primary amines. This alkylation procedure doesn’t produce ammonium salts like the SN2 reaction would. Potassium phthalimide is treated with base, then a primary alkyl halide, and then either hydrazine, acid, or base.

The goal of Gabriel synthesis is to create a primary amine (RNH2). Doing a direct SN2 reaction would result in a quaternary amine salt, which can be pretty useless (unless you use Hofmann elimination). Before we get into the mechanism, let’s look at the reaction pathway.

We start off with phthalimide, treat it with base like KOH or NaOH, add an alkyl halide, and then liberate the resulting amine. Let’s break down each step of the mechanism:

Now that the nitrogen has a negative charge, it can act as a nucleophile and perform an SN2 reaction on an alkyl halide. Once that happens, we’re got a primary amine just waiting to be liberated.

At this point, there are a couple of variations. Usually, hydrazine (NH2NH2) is used, but sometimes acidic hydrolysis or basic hydrolysis is used. We’ll take a look at those mechanisms later. In any case, the nucleophile kicks off the nitrogen through a nucleophilic acyl substitution mechanism.

The protonated hydrazine is then deprotonated by the nitrogen that was just kicked off of one carbonyl. We still need to get the amine off of the second carbonyl, and the NH2 of the hydrazine repeats the process to kick it off.

The unreacted NH2 of the hydrazine then attacks the other carbonyl through another NAS mechanism to finally kick off the amine. Now there is a negative charge and a positive charge, and those need to be taken care of.

The negative nitrogen deprotonates the positive nitrogen, and drumroll please… we’ve got our primary amine (as well as the cyclic product phthalhydrazide)! In case you want to see the whole mechanism at once, here it is: Alternative Mechanisms with Acid or Base

Hydrazine is a very dangerous, reactive molecule. If you’ve seen or read The Martian, you might have an idea of how much care needs to be taken when working with it. Chemists try to minimize the risk of lab accidents, so sometimes they’ll find ways to work without dangerous chemicals like hydrazine. Luckily, the amine liberation portion of this reaction can be done in acidic or basic conditions.

The acidic hydrolysis version of the amine liberation works just like ester or amide hydrolysis, and the phthalimide becomes phthalic acid (o-dicarboxybenzene). Let’s take a look at the mechanism in acidic conditions. The mechanism shows H3O+, which can be made by adding any acid (like HCl) in aqueous solution. 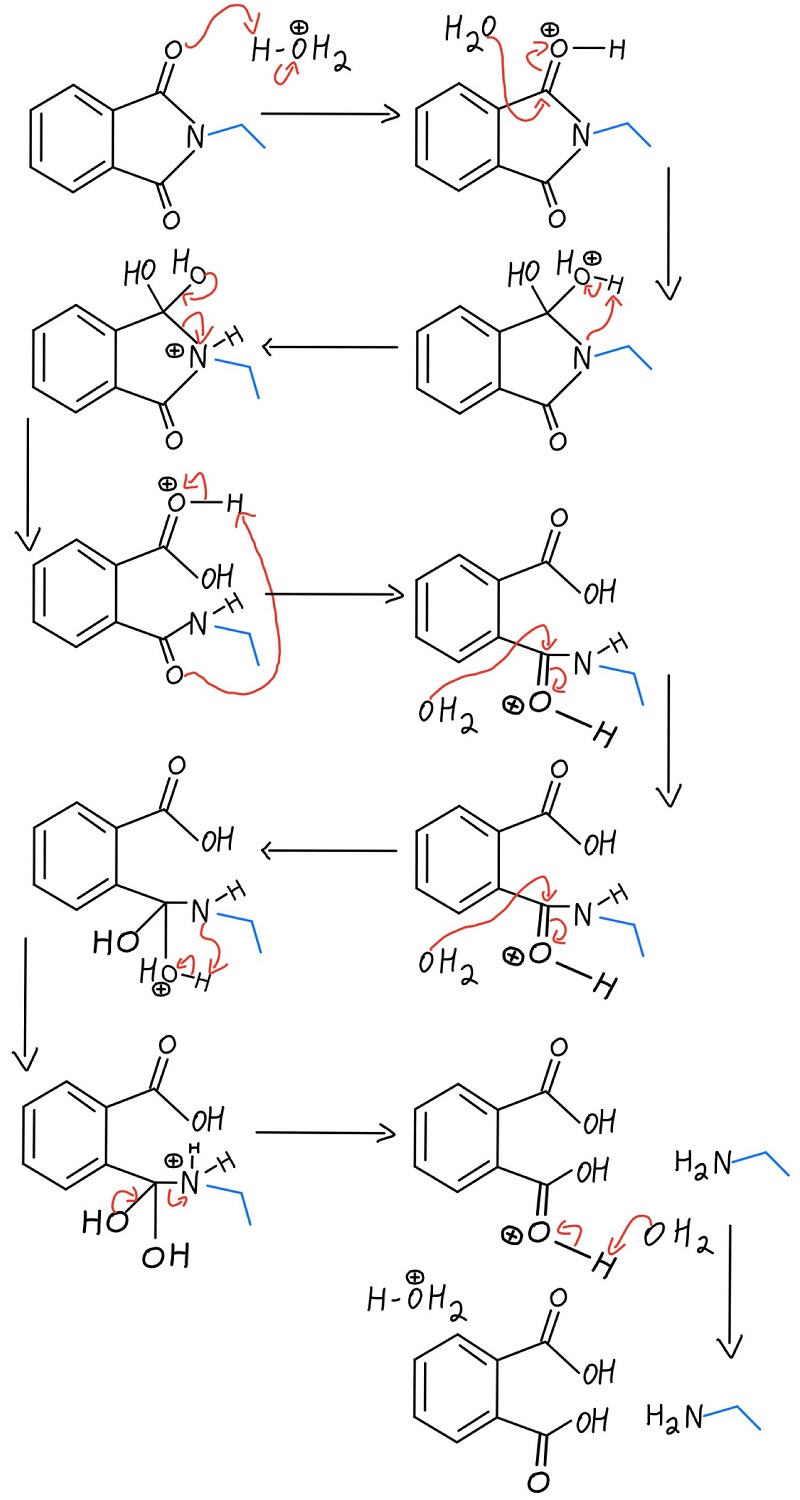 The mechanism in base is pretty similar to saponification (aka base-catalyzed ester hydrolysis), but with nitrogen instead of an oxygen attached to the R-group. For the record, look at how few steps the hydrazine and basic hydrolysis mechanisms have compared to the acidic version. If you have the choice on an exam, I’d recommend mechanisms with the fewest steps. This reaction can be used to make tons of different primary amines, including benzylamine, n-butylamine, and many more!