Natural rubber is formed from the isoprene monomer and has Z stereochemistry. The E polymer gutta-percha also occurs naturally, but is more brittle than rubber. Uses of this thermoplastic include dentistry, electrical insulators and the covering on golf balls.

Before 1839, the uses of natural rubber were somewhat limited. It became sticky in summer, hardened and cracked in winter, and was susceptible to attack by a variety of solvents. Charles Goodyear became interested in rubber in 1831, and bought the Eagle India Rubber Company of Woburn, Massachusetts, in 1838. In January of 1839, Goodyear accidentally placed a sample of rubber that had been mixed with sulfur and lead(II) oxide on a hot stove; the result was a product similar to charred leather, which did not melt below 138°C. Goodyear was granted a U.S. patent for his process (called vulcanization) in June of 1844. The story of vulcanization is an example of how major scientific and technological advances are often brought about as a result of an accidental discovery.

Notice that in the vulcanization process, the sulfur bridges are attached to allylic carbon atoms which connect the long Z polymer chains of rubber.

The amount of sulfur used in the vulcanization process will depend on the rigidity required in the product. For example, about 5% sulfur is used when producing rubber for rubber bands; about 30% sulfur is used when making rubber for use in battery casings. There are several characteristics of dienes and rubbers that you should recognize. First, be aware of the similarity between the polymerization of a diene and the 1,4-addition reactions of dienes. Second, recognize the similarity between a vulcanized rubber and a peptide containing cysteine cross-links. Third, be aware that as natural rubber contains double bonds, it will display some of the properties of simple alkenes.

The 1,4 polymerization of 1,3-butadiene shown in the reading produces the trans form of polybutadiene. However, it should be noted that the cis form shown here can also be formed.

Conjugated dienes can be polymerized much like alkenes (Section 8-10) to form important compounds like rubber. Diene polymers are more structurally complex and have the possibility of forming different isomers. The polymerization of conjugated dienes are commonly initiated by ether a radical or an acid. Interactions between double bonds on multiple chains leads to cross-linkage which creates elasticity within the compound. The polymerization takes place by a type of 1,4 addition to 1,3-butadiene which leads to the possibility of forming cis (Z) or trans (E) double bonds in the polymer product.

Rubber is undoubtedly the best known and most widely used compound of this kind. Natural rubber is an addition polymer that is obtained as a milky white colloidal suspension known as latex with the major source being a tropical rubber tree (Hevea brasiliensis). Natural rubber is from the monomer isoprene (2-methyl-1,3-butadiene), which is a conjugated diene hydrocarbon as mentioned above. The double bonds in rubber all have a Z-configuration, which causes this macromolecule to adopt a kinked or coiled conformation. This is reflected in the physical properties of rubber. Despite its high molecular weight (about one million), crude latex rubber is a soft, sticky, elastic substance. Chemical modification of this material is normal for commercial applications. Gutta-percha (structure below) is a naturally occurring E-isomer of rubber. Here the hydrocarbon chains adopt a uniform zig-zag or rod like conformation, which produces a more rigid and tough substance. Uses of gutta-percha include electrical insulation and the covering of golf balls.

Due to rubber being an amorphous polymer, its coiled polymer chains can be straightened by stretching. The more highly-ordered chains in the stretched conformation are entropically unstable and return to their original coiled state when allowed to relax.

Charles Goodyear accidentally discovered that by mixing sulfur and rubber, the properties of the rubber improved in being tougher, resistant to heat and cold, and increased in elasticity. This process was later called vulcanization after the Roman god of fire. Sulfur vulcanization is a chemical process for converting natural rubber or related polymers into more durable materials by heating them with sulfur or other equivalent curatives. Sulfur forms cross-links (bridges) between sections of polymer chains which results in increased rigidity and durability, as well as other changes in the mechanical and electronic properties of the material. A vast array of products are made with vulcanized rubber, including tires, shoe soles, hoses, and conveyor belts. At 2 to 3% crosslinking a useful soft rubber, that no longer suffers stickiness and brittleness problems on heating and cooling, is obtained. At 25 to 35% crosslinking a rigid hard rubber product is formed. The following illustration shows a section of amorphous rubber cross-linked with sulfur by the vulcanization process.

Neoprene (also polychloroprene or pc-rubber) is a family of synthetic rubbers that are produced by polymerization of 2-chloro-1,3-butadiene (chloroprene).  Neoprene exhibits good chemical stability and maintains flexibility over a wide temperature range. Neoprene is sold either as solid rubber or in latex form and is used in a wide variety of applications, such as laptop sleeves, orthopaedic braces (wrist, knee, etc.), electrical insulation, liquid and sheet applied elastomeric membranes or flashings, and automotive fan belts.

1) Draw out the mechanism for the natural synthesis of rubber from 3-methyl-3-butenyl pyrophosphate and 2-methyl-1,3-butadiene. Show the movement of electrons with arrows

2) Draw a segment for the polymer that may be made from 2-tert-butyl-1,3-butadiene.

3) Propose the mechanism for the acid catalyzed polymerization of 2-methyl-1,3-butadiene. 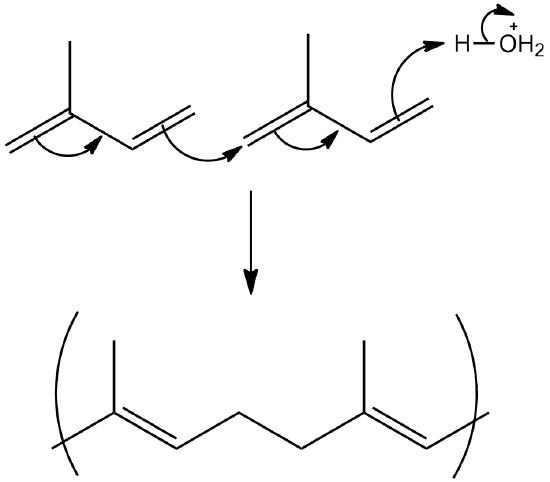