Monosaccharides (commonly called 'sugars') are four- to six-carbon molecules with multiple alcohol groups and a single aldehyde or ketone group. Many monosaccharides exist in aqueous solution as a rapid equilibrium between an open chain and one or more cyclic forms. Two forms of a six-carbon monosaccharide are shown below.

Disaccharides are two monosaccharides linked together: for example, sucrose, or table sugar, is a disaccharide of glucose and fructose. 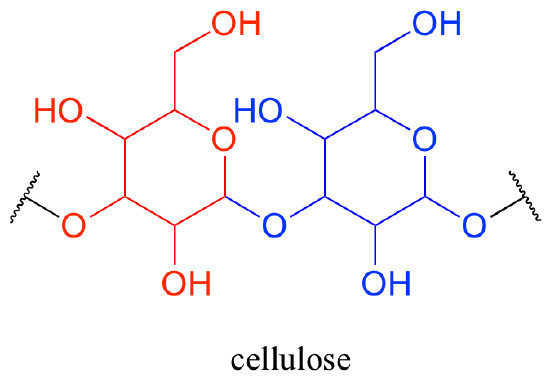 The linking group in carbohydrates is not one that we have covered in this chapter - in organic chemistry this group is called an acetal, while biochemists usually use the term glycosidic bond when talking about carbohydrates (again, the chemistry of these groups in the context of carbohydrate structures will be covered in detail in chapter 10).

The possibilities for carbohydrate structures are vast, depending on which monomers are used (there are many monosaccharides in addition to glucose and fructose), which carbons are linked, and other geometric factors which we will learn about later. Multiple linking (branching) is also common, so many carbohydrates are not simply linear chains. In addition, carbohydrate chains are often attached to proteins and/or lipids, especially on the surface of cells. All in all, carbohydrates are an immensely rich and diverse subfield of biological chemistry.

Intro to amino acids and proteins