The odor of a freshly crushed mint leaf, like many plant odors, is due to the presence in the plant of volatile \(\ce{C_{10}}\) and \(\ce{C_{15}}\) compounds, which are called terpenes. Isolation of these substances from the various parts of plants, even from the wood in some cases, by steam distillation or ether extraction gives what are known as essential oils. These are widely used in perfumery, as food flavorings and medicines, and as solvents. Among the typical essential oils are those obtained from cloves, roses, lavender, citronella, eucalyptus, peppermint, camphor, sandalwood, cedar, and turpentine. Such substances are of interest to use here because, as was pointed out by Wallach in 1887 and reemphasized by Ruzicka in 1935, the components of the essential oils can be regarded as derived from isoprene: The connection between the isoprene units in myrcene is between the 1- and 4-positions; this turns out to be more common than 1,1 and 4,4 linkages.

A wide variety of cyclic terpene hydrocarbons are known and, as multiples of \(\ce{C_5H_8}\), these have fewer double bonds than the open-chain terpenes. Because it is time consuming to show all the carbon and hydrogen atoms of such substances, the structures often are drawn in a convenient shorthand notation wherein the carbon-carbon bonds are represented by lines, carbon atoms being understood at the junctions or the ends of lines. By this notation, myrcene can be represented by formulas such as the following:

The left semicyclic structural formula is useful to show relationships with the open-chain (acyclic) and cyclic terpene hydrocarbons. A number of terpene hydrocarbons are shown in Table 30-1. The designation "terpene" is by custom specifically reserved for the \(\ce{C_{10}}\) compounds, the \(\ce{C_{15}}\) compounds being known as sesquiterpenes, the \(\ce{C_{20}}\) as diterpenes, \(\ce{C_{30}}\) as triterpenes, and so on. It should be apparent from Table 30-1 that the \(\ce{C_{10}}\) and \(\ce{C_{15}}\) compounds, which are the important components of essential oils, in reality are members of a much larger class of substances with carbon skeletons made up of isoprene units and occurring in both plants and animals. It is common to refer to all members of the group as isoprenoid compounds. The so-called isoprene rule, which correlates the structures of these substances, speaks for their synthesis in living systems from some common precursor with five carbon atoms. We can characterize the isoprenoid compounds as being biogenetically related. Isoprene itself does not occur naturally and appears to play no part in biosynthesis. The actual five-carbon intermediate appears to be isopentenyl pyrophosphate, and the role of this substance in biosynthesis will be discussed later: 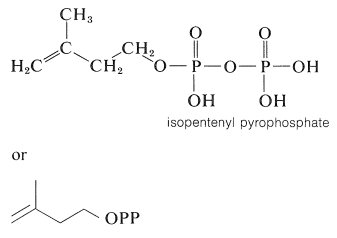 A great profusion of oxygen-containing isoprenoid compounds are known. Of particular importance in the acyclic series are the alcohols geraniol, nerol, and linaloöl, and the aldehydes geranial (citral a), neral (citral b), and citronellal: The alcohols occur in oil of rose and other flower essences. They have geranium or rose odors and are important perfume ingredients. The aldehydes have much stronger citruslike odors and occur as major or minor constituents in many essential oils, such as oil of citronella, oil of lemon, and so on.

Monocyclic and bicyclic oxygenated terpenes include some familiar and interesting substances such as menthone and menthol from peppermint oil, 1,8-cineole from eucalyptus, and ascaridole, which is a naturally occurring peroxide from chenopodium oil:

Camphor is a particularly well-known bicyclic terpene ketone, which has uses in medicine and as a plasticizer for nitrocellulose (Section 20-7):

For many years, the principal source of camphor was the Formosan camphor tree. It now can be synthesized on a large scale from \(\alpha\)-pinene. Some of the other types of naturally occurring bicyclic ketones follow:

Higher oxygenated terpenes include the sesquiterpene alcohol, farnesol, which has a lily-of-the-valley odor and occurs in ambrette-seed oil. On acid dehydration it gives \(\alpha\)-farnesene (Table 30-1) under some conditions, and bisabolene (a component of oil of bergamot) under others:

As we shall see, cyclization reactions of this general type seem to be important in terpene biosynthesis. The 6,7-trans-farnesol has been shown to have hormone action in some insects. It acts to regulate the changes from caterpillar to cocoon to moth.

Two important diterpene alcohols are vitamin A (Section 28-7) and phytol, which occurs as an ester of the propanoic acid side-chain of chlorophyll (Figure 20-6):

The phytyl group appears also as a side chain in vitamin K\(_1\) (Section 26-2B) and \(\beta\)-Carotene (Section 2-1) has vitamin A activity and apparently is oxidized in the body at the central double bond to give one mole of vitamin A.

The diterpene acid, abietic acid, is a major constituent of rosin, which is obtained as a nonvolatile residue in the manufacture of turpentine by steam distillation of pine oleoresin or shredded pine stumps. Abietic acid is used extensively in varnishes and as its sodium salt in laundry soaps. A number of compounds important to animal physiology have been identified as isoprenoid compounds. Notable examples are vitamin A, retinal (Section 28-7), and squalene (Table 30-1). Also, terpene hydrocarbons and oxygenated terpenes have been isolated from insects and, like farnesol, show hormonal and pheromonal activity. As one example, the juvenile hormone isolated from Cecropia silk moths has the structure shown in \(3\):

The structure was established by an impressive combination of chemical, spectroscopic, and synthetic methods with about \(200 \: \mu \text{g}\) of pure compound isolated from the abdomens of a myriad of male moths.\(^1\)

Juvenile hormone plays a critical role in maintaining the juvenile or larval stage of insects, and if its secretion is not controlled, normal development to the adult stage is prevented. Use of hormones or substances with hormonelike activity to control insect populations is an area of intense research interest and activity.\(^2\) The secretion of juvenile hormone is controlled by other hormones originating in the brain (brain hormone) and the phthoracic gland (molting hormone, ecdysone; see Table 30-2).