All chemical changes are accompanied by the absorption or release of heat. The intimate connection between matter and energy has been a source of wonder and speculation from the most primitive times; it is no accident that fire was considered one of the four basic elements (along with earth, air, and water) as early as the fifth century BCE. In this unit we will review some of the fundamental concepts of energy and heat and the relation between them. We will begin the study of thermodynamics, which treats the energetic aspects of change in general, and we will finally apply this specifically to chemical change. Our purpose will be to provide you with the tools to predict the energy changes associated with chemical processes. This will build the groundwork for a more ambitious goal: to predict the direction and extent of change itself.

Energy is one of the most fundamental and universal concepts of physical science, but one that is remarkably difficult to define in way that is meaningful to most people. This perhaps reflects the fact that energy is not a “thing” that exists by itself, but is rather an attribute of matter (and also of electromagnetic radiation) that can manifest itself in different ways. It can be observed and measured only indirectly through its effects on matter that acquires, loses, or possesses it.

The concept that we call energy was very slow to develop; it took more than a hundred years just to get people to agree on the definitions of many of the terms we use to describe energy and the interconversion between its various forms. But even now, most people have some difficulty in explaining what it is; somehow, the definition we all learned in elementary science ("the capacity to do work") seems less than adequate to convey its meaning. Although the term "energy" was not used in science prior to 1802, it had long been suggested that certain properties related to the motions of objects exhibit an endurance which is incorporated into the modern concept of "conservation of energy". René Descartes (1596-1650) stated it explicitly:

When God created the world, He "caused some of its parts to push others and to transfer their motions to others..." and thus "He conserves motion".*

Whatever energy may be, there are basically two kinds. Kinetic energy is associated with the motion of an object, and its direct consequences are part of everyone's daily experience; the faster the ball you catch in your hand, and the heavier it is, the more you feel it. Quantitatively, a body with a mass m and moving at a velocity v possesses the kinetic energy mv2/2.

The only additional information you need here is that

Potential energy is energy a body has by virtue of its location. But there is more: the body must be subject to a "restoring force" of some kind that tends to move it to a location of lower potential energy. Think of an arrow that is subjected to the force from a stretched bowstring; the more tightly the arrow is pulled back against the string, the more potential energy it has. More generally, the restoring force comes from what we call a force field— a gravitational, electrostatic, or magnetic field. We observe the consequences of gravitational potential energy all the time, such as when we walk, but seldom give it any thought.

If an object of mass m is raised off the floor to a height h, its potential energy increases by mgh, where g is a proportionality constant known as the acceleration of gravity; its value at the earth's surface is 9.8 m s–2.

Find the change in potential energy of a 2.6 kg textbook that falls from the 66-cm height of a table top onto the floor.

Similarly, the potential energy of a particle having an electric charge q depends on its location in an electrostatic field.

Electrostatic potential energy plays a major role in chemistry; the potential energies of electrons in the force field created by atomic nuclei lie at the heart of the chemical behavior of atoms and molecules.

"Chemical energy" usually refers to the energy that is stored in the chemical bonds of molecules. These bonds form when electrons are able to respond to the force fields created by two or more atomic nuclei, so they can be regarded as manifestations of electrostatic potential energy.

In an exothermic chemical reaction, the electrons and nuclei within the reactants undergo rearrangment into products possessing lower energies, and the difference is released to the environment in the form of heat.

Interconversion of potential and kinetic energy

Transitions between potential and kinetic energy are such an intimate part of our daily lives that we hardly give them a thought. It happens in walking as the body moves up and down. Our bodies utilize the chemical energy in glucose to keep us warm and to move our muscles. In fact, life itself depends on the conversion of chemical energy to other forms.

Kinetic energy is associated with motion, but in two different ways. For a macroscopic object such as a book or a ball, or a parcel of flowing water, it is simply given by ½ mv2.

But as we mentioned above, when an object is dropped onto the floor, or when an exothermic chemical reaction heats surrounding matter, the kinetic energy gets dispersed into the molecular units in the environment. This "microscopic" form of kinetic energy, unlike that of a speeding bullet, is completely random in the kinds of motions it exhibits and in its direction. We refer to this as "thermalized" kinetic energy, or more commonly simply as thermal energy. We observe the effects of this as a rise in the temperature of the surroundings. The temperature of a body is direct measure of the quantity of thermal energy is contains.

Once kinetic energy is thermalized, only a portion of it can be converted back into potential energy. The remainder simply gets dispersed and diluted into the environment, and is effectively lost.

Energy is measured in terms of its ability to perform work or to transfer heat. Mechanical work is done when a force f displaces an object by a distance d: w = f × d.

The basic unit of energy is the joule. One joule is the amount of work done when a force of 1 newton acts over a distance of 1 m; thus 1 J = 1 N-m. The newton is the amount of force required to accelerate a 1-kg mass by 1 m/sec2, so the basic dimensions of the joule are kg m2 s–2. The other two units in wide use. the calorie and the BTU (British thermal unit) are defined in terms of the heating effect on water. Because of the many forms that energy can take, there are a correspondingly large number of units in which it can be expressed, a few of which are summarized below.

Heat and work are both measured in energy units, so they must both represent energy. How do they differ from each other, and from just plain “energy” itself? In our daily language, we often say that "this object contains a lot of heat", but this kind of talk is a no-no in thermodynamics! It's ok to say that the object is "hot", meaning that its temperature is high. The term "heat" has a special meaning in thermodynamics: it is a process in which a body (the contents of a tea kettle, for example) acquires or loses energy as a direct consequence of its having a different temperature than its surroundings (the rest of the world).

Heat and work are processes and cannot be stored

Thermal energy can only flow from a higher temperature to a lower temperature. It is this flow that constitutes "heat". Use of the term "flow" of heat recalls the 18th-century notion that heat is an actual substance called “caloric” that could flow like a liquid.

Heat is transferred by conduction or radiation

Transfer of thermal energy can be accomplished by bringing two bodies into physical contact (the kettle on top of the stove, or through an electric heating element inside the kettle). Another mechanism of thermal energy transfer is by radiation; a hot object will convey energy to any body in sight of it via electromagnetic radiation in the infrared part of the spectrum. In many cases, a combination of modes will be active. Thus when you place a can of beer in the refrigerator, both processes are operative: the can radiates heat to the cold surfaces around it, and absorbs it by direct conduction from the ambient air.

So what is work?

Work refers to the transfer of energy some means that does not depend on temperature difference. 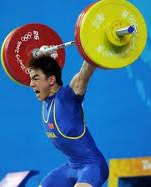 Work, like energy, can take various forms, the most familiar being mechanical and electrical. Mechanical work arises when an object moves a distance Δx against an opposing force f:

Electrical work is done when a body having a charge q moves through a potential difference ΔV.

Work, like heat, exists only when energy is being transferred.When two bodies are placed in thermal contact and energy flows from the warmer body to the cooler one,we call the process “heat”. A transfer of energy to or from a system by any means other than heat is called “work”.

Interconvertability of heat and work

Work can be completely converted into heat (by friction, for example), but heat can only be partially converted to work. Conversion of heat into work is accomplished by means of a heat engine, the most common example of which is an ordinary gasoline engine. The science of thermodynamics developed out of the need to understand the limitations of steam-driven heat engines at the beginning of the Industrial Age. A fundamental law of Nature, the Second Law of Thermodynamics, states that the complete conversion of heat into work is impossible. Something to think about when you purchase fuel for your car!