Cobalamin, or Vitamin B12, is the largest and the most complex out of all the types of Vitamins. The discovery of Cobalamin was made as scientists were seeking to find a cure for pernicious anemia, an anemic disease caused by an absence of intrinsic factor in the stomach. Cobalamin was studied, purified, and collected into small red crystals, and its crystallize structure was determined during an X ray analysis experiment conducted by Scientist Hodkin. A molecule structure of Cobalamin is simple, yet contains a lot of different varieties and complexes as shown in Figure 1. The examination of the vitamin’s molecular structure helps scientists to have a better understanding of how the body utilizes Vitamin B12 into building red blood cells and preventing pernicious anemia syndromes. 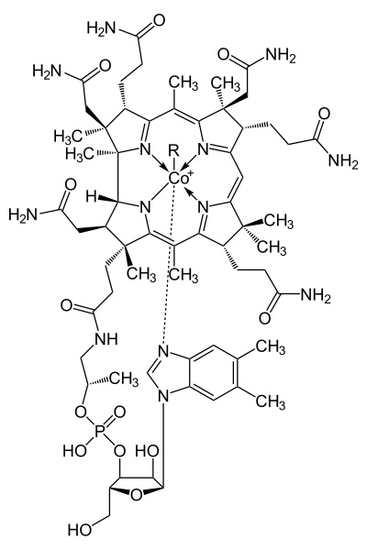 The metalloenzyme structure of Cobalamin presents a corrin ring with Cobalt, the only metal in the molecule, positioned right in the center of the structure by four coordinated bonds of nitrogen from four pyrrole groups. These four subunit groups are separated evenly on the same plane, directly across from each other. They are also connected to each other by a C-CH3 methylene link on the other sides, by a C-H on one side and by two pyrroles directly coming together. Together, they form a perfect corrin ring as shown in figure 2. The fifth ligand connected to Cobalt is a nitrogen coming from the 5,6-dimethhylbenzimidazole. It presents itself as an axial running straight down from the cobalt right under the corrin ring. This benzimidazole is also connected to a five carbon sugar, which eventually attaches itself to a phosphate group, and then straps back to the rest of the structure. Since the axial is stretched all the way down, the bonding between the Cobalt and the 5,6-dimethylbenzimidazole is weak and can sometimes be replaced by related molecules such as a 5-hydrozyl-benzimidazole, an adenine, or any other similar group. In the sixth position above the Corrin ring, the active site of Cobalt can directly connect to several different types of ligands. It can connect to CN to form a Cyanocobalami, to a Methyl group to form a methylcobalamin, to a 5’-deoxy adenosy group to form an adenosylcobalamin, and OH, Hydroxycobalamin. Cobalt is always ready to oxidize from 1+ change into 2+ and 3+ in order to match up with these R groups that are connected to it. For example, Hydroxocobalamin contains cobalt that has a 3+ charge while Methyladenosyl contains a cobalt that has a 1+ Charge. The point group configuration of Cobalamin is C4v. In order to determine this symmetry, one must see that the structure is able to rotate itself four times and will eventually arrive back to its original position. Furthermore, there are no sigma h plane and no perpendicular C2 axe. However, since there are sigma v planes that cut the molecules into even parts, it is clear to determine that the structure of Cobalamin is a C4v. With Cobalt being the center metal of the molecule, Cobalamin carried a distorted octahedral configuration. The axial that connects Cobalt to the 5,6 dimethyl benzimidazole is stretched all the way down to the bottom. Its distance is several times longer than the distance from the Cobalt and the attached R group above it. This sometimes can also be referred to as a tetragonal structure. The whole shape overall is similar to an octahedral, but the two axial groups are different and separated into uneven distances. Since there is only one metalloenzyme center in the system, the point group and configuration just mentioned is also assigned to the structure as a whole. Since the metallocoenzyme structure is stretched out, it is quite weakly coordinated and can be break apart or replaced with other groups as mentioned above.

Scientists have shown that both IR and Raman Spectroscopy were used to determine the structure of the molecule. This is determined by observing the character tables of point group C4v, the point group symmetry of Cobalamin. On the IR side, one can see that there are groups such as drz, (x, y), (rz, ry). On the other hand, on the Raman side, there are groups such as x square +y square, z square, x square – y square, xy, xz, yz. The Raman side indicated that there were stretching modes in the molecule and relates back to the stretching of the 5,6 dimethyl benzimidazole axial that connected directly below the Cobalt metal. The stretching can be seen in Figure 3. Cobalamin enzymes can catalyze a few different types of reactions. One of them is the reaction of Intramolecular rearrangements. During this rearrangement coenzyme is exchanged to the two groups attached to adjacent carbon atoms. Another reaction involves transferring the methyl group in certain methylation reactions, such as the conversion of homocysteine to methionine, biosysnthesis of choline and thymine etc. These interactions can bring beneficial values to the biological bodies.

Cobalamin has many beneficial effects in regard to biological existences. They play a role to maintain healthy body system and help to aid the production of the body’s genetic materials. Cyanocobalamin, one type of cobalamin, works to generate the forming of red blood cells and heal many different damages in the nervous system. Cobalamin also serves as a vital role in the metabolism of fatty acids essential for the maintainence of myelin. Studies have shown that people with Vitamin B12 deficiency will reveal irregular destruction of the myeline shealth, which leads to parlysis and death. Some of the other symptoms of the lack of cobalamin are poor growth, megaloblastic bone marrow, Gi tract changes, Leucoopenia and hyper-segmented nutrophills, degenerative changes in spinal cord and nervous system and excretion of methyl malonic acid and homocystin in urine.

Throughout the years, Vitamin B12 has shown to be essential for the functioning of the nervous system and the production of red blood cell. A study conducted by researchers at the National Institutes of Health, Trinity College Dublin, suggested that a deficiency in Vitamin B12 might increase the risk of neural tubes defect in children (Miller). Therefore, by studying the structure and function of Cobalamin, scientists can experiment and form Vitamin B12 in their laboratories and serve the community as a whole.