Liquid chromatography is a technique used to separate a sample into its individual parts. This separation occurs based on the interactions of the sample with the mobile and stationary phases. Because there are many stationary/mobile phase combinations that can be employed when separating a mixture, there are several different types of chromatography that are classified based on the physical states of those phases. Liquid-solid column chromatography, the most popular chromatography technique and the one discussed here, features a liquid mobile phase which slowly filters down through the solid stationary phase, bringing the separated components with it.

Components within a mixture are separated in a column based on each component's affinity for the mobile phase. So, if the components are of different polarities and a mobile phase of a distinct polarity is passed through the column, one component will migrate through the column faster than the other. Because molecules of the same compound will generally move in groups, the compounds are separated into distinct bands within the column. If the components being separated are colored, their corresponding bands can be seen. Otherwise as in high performance liquid chromatography (HPLC), the presence of the bands are detected using other instrumental analysis techniques such as UV-VIS spectroscopy1. The following figure shows the migration of two components within a mixture:

The first known chromatography is traditionally attributed to Russian botanist Mikhail Tswett who used columns of calcium carbonate to separate plant compounds during his research of chlorophyll. This happened in the 20th century (1901). Further development of chromatography occurred when the Nobel Prize was awarded to Archer John Porter Martin and Richard Laurence Millington Synge in 1952. They were able to establish the basics of partition chromatography and also develop Plate theory.

The stationary phase in column chromatography is most typically a fine adsorbent solid; a solid that is able hold onto gas or liquid particles on its outer surface. The column typically used in column chromatography looks similar to a Pasteur pipette (Pasteur pipettes are used as columns in small scale column chromatography). The narrow exit of the column is first plugged with glass wool or a porous plate in order to support the column packing material and keep it from escaping the tube. Then the adsorbent solid (usually silica) is tightly packed into the glass tube to make the separating column. The packing of the stationary phase into the glass column must be done carefully to create a uniform distribution of material. A uniform distribution of adsorbent is important to minimize the presence of air bubbles and/or channels within the column. To finish preparing the column, the solvent to be used as the mobile phase is passed through the dry column. Then the column is said to be "wetted" and the column must remain wet throughout the entire experiment. Once the column is correctly prepared, the sample to be separated is placed at the top of the wet column. A photo of a packed separating column can be found in the links.

Chromatography is effective because different components within a mixture are attracted to the adsorbent surface of the stationary phase with varying degrees depending on each components polarity and its unique structural characteristics, and also its interaction with the mobile phase. The separation that is achieved using column chromatography is based on factors that are associated with the sample. So, a component that is more attracted to the stationary phase will migrate down the separating column at a slower rate than a component that has a higher affinity for the mobile phase. Also, the efficacy of the separation is dependent on the nature of the adsorbent solid used and the polarity of the mobile phase solvent.

The type of adsorbent material used as the stationary phase is vital for efficient separation of components in a mixture. Several different solid may be employed. Adsorbent material can be chosen based on particle size and activity of the solid. The activity of the adsorbent is represented by its activity grade, which is a measure of an adsorbent's attraction for solutes in the sample solution. The solids with the highest activity grading are those that are completely anhydrous. Silica gel and alumina are among the most popular adsorbents used. Alumina caters well to samples that that require specific conditions to adequately separate. However, the use of non-neutral stationary phases should be done with great caution, an increase or decrease of pH in the alumina stationary phase may allow chemical reactions within the components of the mixture. Silica gel, however, is less active than alumina and can generally be used as an all-around adsorbent for most components in solution. Silica is also preferred because of its high sample capacity, making it one of the most popular adsorbent materials.

Flash chromatography is similar to HPLC in that the mobile phase is moved through the column by applying pressure to the solvent in order to achieve a quicker result. However, in flash chromatography, only medium pressure is applied to the system within the solution. In HPLC, pressures as high as 5000 psi can be applied in the column by high performance pumps.

Other Varieties of Liquid Chromatography

Plate theory and Rate theory are two theories that are applicable to chromatography. Plate theory describes a chromatography system as being in equilibrium between the stationary and mobile phases. This views the column as divided into a number of imaginary theoretical plates. This is significant because as the number of plates in a column increases or the height equivalent theoretical plates or HETP increases, so does the separation of components. It also provides an equation that describes the elution curve or the chromatogram of a solute it can also be used to find the volume and the column efficiency.

where L= column length and N= number of theoretical plates

The Rate theory on the other hand describes the migration of molecules in a column. This included band shape, broadening, and the diffusion of a solute. Rate theory follows the Van Deemter equation, which is the most appropriate for prediction of dispersion in liquid chromatography columns. It does this by taking into account the various pathways that a sample must travel through a column. Using the Van Deemter equation, it is possible to find the optimum velocity and and a minimum plate height. 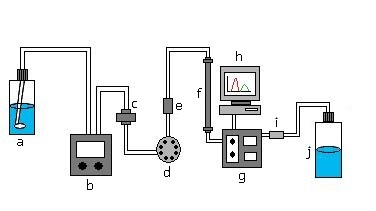 Liquid-solid column chromatography is an effective separation technique when all appropriate parameters and equipment are used. This method is especially effective when the compounds within the mixture are colored, as this gives the scientist the ability to see the separation of the bands for the components in the sample solution. Even if the bands are not visible, certain components can be observed by other visualization methods. One method that may work for some compounds is irradiation with ultraviolet light. This makes it relatively easy to collect samples one after another. However, if the components within the solution are not visible by any of these methods, it can be difficult to determine the efficacy of the separation that was performed. In this case, separate collections from the column are taken at specified time intervals. Since the human eye is the primary detector for this procedure, it is most effective when the bands of the distinct compounds are visible.

Liquid-solid column chromatography is also a less expensive procedure than other methods of separation (HPLC, GC, etc.). This is because the most basic forms of column chromatography do not require the help of expensive machinery like high pressure solvent pumps used in HPLC. In methods besides flash chromatography, the flow of the mobile phase, the detection of each separation band, and the collection of each component, are all done manually by the scientist. Although this introduces many potential instances of experimental error, this method of separation can be very effective when done correctly. Also, the glass wear used for liquid-solid column chromatography is relatively inexpensive and readily available in many laboratories. Burets are commonly used as the separating column, which in many cases will work just as well as an expensive pre-prepared column. For smaller scale chromatography, Pasteur pipettes are often used.

Flash chromatography has the potential to be more costly than the previous methods of separation, especially when sophisticated air pumps and vacuum pumps are needed. When these pieces of machinery are not needed, however, a vacuum line can be instead connected to an aspirator2 on a water faucet. Also, home-made pressurized air flow controllers can be made as shown previously.