An electrode by definition is a point where current enters and leaves the electrolyte. When the current leaves the electrodes it is known as the cathode and when the current enters it is known as the anode. Electrodes are vital components of electrochemical cells. They transport produced electrons from one half-cell to another, which produce an electrical charge. This charge is based off a standard electrode system (SHE) with a reference potential of 0 volts and serves as a medium for any cell potential calculation.

What are the mechanics of an electrode?

What processes are going on?

An electrode is a metal whose surface serves as the location where oxidation-reduction equilibrium is established between the metal and what is in the solution. The electrode can either be an anode or a cathode. An anode receives current or electrons from the electrolyte mixture, thus becoming oxidized. When the atoms or molecules get close enough to the surface of the electrode, the solution in which the electrode is placed into, donates electrons. This causes the atoms/molecules to become positive ions.

The opposite occurs with the cathode. Here the electrons are released from the electrode and the solution around it is reduced.

What is an electrode made of?

An electrode has to be a good electrical conductor so it is usually a metal. Now what this metal is made out of is dependent on whether or not it is involved in the reaction. Some reactions require an inert electrode that does not participate. An example of this would be platinum in the SHE reaction(described later). While other reactions utilize solid forms of the reactants, making them the electrodes. An example of this type of cell would be:

(In the above cell set up: the outside components are the electrodes for the reaction while the inner parts are the solutions they are immersed in)

Here you can see that a solid form of the reactant, copper, is used. The copper, as well as the silver, are participating as reactants and electrodes.

A Standard Hydrogen Electrode (SHE) is an electrode that scientists use for reference on all half-cell potential reactions. The value of the standard electrode potential is zero, which forms the basis one needs to calculate cell potentials using different electrodes or different concentrations. It is important to have this common reference electrode just as it is important for the International Bureau of Weights and Measures to keep a sealed piece of metal that is used to reference the S.I. Kilogram.

What is a SHE made of?

SHE is composed of a 1.0 M H+(aq) solution containing a square piece of platinized platinum (connected to a platinum wire where electrons can be exchanged) inside a tube. During the reaction, hydrogen gas is then passed through the tube and into the solution causing the reaction: 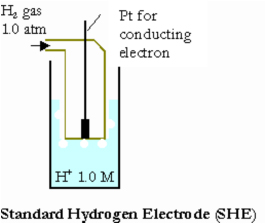 Platinum is used because it is inert and does not react much with hydrogen.

What is going on in this process?

First an initial discharge allows electrons to fill into the highest occupied energy level of Pt. As this is done, some of the H+ ions form H3O+ ions with the water molecules in the solution. These hydrogen and hydronium ions then get close enough to the Pt electrode (on the platinized surface of this electrode) to where a hydrogen is attracted to the electrons in the metal and forms a hydrogen atom. Then these combine with other hydrogen atoms to create H2(g). This hydrogen gas is released from the system. In order to keep the reaction going, the electrode requires a constant flow of H2(g). The Pt wire is connected to a similar electrode in which the opposite process is occurring, thus producing a charge that is referenced at 0 volts. Other standard electrodes are usually preferred because the SHE can be a difficult electrode to set up. The difficulty arises in the preparation of the platinized surface and in controlling the concentration of the reactants. For this reason the SHE is referred to as a hypothetical electrode.

Calomel electrode: This reference electrode consists of a mercury and mercury-chloride molecules. This electrode can be relatively easier to make and maintain compared to the SHE. It is composed of a solid paste of Hg2Cl2 and liquid elemental mercury attached to a rod that is immersed in a saturated KCl solution. It is necessary to have the solution saturated because this allows for the activity to be fixed by the potassium chloride and the voltage to be lower and closer to the SHE. This saturated solution allows for the exchange of chlorine ions to take place. All this is usually placed inside a tube that has a porous salt bridge to allow the electrons to flow back through and complete the circuit.

1. Which electrode oxidizes the solution in the half-cell? Anode or Cathode?

2. Why is the Standard Hydrogen Electrode important to calculating cell potentials?

4. Why is it important to use an inert electrode in situations like the SHE?

5. What is the standard half cell potential for the SHE?

2. It is important in calculating half-cell potentials because it serves as a reference. Without this electrode, there would be no basis to calculate values of cell potentials.

3. The left is the anode and the right is the cathode.

4. It is important to use an inert electrode in this situation because it will not react or participate in the reaction in the cell, just provide a surface area for the reaction to occur.