Compare the UV absorption spectrum of 1-butene to 1,3-butadiene.

Because of the additional overlap, the lowest energy transition in butadiene is lower than that in 1-butene. Therefore, the spectrum is expected to shift toward the red.

A better way to consider the situation is to examine all the possible orientations of the p-orbitals in 1,3-butadiene. The picture in Figure \(\PageIndex{12}\) provides a representation of 1.3-butadiene showing how the four p-orbitals are all positioned side-by-side to overlap with each other.

Rank these from high to low energy.

The orbital in which all four p-orbitals overlap would be the lowest in energy (Figure \(\PageIndex{14}\)). The next has two regions of overlap. The third has only one region of overlap and the highest energy orbital has no regions of overlap. Because there are four electrons to put in the orbitals (one from each of the contributing p-orbitals), the bottom two orbitals are filled and the top two are empty. The lowest energy HOMO to LUMO transition will be lower than observed in 1-butene. The UV/VIS spectrum of 1,3-butadiene is shown in Figure \(\PageIndex{15}\). In this case, the \(\lambda\)max value is at about 292 nm, a significant difference from the value of 176 nm in 1-butene. The effect of increasing conjugation is to shift the spectrum toward longer wavelength (lower frequency, lower energy) absorptions.

Another comparative set of conjugated systems occurs with fused ring polycyclic aromatic hydrocarbons such as naphthalene, anthracene and pentacene.

The spectra in Figure \(\PageIndex{16}\) are for benzene, naphthalene, anthracene and pentacene. Note that as more rings and more conjugation are added, the spectrum shifts further toward and into the visible region of the spectrum. 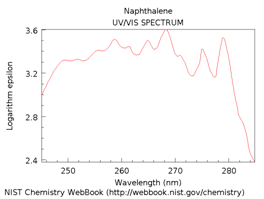