Biologists may feel that the task of remembering properties and reactions of elements is overwhelming. Right now more than 48 million chemical compounds and their properties are on file at the Chemical Abstracts Service of the American Chemical Society[1]. Anyone who wants information about these substances can look it up, although in practice it helps to have a computer do the looking! Even with a computer’s memory it is hard to keep track of so many facts–no single person can remember more than a fraction of the total.

Fortunately these millions of facts are interrelated in numerous ways, and the relationships help biologists and other non-chemists to remember some important facts. To illustrate this point, we shall present part of the descriptive chemistry of about 20 elements. It will be obvious that certain groups of elements are closely related in simple chemical reactions. Members of each group are more like each other than they are like any member of another group. Because of this close relationship a special name has been assigned to these collections of elements. For simple chemical reactions, it is possible to write general equations which apply to all members of a family of elements, but biologists have taught chemists that many generalizations don't hold in living sytems. In pure chemistry, we'll show that practical laboratory experience with one member gives a fairly accurate indication of how each of the others will behave; but in biological systems, even elements which are similar chemically may behave much differently.

A biologist may know that lithium is a mood stabilizer, and is used to treat depression, alcoholism, ADHD and ADD, aggression, PTSD, Alzheimer's disease, and to improve memory. Sodium may increase blood pressure, while potassium is used to treat hypertension (it's in "Lite Salt", potassium chloride, see below), for those who must restrict sodium intake. Both potassium and sodium are involved in neural conduction (which helps explain why Potassium is used in lethal injections). Rubidium behaves biologically like potassium, and is used in nuclear medicine to visualize brain tumors, while cesium causes hyperiritibility, but it is so rarely encountered that people rarely experience its effects. The notoriously radioactive Cs-137 isotope used in hospital reactors has been accidentally released in a famous incident in Goiânia, Brazil where poor residens were attacted by the blue glow. Because cesium behaves like potassium, it is readily absorbed in the body, but also readily excreted. 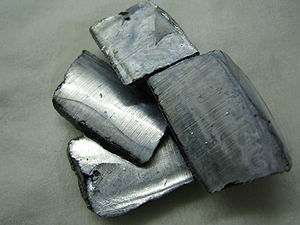 Surprisingly, these biological effects are related to one of the chemical properties of the alkali metals: they are all found as 1+ ions in nature. They can't exist as the element, because the metals react so violently with water. So when we refer to "potassium" (or any other alkali metal) in the diet, we are always referring to K1+ ions or M1+ in general.

All alkali metals react with the water, flying over the surface as H2 is produced (albeit at different rates). LiOH, NaOH, KOH, RbOH and CsOH are each produced respectively. These hydroxides are can be evidenced through the use of phenolphthalein indicator, which turns pink in the presence of OH- ions. While the reactivity of each metal differs (potassium is clearly more reactive with water than sodium, which is more reactive than lithium) all three are undergoing the same reaction. The first three reactions are:

Indeed, all alkali metals react with water in this exact way, according to a general equation:

Physical similarities are also apparent in the video. All five are metallic, silver-gray in color, and the first three metals are less dense than water (Rb has a density of 1.5, and Cs, 1.9). Li, Ni, and K float on the surface while they react. Other properties not obvious in the video exist. Alkali metals are soft and easily cut. The first three are solid at room temperature, but melt below 200°C, low for a metal, while Cs melts at 28°C and Rb at 39°C.

Beyond similar reactions with water, all alkali metals undergo analogous reactions with oxygen from the atmosphere, forming oxides, M2O. Alkali metals react with hydrogen to form hydrides, MH, and sulfur to form sulfides, M2S. In all of these compounds, the alkali metals are positive ions, Li+, Na+, K+, Rb+ or Cs+.

Each member of the chemical family of alkali metals has physical and chemical properties very similar to all the others, while (as noted above, biological properties may differ). In most cases all alkali metals behave the same with regard to the formulas of their compounds. The peroxides and superoxides are exceptions to this rule, but formulas for oxides and each of the other types of compounds we have described are identical except for the chemical symbol of each alkali metal.

Another set of elements with similar properties are fluorine, chlorine, bromine, and iodine, known collectively as the halogens. We'll explore chemical similarities below, but in spite of these chemical similarities, biological systems often distinguish among the halogens amazingly accurately. For example, only iodine (as iodide) absorbed by the thyroid gland and included in the thyroid hormones, thyroxine (T4) and triiodothyronine (T3). Amazingly, the other halogens are completely ineffective in synthesizing these thyroid hormones.

All four elements are diatomic molecules in their pure form, as: X2, where X=F, Cl , Br, and I, but the elements exist mostly as the combined state as 1- ions, or in covalent molecules, in nature. Their physical properties vary gradually from a light yellow gas (F2), yellow gas (Cl2), volatile red liquid with red fumes (Br2), to a purple solid that easily sublimes to a purple gas (I2).

The halogens halogens are all characterized by the ease of converting the element X2 to the X- ion, and the difficulty of converting the X- ion to higher oxidation states like oxygenated species such as ClO- (hypochlorite, in bleach), ClO2-, etc. The only class of enzymes known to catalyze the reaction of X- ions is the peroxidases (or "haloperoxidases"), and only H2O2 or O2 can cause the reaction. So when we speak of "iodine" in iodized salt (or most other halogens in our diet), we are generally referring to the I- ion, or X- ion in general.

Bioremediation of manmade halogen containing covalent molecules is of great current interest, because halogenated organic compounds are often persistent, bioaccumulative, and toxic (PBTs). But some species contain hydrolytic dehalogenases, which replace a halogen in a molecule with a much more innocuous -OH (hydroxyl group), and thus detoxify halogenated polluters, like polychlorinated biphenyls (PCBs), Dioxin, and DDT. Most of the halogenated bulk chemicals have been banned in most countries for years.

Another example of similarity in chemical properties is with mercury, whose reaction with bromine was discussed in the section covering macroscopic and microscopic views of a chemical reaction. Mercury reacts with other halogens in the same way:

These compounds are all gases, are water soluble, and, except for HF, are strong acids in aqueous solution.

Reaction of Alkali Metals and Halogens

All the halogens react with the alkali metals to form salts according to the reaction: The amazing changes that accompany the reaction should be noted. The alkali metals are extremely reactive, low melting metals, exploding in water, but the alkali ions in the high-melting product are stable and harmless. The halogens are toxic, colored, reactive gases, but react with alkali metals to give innocuous ions in white compounds. All of the resulting compounds have similar properties as well, such as tasting "salty". They all look like "salt" (NaCl), or the KCl in the image above, are high melting and boiling.

There are several other examples of related groups of elements. Beryllium, magnesium, calcium, strontium, barium, and radium all show similarities, and are called alkaline earth metals. All alkaline earths are silvery-gray metals which are ductile and relatively soft. However, they are much denser than the alkali metals, and their melting points are significantly higher. They are also harder than the alkali metals. Further, they all form form hydrides, MH2; oxides, MO; halides, MX2; with M = Mg, Ca, Sr, Ba, or Ra and X = F, Cl, Br, I. In all these compounds the alkaline-earth elements occur as dipositive ions, Mg2+, Ca2+, Sr2+, or Ba2+.

Another example of related elements are the coinage metals, copper, silver, and gold, which often occur naturally as elements, not in compounds. They have been used throughout history to make coins because they do not combine rapidly with atmospheric oxygen. The reddish brown and golden colors of copper and gold are distinctive among the metals, and the electrical conductivities of the coinage metals are greater than those of any other elements. The chalcogens (sulfur, selenium, and tellurium) are another related group of nonmetallic elements. Their hydrogen compounds (hydrogen sulfide, hydrogen selenide, and hydrogen telluride) are all gases which have revolting odors. The familiar smell of rotten eggs is due to hydrogen sulfide and the other two are even worse. These compounds are also highly poisonous and more dense than air. Numerous cases are known where persons working in ditches or other low-lying areas have been rendered unconscious or even killed by hydrogen sulfide resulting from natural sources or from industrial activities such as petroleum refining.

One group of elements, the noble gases (helium, neon, argon, krypton, xenon, and radon), forms almost no chemical compounds. Although small concentrations of the noble gases are present in the earth’s atmosphere, they were not discovered until 1894, largely because they underwent no reactions. Fluorine is sufficiently reactive to combine with pure samples of xenon, radon, and (under special conditions) krypton. The only other element that has been shown conclusively to occur in compounds with the noble gases is oxygen, and no more than a couple of dozen noble-gas compounds of all types are known. This group of elements is far less reactive chemically than any other.

From ChemPRIME: 4.1: Groups of Related Elements