As we begin to study in detail the mechanisms of biological organic reactions, we’ll see that the phenol side chain of the amino acid tyrosine (see table 5 at the back of the book), with its relatively acidic pKaof 9-10, often acts as a catalytic proton donor/acceptor in enzyme active sites.

Now the negative charge on the conjugate base can be spread out over two oxygens (in addition to three aromatic carbons). The phenol acid therefore has a pKa similar to that of a carboxylic acid, where the negative charge on the conjugate base is also delocalized to two oxygen atoms. The ketone group is acting as an electron withdrawing group - it is 'pulling' electron density towards itself, through both inductive and resonance effects.

Nitro groups are very powerful electron-withdrawing groups. The phenol derivative picric acid (2,4,6 -trinitrophenol) has a pKa of 0.25, lower than that of trifluoroacetic acid. Use a resonance argument to explain why picric acid has such a low pKa.

Consider the acidity of 4-methoxyphenol, compared to phenol: 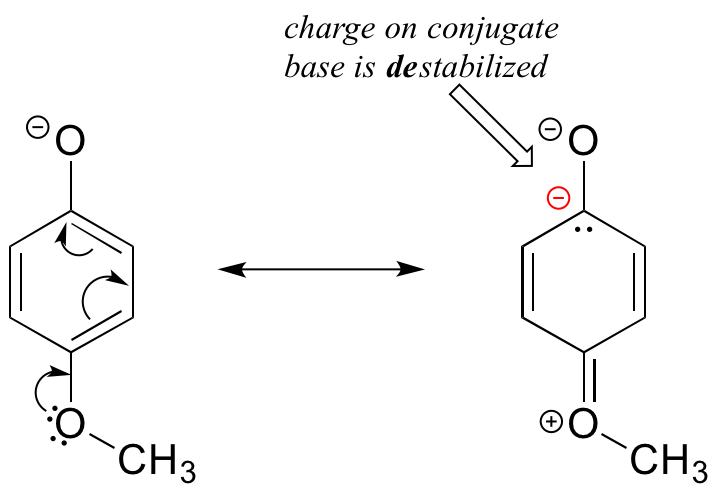 Because of like-charge repulsion, this destabilizes the negative charge on the phenolate oxygen, making it more basic. It may help to visualize the methoxy group ‘pushing’ electrons towards the lone pair electrons of the phenolate oxygen, causing them to be less 'comfortable' and more reactive. The example above is a somewhat confusing but quite common situation in organic chemistry - a functional group, in this case a methoxy group, is exerting both an inductive effect and a resonance effect, but in opposite directions (the inductive effect is electron-withdrawing, the resonance effect is electron-donating). As a general rule a resonance effect is more powerful than an inductive effect - so overall, the methoxy group is acting as an electron donating group. A good rule of thumb to remember: