17.2A: The three phases of radical chain reactions 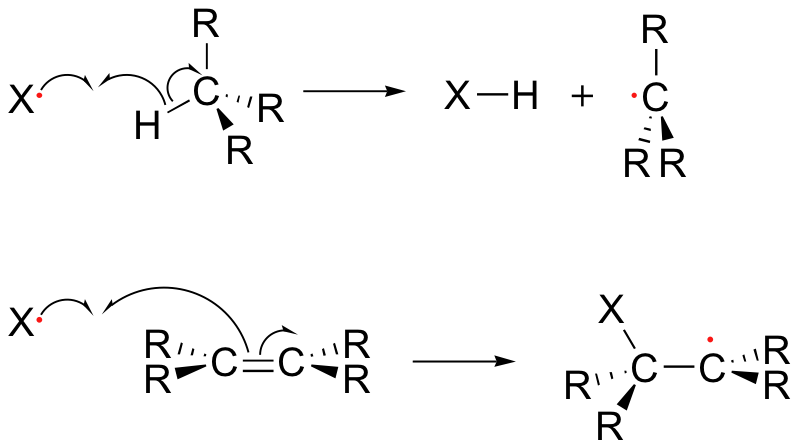 17.2B: Radical halogenation in the lab

The chlorination of an alkane provides a simple example of a free radical chain reaction. In the initiation phase, a chlorine molecule undergoes homolytic cleavage after absorbing energy from light:

The chlorine radical then abstracts a hydrogen, leading to an alkyl radical (step 2), which reacts with a second chlorine molecule (step 3) to form the chloroalkane product plus chlorine radical, which then returns to repeat step 2.

Alkane halogenation reactions exhibit a degree of regiospecificity: if 2-methylbutane is subjected to a limiting amount of chlorine, for example, chlorination takes place fastest at the tertiary carbon.

Unfortunately, chloroalkanes will readily undergo further chlorination resulting in polychlorinated products, so this is not generally a terribly useful reaction from a synthetic standpoint.

Alkanes can be brominated by a similar reaction. The regiochemical trends are the same as for chlorination, but significantly more pronounced (in other words, bromination is more regioselective). This is because hydrogen abstraction by bromine radical is much less exergonic than by chorine radical – and this in turn means that the transition state for abstraction by bromine resembles the resulting intermediate more closely than the transition state for abstraction by chlorine resembles its intermediate.

Alkenes and alkylbenzene can be halogenated with high regiospecificity using N-bromosuccinimide (NBS) in the presence of light or a radical initiator such as benzoyl peroxide. Bromination takes place specifically at the allylic position of alkenes and at the benzylic position of alkylbenzene (recall from section 17.1A that allylic and benzylic radicals are stabilize by resonance).

A mechanism for allylic bromination by NBS is shown below:

The Br2 in this process is formed in a side reaction between HBr and NBS (not shown).

Many household polymeric materials with which you are probably familiar are made with a radical chain reaction process. Polyethylene (PET), the plastic material used to make soft drink bottles and many other kinds of packaging, is produced by the radical polymerization of ethylene (ethene in IUPAC nomenclature). A radical initiator such as benzoyl peroxide undergoes homolytic cleavage when subjected to high temperatures.

In the propagation phase, the benzoyl radical (X• in the figure below) adds to the double bond of ethylene, generating a new organic radical. Successive ethylene molecules add to the growing polymer, until termination occurs when two radicals happen to collide. In the figure below, the growing PET polymer is terminated by a benzoyl radical, but in an alternative termination step two growing PET radicals could condense.

Other small substituted alkene monomers polymerize in a similar fashion to form familiar polymer materials. Two examples are given below.