Electronegativity is a measure of the tendency of an atom to attract a bonding pair of electrons. The Pauling scale is the most commonly used. Fluorine (the most electronegative element) is assigned a value of 4.0, and values range down to cesium and francium which are the least electronegative at 0.7.

Patterns of electronegativity in the Periodic Table Trends in electronegativity across a period

The positively charged protons in the nucleus attract the negatively charged electrons. As the number of protons in the nucleus increases, the electronegativity or attraction will increase. Therefore electronegativity increases from left to right in a row in the periodic table. This effect only holds true for a row in the periodic table because the attraction between charges falls off rapidly with distance. The chart shows electronegativities from sodium to chlorine (ignoring argon since it does not does not form bonds).

Trends in electronegativity down a group

Explaining the patterns in electronegativity

The attraction that a bonding pair of electrons feels for a particular nucleus depends on:

Why does electronegativity increase across a period?

Consider sodium at the beginning of period 3 and chlorine at the end (ignoring the noble gas, argon). Think of sodium chloride as if it were covalently bonded.

Both sodium and chlorine have their bonding electrons in the 3-level. The electron pair is screened from both nuclei by the 1s, 2s and 2p electrons, but the chlorine nucleus has 6 more protons in it. It is no wonder the electron pair gets dragged so far towards the chlorine that ions are formed. Electronegativity increases across a period because the number of charges on the nucleus increases. That attracts the bonding pair of electrons more strongly.

Why does electronegativity fall as you go down a group?

As you go down a group, electronegativity decreases because the bonding pair of electrons is increasingly distant from the attraction of the nucleus. Consider the hydrogen fluoride and hydrogen chloride molecules:

The bonding pair is shielded from the fluorine's nucleus only by the 1s2 electrons. In the chlorine case it is shielded by all the 1s22s22p6 electrons. In each case there is a net pull from the center of the fluorine or chlorine of +7. But fluorine has the bonding pair in the 2-level rather than the 3-level as it is in chlorine. If it is closer to the nucleus, the attraction is greater. Figure \(\PageIndex{4}\): The Electron Distribution in a Nonpolar Covalent Bond, a Polar Covalent Bond, and an Ionic Bond Using Lewis Electron Structures. In a purely covalent bond (a), the bonding electrons are shared equally between the atoms. In a purely ionic bond (c), an electron has been transferred completely from one atom to the other. A polar covalent bond (b) is intermediate between the two extremes: the bonding electrons are shared unequally between the two atoms, and the electron distribution is asymmetrical with the electron density being greater around the more electronegative atom. Electron-rich (negatively charged) regions are shown in blue; electron-poor (positively charged) regions are shown in red.

The OVERALL POLARITY of a molecule is determined by the shape of a molecule AND the polarity of its bonds. A molecule that contains polar bonds, might not have any overall polarity, depending upon its shape. The simple definition of whether a complex molecule is polar or not depends upon whether its overall centers of positive and negative charges overlap. If these centers lie at the same point in space, then the molecule has no overall polarity (and is non polar).

If a molecule is completely symmetric, then the dipole moment vectors on each molecule will cancel each other out, making the molecule nonpolar. A molecule can only be polar if the structure of that molecule is not symmetric.

A good example of a nonpolar molecule that contains polar bonds is carbon dioxide. This is a linear molecule and the C=O bonds are, in fact, polar. The central carbon will have a net positive charge, and the two outer oxygens a net negative charge. However, since the molecule is linear, these two bond dipoles cancel each other out (i.e. vector addition of the dipoles equals zero). And the overall molecule has no dipole (.

The implication of all this is that there is no clear-cut division between covalent and ionic bonds. In a pure covalent bond, the electrons are held on average exactly half way between the atoms. In a polar bond, the electrons have been dragged slightly towards one end. How far does this dragging have to go before the bond counts as ionic? There is no real answer to that. Sodium chloride is typically considered an ionic solid, but even here the sodium has not completely lost control of its electron. Because of the properties of sodium chloride, however, we tend to count it as if it were purely ionic. Lithium iodide, on the other hand, would be described as being "ionic with some covalent character". In this case, the pair of electrons has not moved entirely over to the iodine end of the bond. Lithium iodide, for example, dissolves in organic solvents like ethanol - not something which ionic substances normally do.

For the following compounds,

a) add lone pairs of electrons to complete octets

c) predict the molecular polarity (Remember to visualize each compound in three dimensions.) 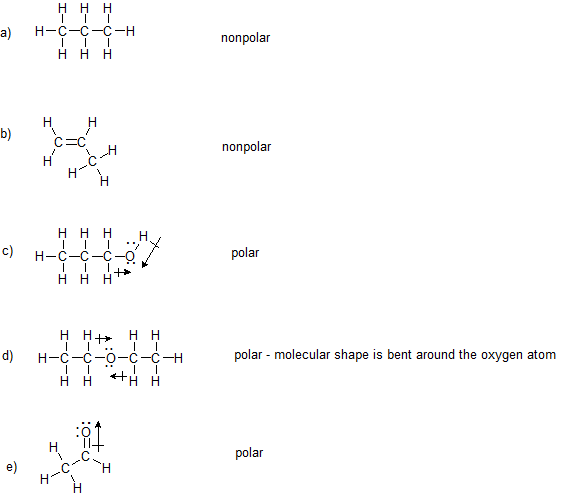