When alcohols react with a hydrogen halide, a substitution takes place producing an alkyl halide and water. This conversion can be achieved in basic solution with thionyl chloride and one equivalent of pyridine as outlined in the previous video.

Scope of HX Reaction with Alcohols

The reaction is acid catalyzed. Alcohols react with the strongly acidic hydrogen halides HCl, HBr, and HI, but they do not react with nonacidic NaCl, NaBr, or NaI. When we convert an alcohol to an alkyl halide, we carry out the reaction in the presence of acid and in the presence of halide ions, and not at elevated temperature. Halide ions are good nucleophiles (they are much stronger nucleophiles than water), and since halide ions are present in high concentration, most of the carbocations react with an electron pair of a halide ion to form a more stable species, the alkyl halide product. The overall result is an \(S_n1\) reaction.

Carbocation Rearrangement in the SN1 Reaction 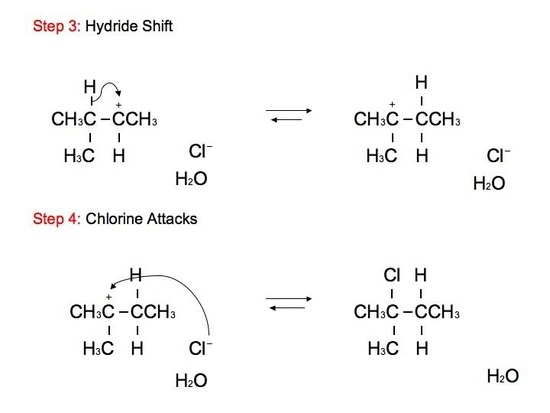