The application of term symbols to describe atomic spectroscopy was demonstrated and the corresponding selection rules are discussed. The Born-Approximation is introduced to help solve the N-bodies Schrödinger equation of molecules. This introduces the concept of a potential energy curve (surface). The LCAO was introduced as a mechanism to solve for Molecular Orbitals (MOs).

If we invoke the Born Oppenehimer approximation (i.e., fix the nuclear motion), we can drop the kinetic energy terms of the nuclei (notice semi-colon to represent the electronic wavefunction that depends parametrically on the geometry (\(R\)) of the system rather than a variable in the system like \(r_1\))

This can be solved though since it is not a three-body system (only one particle is moving). What about for the hydrogen molecule?

The relevant Hamiltonian (within BO approximation with fixed nuclei) is

using the distances defined above.

We can analytically solve the \(H_2^+\) system (within the Born-Oppenheimer approximation), but we often do not in physical chemistry courses, since the solutions are not applicable to multi-electron diatomics. That requires an approximation like that discussed below.

First we will extend the orbital approximation from atoms to molecules, so the general multi-electron wavefunction in a molecule (at a specific configuration of nuclei, \(R\)) is

Equation \(\ref{wrong}\) is an incorrect formulation of the true multi-electron molecular wavefunction since it is an orbital approximation.

We can expand each molecular orbital into any complete basis. The one that we choose here is the basis of all atomic orbitals on all nuclei. So

To be a complete basis, this expansion must include all possible atomic orbitals, which is not numerically feasible of course. But only certain orbitals dominate the expansion (sort of like perturbation theory expansions discussed before).

This is called the Linear Combination of Atomic Orbital (LCAO) approximation for describing molecular orbitals.

The LCAO approximation is a simple method of quantum chemistry that yields a qualitative picture of the molecular orbitals in the hydrogen diatomic molecules in terms of the known atomic orbitals of the nuclei in the molecule.

We must determine the values for the coefficients, \(C_A\) and \(C_B\). We could use the linear variational method to find a value for these coefficients, but for the case of \(\ce{H2^{+}}\) evaluating these coefficients is easy by a simple use of symmetry. Since the two protons are identical, the probability that the electron is near nucleus \(A\) must equal the probability that the electron is near nucleus \(B\). These probabilities are given by \(|C_A|^2\) and \(|C_B|^2\), respectively. There are two possibilities that satisfy the condition

These are shown below (with time dependence explicitly shown).

Within a linear variational method approach, the expansion of the molecular orbitals in terms of atomic orbitals in Equation \(\ref{LCAO}\) is an infinite sum. However, this is typically truncated to a finite (and feasible) sized basis set (i.e., \(j< \infty\)). The LCAO application for \(\ce{H_2^{+}}\) molecular cation uses a two-member basis set of only a 1s orbitals on each atom. However, additional atomic orbitals can be mixed in to improve the wavefunctions (marginally though).

As with typical expansions discussed in math classes, the larger the basis set (i.e., the number of terms in the expansion of Equation \ref{LCAO}), the better the resulting LCAO wavefunctions describe "reality". Although this is generally the case, there are limitations to this depending on the nature of the basis set functions and other factors (not discussed further).

Normalization and the Overlap Integral

The constants \(C_+\) and \(C_-\) are evaluated from the normalization condition. 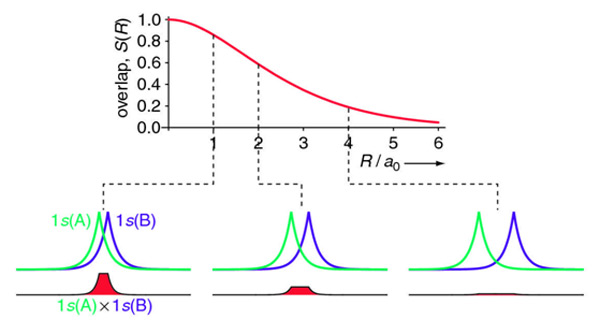 For the overlap integral of two 1s orbitals from the hydrogen dimer discussed above is difficult to evaluate analytically and is explained here. The final answer is:

Plot \(S\) as a function of \(R\). Find the ideal separation for which the overlap is a maximum. Created by Ghunbong Cheung in MATLAB

To find where the overlap is at its maximum, we set

There are four roots for \(R\) since it is a quartic polynomial, but only one logical solution:

This solution makes sense because these two orbitals are identical, so the maximum overlap should logical occur when the orbitals are exactly on top of each other.

The character of \(|\psi _+ \rangle\) and \(|\psi _{-} \rangle\) molecular orbitals are reflected in the energies, which can be calculated from the expectation value of the Hamiltonian,

The energy in Equation \ref{trial energy} is just the variational energy discussed previously within the linear variational method and since we are using normalized molecular orbitals, the denominator is unity and ignored.

Remember: This is the variational energy for this postulated wavefunction within (linear) variational method approximation.

These are called Diagonal matrix elements of the Hamiltonian in expressed in terms of the basis set we used (i.e., the 1s orbitals). If we selected a different basis, then they will change.

Since the wavefunctions are real

These are called off-Diagonal matrix elements of the Hamiltonian in expressed in terms of the basis set we used (i.e., the 1s orbitals). If we selected a different basis, then they will change.

Here the \(R\) dependence it explicitly shown. Now, let's take a closer look at the terms in this equation.

The Coulomb Integral for the 1s atomic orbitals is a function of \(R\), just like \(S\) it is easiest to solve in elliptical coordinates:

The first term is from the hydrogen atom Hamiltonian operating on the left (or right) to give \(E_H\) and leaving the \(S\) intergral. Equation \ref{9.4.7} then is

Now we can put these matrix element expansions (with new integrals) back into Equation \(\ref{9.4.5}\) to get the expression for the energy (of a single electron in this system)

This expression is a function of \(R\) since the three integrals outlines above are functions of \(R\) as is the Coulombic repulsion term. Equation \(\ref{9.4.10}\) tells us that the energy of the \(H_2^+\) molecule is

These additional interactions are given by \( \dfrac {J \pm K}{1 \pm S}\). If the protons are infinitely far apart then only \(E_H\) is nonzero. To get a chemical bond and a stable H2+ molecule,