4. Which of the following molecules does not have a net dipole moment?

Which of the following best represents the 3-dimensional view of \(H_2N^-\)?

Which of the following represents the best resonance structure for \(N_2O\)?

Identify the differences in:

Iodine reacts with fluorine to yield several compounds with the molecular formula \(IF_n\) with \(n\) varying from 1, 3, 5, and 7.

A. The Lewis structures (figure needs lone pairs on fluorines to be indicated) An acceptable electron-dot structure should not have formal charge on the chlorine atom. There should be a formal charge of -1 on one of the oxygen atoms such the species is a -1 anion. There are 2 acceptable structures which are equivalent resonance structures. The two Cl-O bonds will have equal bond lengths that will be intermediate in value between a single and double bond. Counting the lone pairs, there are 4 groups of charge around the chlorine so a bent structure is predicted.

b) Compare the nitrogen-oxygen bond lengths of the two isomers. Discuss the basis for your order.

d) In which isomer would you expect all the heavy atoms to lie in the same plane?

Nitromethane is a sure winner. The oxygen atoms and the carbon atom are directly attached to the nitrogen atom which has 3 groups of charge around it and therefore a trigonal planar geometry. All 4 atoms must therefore lie in the same plane.

Use the information in the table of Q12 to draw each of the (3-D) molecules.

Write resonance structures for the nitrate ion (\(NO_3^-\)), if any exist.

valence electrons. The Lewis structure shows that structures can be drawn with the electrons delocalized over multiple oxygen pairs. 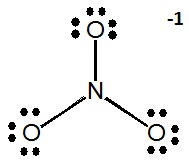 Notice that the nitrogen atom does not have a proper octet, so the a pair of electrons must be taken from an oxygen atom to form a new double bond (you can pick from any of the three oxygen atoms).

As with all resonance structure, none of the above structures is the true structure, which is an average of all three, and cannot be represented by a single Lewis structure.

Each oxygen/nitrogen bond is stronger than a simple single bond. Take the average of the bond order for the resonance structures to ge the "accurate" bond order. For example, the top nitrogen/oxygen bond will have a bond order of

By symmetry, each of the other two bonds will have the same bond order.

NOTE: In the \(NO_3^-\) ion, each resonance structure are equivalent and therefore will have the same weight in determining the nature of the electronic structure. This is why the bond order was calculated as a simple average above. However, this is not the case with all molecules and in fact some resonance structures may be nonequvalent and will carry greater weights and more closely resembles the true electronic structure of the molecule/ion. However, this is not an aspect typically discussed in general chemistry classes.