There are four common ways to express numbers, and some of these are preferable when the numbers are very large or very small.

Unlike a floating numbers scientific notation has two parts, first a number with only one digit to the left of the decimal and a variable number of digits to the right of the exponent, which is multiplied by 10 to a power, such that it equals the value of the desired number. We call the power of 10 its exponent.

Where n is the power and the underscore represents the number of digits in the number. Note, due to this format, scientific notation always has an unambiguous number of significant digits.

Q&A: What is Exponentiation?

Q&A: Can the exponent have units?

No, the exponent can not have units, it is the number of times you multiplied or divided the number by 10, but you write the units behind the number expressed in scientific notation.

SI prefixes are similar to scientific notation, where you express a number with between 1 and 3 digits to the left of the decimal point, times 10 to the power of 3, but use the appropriate SI prefix to represent 10 to the power of 3. Note, it is common to express floating numbers with a comma every three decimal places (power of 103). So the number

Let’s consider the number 26794. It can be expressed in scientific notation or as a log 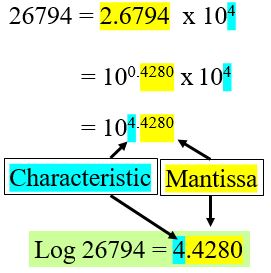 It is important to be able to preserve the number of significant Figures in calculations based on the precision of the data used in those calculations, and there are two sets of rules, one for multiplication and division, and the other for addition and subtraction.

How many significant Figures are in the answer to the following problem?

Two, you do not even need to do the math to answer this question.

How many significant Figures are in the answer for 99 + 1?.

Note: in the above exercise, a number with two sig. figs was added to a number with one sig fig., and the answer had three sig. figs. Unlike multiplication and division, you must do the math to determine the number of sig. figs for addition and subtraction.

When you have to truncate an answer by removing numbers you may round up or round down. Truncation is removing a digit from the number, and all digits smaller than that digit.

*Note, when the truncated value equals 5 you round in the direction that makes the answer end in an even number

Contradictions of the Rules

Sometimes the rules break down and you need to be aware of it. For example, if you weight two nickels and each nickel weights 5.0 grams, what is the weight of both nickels? Well, multiplication is the repetition of addition and so you could multiply the weight of each nickel by two

or you could add the mass of the two nickels

So when you multiplied the answer would have two significant Figures because the number with the least was the measured mass (the 2 nickels was an exact counted number), but when you added, they were all known to the tenths position, and so your answer has 3 significant digits.

This is easy to see by looking at the solutions to the next two examples, where you convert a fraction and a number greater than (or equal to) 10 to scientific notation.

Step 2: Since we multiplied it by 103 we must also divide by 103 (effectively multiplying the original number by 1 and not changing it's value). Than we express the factor in the denominator as a power of 10.

Note, once you get the hang of this you can just count the number of digits you need to move the decimal to bring the original number to one digit to the left of the decimal and multiply that number by 10 to the negative value of those digits. Here we moved the decimal three positions to the right, so we multiply by 10-3 (ie., divide by 103).

Note, once you get the hang of this you can just count the number of digits you need to move the decimal to bring the original number to one digit to the left of the decimal and multiply that number by 10 to the value of those digits. Here we moved the decimal two positions to the left, making it 100 times smaller, so we multiply by 102 to maintain the same value.

How can you express the number 400 to 2 significant digits?

You must use scientific notation.

As scientific notation always has a decimal point there is never a problem expressing significant digits.

Try plugging the following number into your calculator. Odds are you will get an error message, and you need to know how to solve calculations that are bigger or smaller than your calculator can handle.

This can easily be solved with your calculator, the challenge is how do you determine the number of significant Figures in the answer. To do this you need to line them up by multiplying everything by the same power of 10.

Would you believe the answer has four significant Figures? (The solution to this problem is below the following video.)

Solve the following problem and report answer to the correct number of significant Figures:

You first need to express all numbers to the same power so you can line up the decimal point. It is suggested that you choose the largest power and make everything else a fraction.

There are three fundamental types of conversions that you will need to be able to perform. The first involve different ways of expressing numbers within the same scale, which include transforming floating numbers to SI prefixes and scientific notation. The second involves converting from one scale to another, like the metric system to the English [read: American] system, and you are expected to know that 2.54 cm=1 inch [read: memorize that]. The third involves physical constants of specific substance, where you convert from one type of physical measurement to another. Density is such a physical constant, and it allows you to convert mass measurements to volume.

A. Different prefixes of same base scale (cm -> Km)
B. Conversions between scales (cm -> in)
C. Physical Constants d=M/V

How many micrograms are in a kilogram?

Set up conversion factors based on an equivalence statements.

so, this gives two conversion factors

In the advanced technique (below) you will solve this problem with only one conversion factor.

How many micrograms are in a kilogram?

Set up a single conversion factor based on an equivalence statement.

so, this gives two conversion factors

The following video shows you how to do SI conversions of numbers expressed in scientific notation. The trick is to write the SI prefix in terms of its power of 10.

UALR students are required to memorize the following conversion factors

What is the volume in Gallons of a 1.00 cubic foot object?

(Try this first, the answer is at the bottom of the video. )

Many substances have physical properties showing a linear relationship that can be described by the equation of a straight line Y=mX+b. If these are extensive properties (section 1.6.1), then the Y intercept (b) equals zero and this takes the form of Y=mX, which is an equivalence statement, and allows one to convert measurements in the unit of X to those of the unit of Y. These are often tabulated by the constant m \( \left (m=\frac{Y}{X} \right )\), which allows conversions of measurements between the units of X and Y.

This can be understood by looking at one such constant, density, which is the linear proportionality constant for the extensive properties of mass and volume, where m = dv (the y intercept is zero because if you have nothing, its mass and volume both equal zero - review extensive properties). So if you know the density of something, you can convert its mass to volume, or its volume to mass. Therefor it is common to compile tables of densities and other physical constants.

It should be stated that although these generate conversion factors, they are really describing relationships, that is, mass and volume describe completely different aspects of matter and density allows you to convert from one to another. This is completely different than definind 12 inches as a foot, where inches and feet are different units that describe the same thing.

Density is defined as

This gives the equivalence statement

and there are thus two conversion factors

(Please do this before looking up the answer at the bottom of the video.)

0.5360 L, note, the number of sig figs was determined by the density and not the starting mass.

How many pounds would 61.8 gallons of water weight if at a given temperature the water has a density of 0.98g/mL?

Note the answer has 2 significant digits because of the density.

A fraction is a \(\frac{Part}{Whole}\), with a value between 0 and 1. Percentage is simply the fraction x 100, where the 100 is a defined number. Fractions and percentages are commonly used to quantify a multicomponent system or mixture. In chemistry there are sort of two ways of quantifying matter, to count the number of particles or measure the mass of each type of particle. It is common (although not required) to use the fraction to represent the fraction of a sample based on the number of particles (mole fraction), and use % to represent the mass distribution (mass %).