Consider, for instance, a hydrogen bond between two water molecules:

The relative importance of these interactions can differ significantly from one system to another.

In considering how to better understand hydrogen bonding both Brønsted and Lewis acid-base concepts have been employed. In Brønsted terms hydrogen bonding has been described as involving partial transfer of a hydrogen ion from D to A. The Lewis definition is often more useful for understanding the role of covalency, however, owing to the ease with which Lewis theory accommodates orbital interactions through the Frontier orbital approach to chemical bonding and reactivity. Moreover, from the classical definition of hydrogen bonding as involving donation of H by a D-H unit and its acceptance by a lone pair on A it is apparent that in some sense D-H is acting as a Lewis acid in donating an electron-deficient H to A while A is acting as a Lewis base in using its lone pair to accept it. In this respect the hydrogen bond is perhaps better thought of as involving Lewis acid-base adduct formation between a D-H bond and A. Hydrogen bonds like the one above are called asymmetric hydrogen bonds since the D-H bond is shorter and more stabilized than the A-H bond. When D and A are of equal or similar energy, however, the D-H and A-H interactions are of similar energy, the H will be centered in between D and A, making it difficult to identify which atom is the donor and which is the acceptor. Such H-bonds are called symmetric H-bonds. An example is the H-bond in [F---H----F]-, for which the stabilizing and destabilizing frontier orbital interactions are In general symmetric hydrogen bonds are stronger and more stable than asymmetric ones. In fact, one approach to predicting the strength of classical hydrogen bonds called Gili's pKa Slide Rule‡ considers the pKa of the protonated form of both the neutral donor (D-H) and the neutral acceptor (A, which is then protonated to H-A+). In this approach the H-bond is considered to involve transfer of a hydronium ion between the donor and acceptor and the pKa values of the donor and acceptor serve as proxies for D- and A's ability to draw the hydrogen ion in the H-bond to itself. When the

Specifically, Gili proposed the following criterion for predicting the strength of these ordinary hydrogen bonds.

Experimentally, the existence of hydrogen bonds and their approximate strength is inferred from crystallographic bond distances and angles, changes in the D-H vibrational frequency, and shifts in 1H NMR peak positions, although all such measures should be interpreted with caution.

If hydrogen bonds involve full or partial coordinate covalent bond formation between a D-H bond and an acceptor site then the resulting adduct should exhibit evidence of bond formation. In practice such evidence is sought from three main sources:

1. Crystallographic bond distances and angles. In the structure of crystalline solids hydrogen bonds can be distinguished from Van der Waals contacts in that

2. D-H vibrational frequencies. Since hydrogen bonding involves weakening of the D-H bond and the formation of a H-A bond in theory both the D-H and A-H vibrational modes will be found in the IR spectrum of a hydrogen-bonded system, albeit redshifted to lower wavenumbers than the unweakened D-H and A-H bonds. In practice the shift in the D-H vibrational band to lower wavenumbers (along with a broadening and intensifying of the band) is taken as evidence for hydrogen bonding (Figure 6.5.1.1).

3. Shifts in the 1H NMR peak position of the donor hydrogen. As the hydrogen is partially transferred from D to A it becomes deshielded and so is shifted downfield, sometimes by as much as several ppm.

Care should be taken in applying these criteria since:

* Of course in solutions where there are many hydrogen bonding interactions many of the water molecules might simultaneously act as a hydrogen bond donor and acceptor. 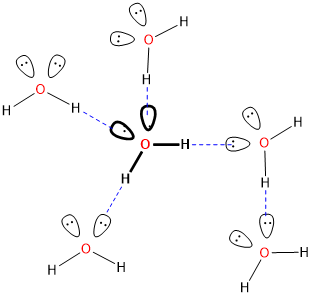 ** X-H \(\pi\) interactions are interactions between the partial positive charge on the H end of a polar X-H bond and a negatively-charged \(\pi\)-bond. These are particularly for understanding hydrogen bonded systems in which as \(\pi\)-system serves as the hydrogen bond acceptor,. Examples of X-H interactions in which benzene is the acceptor are illustrated below. † In a multicenter H-bond the D-H is donated to multiple acceptors simultaneously.

†† The MOs shown in the diagrams were calculated by performing ab initio calculations at the 6-31G** level. Those for the symmetric H-bond correspond to FHF- and the assymetric H bond to OHF-.

‡ So called because it involves a sliding bar chart with common classes of H-bond donors and acceptors that may be slid along the rule in a manner similar to the operation of a pre-late 20th Century device for performing mathematical computations called a slide rule.

‡‡ for example, intramolecular hydrogen bonds are sometimes constrained to by the overall geometry of the interacting groups.