Human serum albumin (HSA) is a 66.5 kD protein found in human blood plasma and cerebrospinal fluid. In fact, it is the most abundant protein in human blood, constituting over half of plasma protein with a concentration of 0.6 mM under normal physiological conditions.1

HSA is a heart-shaped molecule comprised of three homologous domains (referred to as I, II, and III). Each domain contains two helical subdomains (referred to as A and B) connected by a random coil.2 The structural arrangement of HSA engenders it’s extraordinary ligand binding capacity. Various classes of ligands, including fatty acids (ie. myristate), drugs (ie. ibuprofen or warfarin), hormones (ie. thyroxine), and metal ions are bound and transported by albumin.3-5 Thus, HSA is commonly referred to as a “molecular depot.”

Metal binding to HSA has been extensively explored in various contexts. For example, HSA is an important transporter of essential metal ions, like Cu(II) and Zn(II), but it can also bind toxic metals, such as Ni(II) and Cd(II). Furthermore, HSA-metal binding has been exploited in the development of anticancer drugs due to its ability to bind soft Pt(IV) and Au(I).6 For a comprehensive review of metal ion interactions with HSA, see reference 6. In this lesson, we will focus on only the interactions between HSA and two metals which are key components in many biological processes: copper and zinc (see figure below). This is a ribbon diagram of human serum albumin with both Cu(II) and Zn(II) bound in their high-affinity binding sites. This structure was created by merging the protein crystal structure of HSA bound to Zn(II) at pH 9.0 (PDB 5IJF) and the small molecule crystal structure of the DAKH model peptide bound to Cu(II) (CCDC-809109). You can print or download a 3D model of this image on the Bioinorganic 3D Shapeways workshop.

Copper is an essential metal ion involved in a variety of metabolic processes, including mitochondrial respiration, melanin synthesis, cross-linking of collagen, quenching of reactive oxygen species, neurotransmitter development, and more.7 Its utility in these various systems is oftentimes attributed to its unique ability to cycle between the Cu(I) and Cu(II) oxidation states. Thus, it can act as an electron donor or acceptor as redox cycling occurs.

As copper is absorbed by our digestive system, it enters the bloodstream bound by copper carrying proteins such as ceruloplasmin or HSA. The majority of serum copper (70-95%) is bound to ceruloplasmin; however, this copper is not readily exchangeable. HSA, on the other hand, is capable of exchanging copper with cellular copper acquisition proteins, such as the human copper transporter, Ctr1. Once the exchange occurs, Ctr1 can transport Cu(I) across the plasma membrane, for its involvement in intracellular metabolic processes, like the ones mentioned above.

Cu(II) binding to HSA involves the well-characterized ATCUN (amino terminal copper and nickel) binding site, made up of its first three amino acids, Asp-Ala-His. (Figure below) Characteristic of this site are four donor atoms coming from a free -NH2 terminus, a Histidine in the third position (XXH), and two contributing peptide backbone nitrogens. In aqueous environments, the far coordination sphere also includes an axial water molecule as a fifth ligand, which is oftentimes ignored due to its lability and rather long distance from the Cu center. This water molecule is usually undetectable by spectroscopic techniques other than crystallography. The multidentate characteristic of this binding site contributes to highly stable complexes with Cu(II). 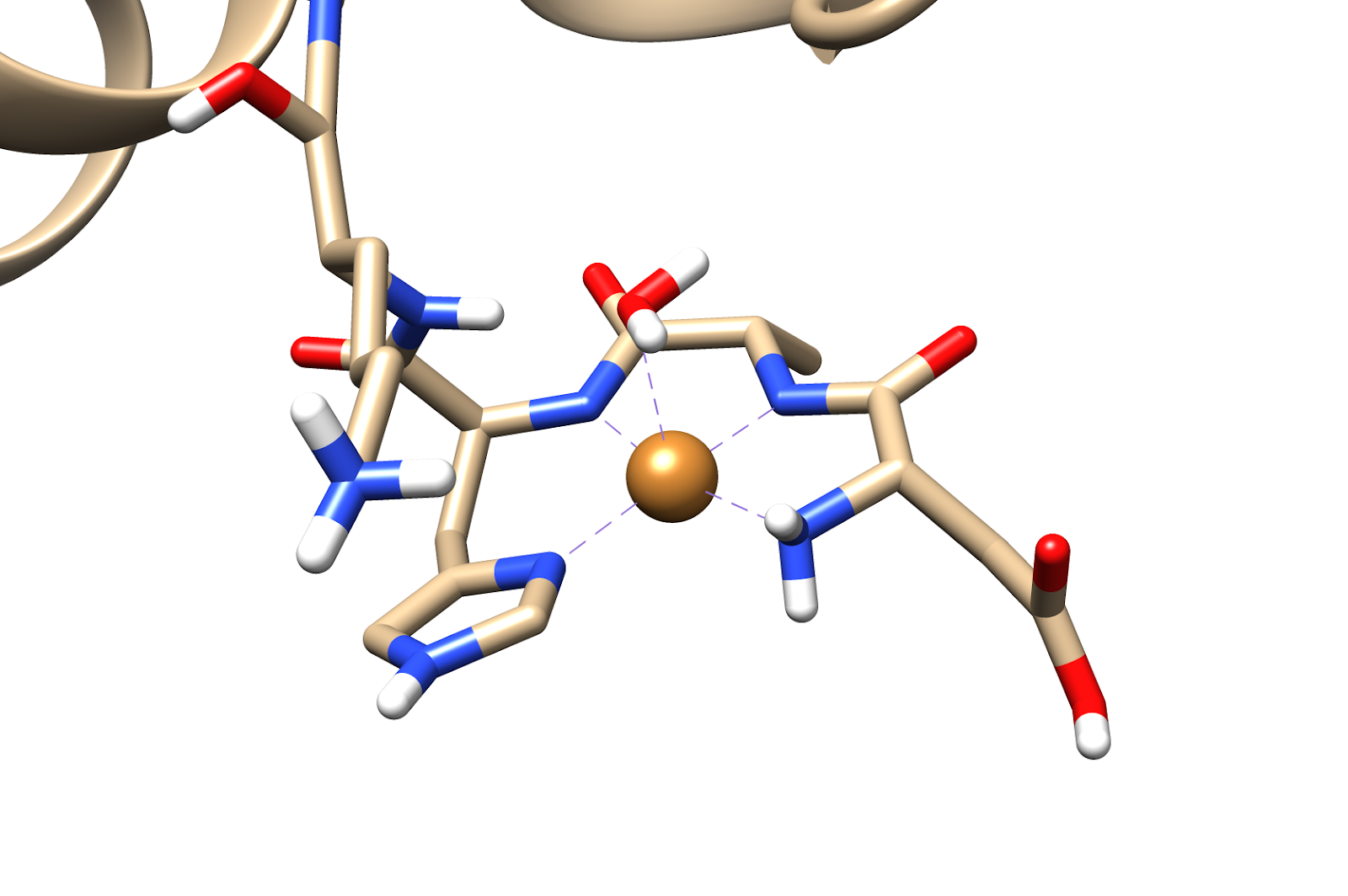 According to Ligand Field Theory (LFT), all of the backbone nitrogen donor atoms at the Cu(II) binding site are classified as sigma donors, which means they are capable of sigma bonding with the metal. The N-terminal amine, and backbone amides are also pi donors, which means they are capable of forming pi bonds with the metal. Pi donors are weak field ligands and favor small Δ. The deporotonated amides are especially strong bases that stabilize the bonding interaction despite that they are weak field ligands. The imidazole nitrogen is both a sigma donor and a pi acceptor, due to its double bonded pi system. This means that the imidazole donor is capable of accepting electrons from the metal ion into its pi* orbitals. Pi-acceptors are strong field ligands and favor large Δ. Therefore, the ATCUN site contains both pi-donor that are strong bases and a pi-acceptor. The presence of both types of ligands helps in making this complex more stable.

LFT predicts that the N-ligands are coordinated around the Cu(II) center with square planar geometry. With four ligands (ignoring the axial H2O), geometry is typically square planar or tetrahedral. A d9 metal, like Cu(II) prefers square planar arrangements due to LFSE. A comparison of tetrahedral and square planar splitting diagrams for d9 metals is shown below.

Comparison of LFSE for d9 metals with 4 coordinating ligands. In the case of d9, the square planar arrangement, with a more negative LFSE is more energetically favorable.

Shown above is a comparison of the d-orbital splitting diagrams of two possible geometries for 4 donor groups around a metal center, as we see in the ATCUN site of HSA. From LFSE calculations, it is clear that in this case, the square planar arrangement is more energetically favorable. (LFSE calculations are shown with an energy scale relative to Δo.) Because Cu(II) is a d9 metal and will always have one unpaired electron, it does not have distinct high or low spin states. However, it should be noted that all square planar complexes favor low spin, because of the large Δ that is a consequence of square planar geometry.

In the presence of ascorbate, a biological reductant, HSA can facilitate Cu reduction from Cu(II)-->Cu(I) oxidation state (Figure below). The precise location of HSA’s Cu(I) binding site is currently unknown, but details of its coordination environment have been elucidated through X-ray absorption spectroscopy.15 This protein’s bidentate Cu(I) binding site is comprised of two Histidine residues, oriented 180° apart approximately 1.89 Å from the Cu center. Although two-coordinate geometry are not usually observed for other first-row transition metal ions, it a common geometry observed when Cu(I) is bound to polypeptides. Since Cu(I) is a d10 metal with no LFSE, it can be oriented in any coordination geometry. Because Cu(I) has a relatively low charge, two ligands can apparently be enough to satisfy it electrostatically.

In the reaction shown in the figure above, Cu(II) gains an electron via the weak reducing agent, Vitamin C. UV-vis spectroscopic techniques are oftentimes employed to monitor Cu(II)-->Cu(I) reduction such as this. This is possible because as a d9 metal, Cu(II) has a d-d transition which absorbs radiation in the UV-vis range. This transition yields a measurable signal. Cu(I), on the other hand, does not have any d-d transitions because all d orbitals are filled, and it is therefore spectroscopically silent. During experimentation, Cu(I) presence is measured by the disappearance of a signal given by Cu(II)’s d-d transitions.

In terms of kinetics, Cu(II) exchanges ligands faster than Cu(I), but Cu(I) is still labile. Both oxidation states allow for little or no LFSE, and both oxidation states have d electrons occupying antibonding molecular orbitals. Both of these factors contribute to increased ligand exchange rate.

Zinc is the second-most abundant transition metal in living systems (iron is the most abundant but does not bind significantly to HSA; rather Fe binds tightly to transferrin in serum).11 Because Zn(II) is effectively a Lewis acid, it serves as a cofactor in many enzymatic reactions. For example, Zn(II) is found at the active site of carbonic anhydrase, which regulates CO2 balance in blood and other tissues.12 Moreover, Zn(II) provides structure to some proteins, as in the case of “zinc fingers.” Zinc fingers are part of transcription factors, which recognize and bind a specific DNA sequence during DNA transcription and replication. Zn also functions in the brain, playing a role in synaptic plasticity and learning. However, it has also been recognized as a neurotoxin in high concentrations; thus, Zn homeostasis is important in sustaining life.11

HSA is involved in Zn homeostasis, and is the primary Zn transport protein in the human circulatory system.8 In many cases, HSA acts as a “zinc buffer,” controlling the amount of free Zn(II) that is available for cellular uptake.10 Interestingly, HSA-Zn binding and HSA-fatty acid binding is interdependent. Upon fatty acid binding, HSA undergoes a conformational change which disturbs the preformed Zn(II) binding site. Therefore, researchers suggest that HSA might facilitate the interplay between extracellular Zn speciation and energy metabolism.14

Zn(II) binds to HSA at what is referred to as the multi-metal binding site, or MBS. This site gets its name for its ability to coordinate a variety of metals including Cu(II), Ni(II), Zn(II) and Cd(II). Thorough spectroscopic investigation of Zn(II) binding to the MBS indicates that the first ligand shell includes two imidazole N’s of His 67 and 247, two carbonyl oxygens of Asn 99 and Asp 249 and a third oxygen from a coordinating water molecule at pH 7.4.9 However, crystal structure data collected at pH 9.0 and representing HSA with a bound Zn ion does not show coordination of Asn 99. (Figure below, pdb.5IJF) Differences in pH are known to result in conformational changes to HSA and could explain the discrepancy in coordinating atoms observed in the crystal structure and in spectroscopic data. 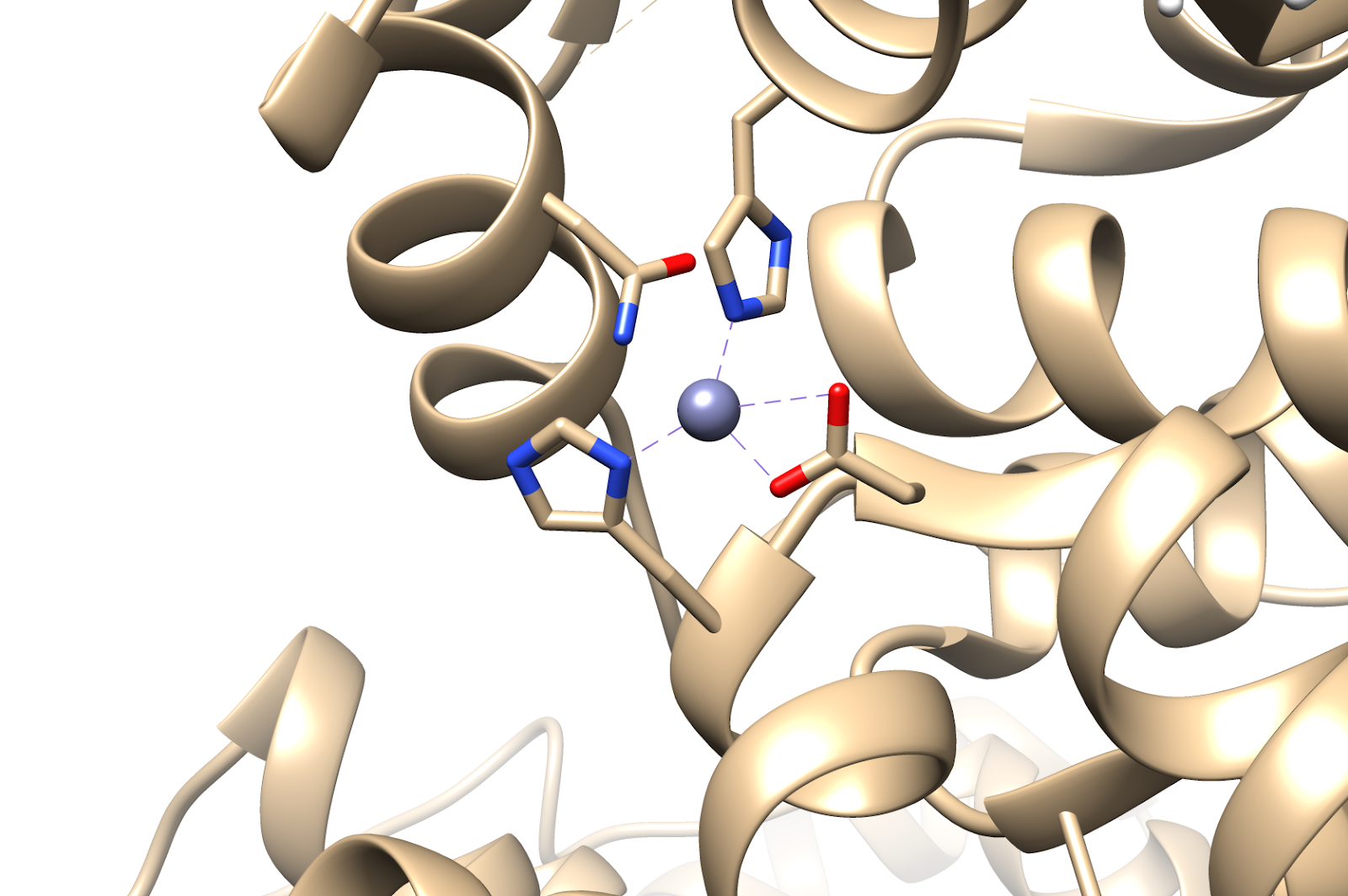 Structure of Zn(II) bound to HSA from PDB 5IJF: Close up of HSA’s Zn(II) binding site at pH 9.0, located at the interface of domains I and II. Other spectroscopic data (collected at pH close to 7) indicates coordination through His 67, His 247, Asp 249, Asn 99, and H2O. In PDB entry 51JF, above, binding is similar, though not involving Asn 99.

The HSAB character of Zn(II) and its coordinating ligands can explain this site’s metal preference. Imidazole nitrogens are borderline bases, and carbonyl groups are hard bases. Zn(II) is typically considered a borderline acid, so it makes sense for these ligands to prefer Zn(II) over a softer acids such as Cu(I) or Cd(II).

Because Zn(II) is a d10 metal, it has zero LFSE. Therefore, LFSE is not a contributing factor when determining the geometry of this binding site. Instead, geometry is determined by the most sterically favorable arrangement of ligands. In the case of 4 coordinate ligand arrangements, tetrahedral geometry, with bond angles of 109.5°, is more sterically favorable than square planar geometry, with bond angles of 90°. It is worth noting that steric factors may also include the structural constraints of the protein itself due to folding or otherwise. Another consequence of zero LFSE is increased lability or rate of ligand exchange, which is essential considering the biological implications of HSA-Zn binding.

As mentioned previously, metal binding to HSA is not only relevant for normal physiological processes, but also in pharmaceuticals. HSA is a target for a variety of metallodrugs, including some for the treatment of cancer.13 Such metal binding occurs at the Cys-34 residue, which is the only Cysteine out of 35 in the protein that is not involved in disulfide bridging.6 Therefore it provides a S-donor that can attract metallodrugs, especially those containing soft metals like Au(I) and Pt(II). Unlike the other metal binding sites, this one is not stabilized by the chelate effect, and binds metals via a single metal-sulfur bond.

This work was originally written by Madison Sendzik, Fall 2017: Madison is currently (as of 2017) a senior chemistry major at Saint Mary's College in Notre Dame, IN. She is the first author on Reference 15 and plans to pursue her Ph.D. in chemistry beginning in Fall 2018.